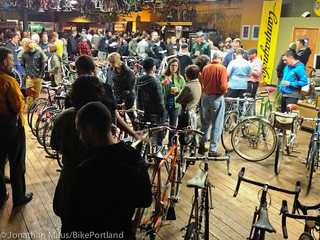 Breadwinner Cycles drew a huge crowd to Velo Cult on Friday night. The event marked the official launch of the company which was started by noted bike builders Tony Pereira and Ira Ryan (we profiled Breadwinner back in February).

At Friday night’s event, the highlight for me was the assemblage of locally owned Ira Ryan Cycles and Pereira Cycles bikes. Tony and Ira invited all their local customers to display their bikes as a way to demonstrate the lineages that produced Breadwinner. It was really cool to see all these custom bikes, banged up and dirty from being ridden on local streets by local riders. There were touring bikes, racing bikes, mountain and city ramblers, and everything in between. I was especially keen to meet the owners Ira and Tony’s first bikes sold in Portland… 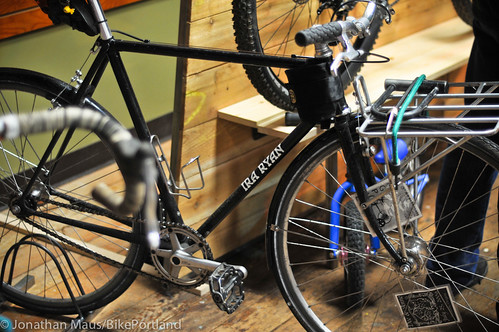 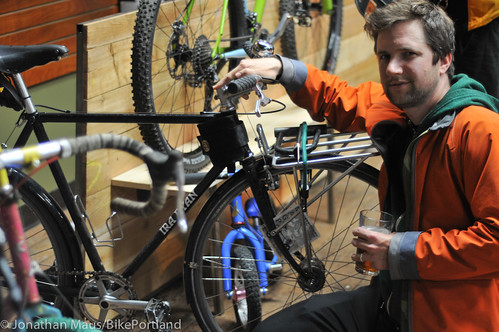 And its owner Dee Branham.

Dee Branham is an old friend of Ira Ryan’s. Ira made this porteur bike for him back in 2004 when they worked as messengers together at Magpie Messenger Collective. Dee still uses this bike as his main delivery vehicle (alternating it with a long-john cargo bike). The bike also has the first front rack Ira ever built. Dee said it has about 100 brazings and took Ira as long to build as the frame. Special touches include a flower bud vase welded to the stem and a bottle opener on the chainstay. Given how hard and how often Dee rides (he said, jokingly, “I’m a terrible cyclist”), it’s a testament to Ira that the bike is still running strong. 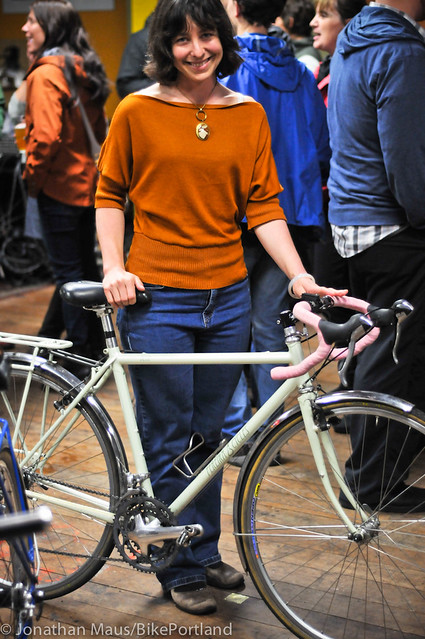 Tony Pereira started his business in Salt Lake City, Utah before opening up a shop in Portland in late 2005. His first customer here was Beth Raisman. She came across Tony’s website, saw a bicycle he’d built for his wife (Lucy Burningham) and decided to put in the order. Back then, she remembered, Tony was working out of the back of an auto body shop in Sandy Blvd. Beth has taken her Pereira on many adventures since then including Seattle-to-Portland and several bike-camping trips. “It’s my beautiful, comfy, girlie bike!” she said Friday night, as happily as if she’d just gotten the bike yesterday.

Here are a few more photos from the event: 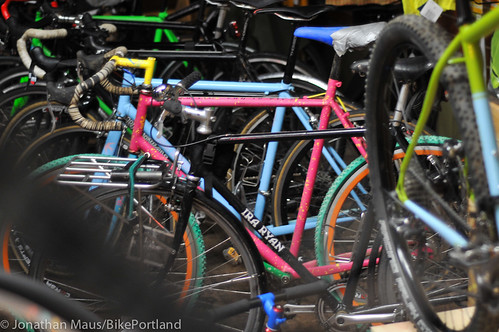 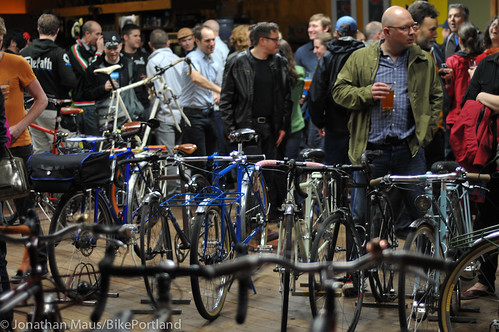 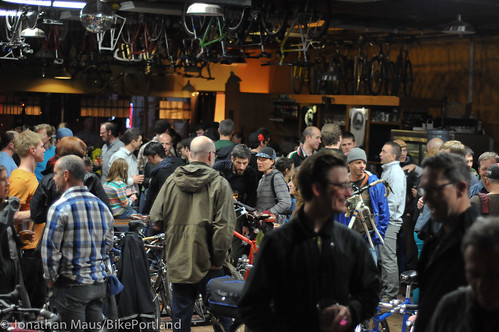 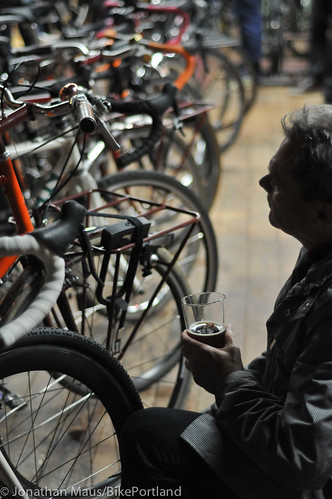 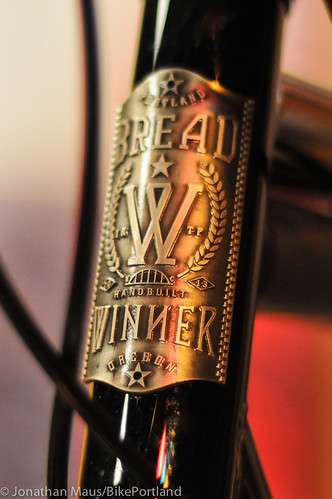 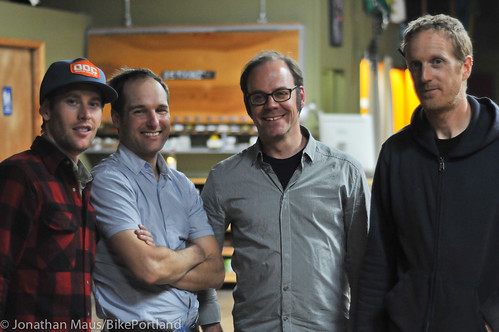 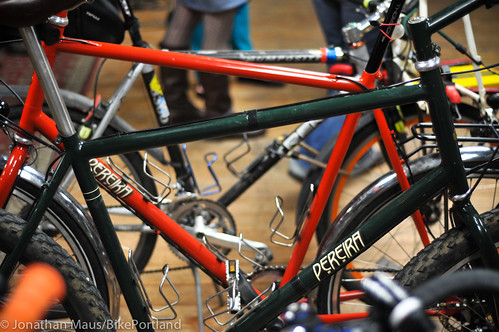 The story behind these two Pereiras is worth telling. Their 6′ 8″ owner Harrison Fishback got the green one stolen, so he got another one. Then the green one was recovered so now he has two! 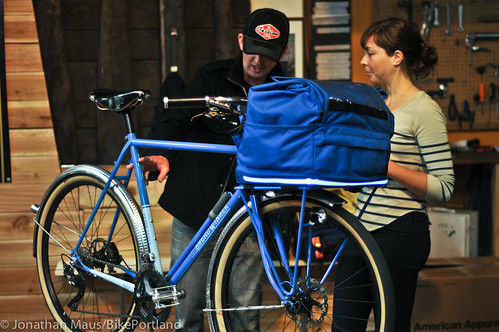 You can’t tell in this photo, but Breadwinner debuted the new Blaq Design porteur bag with an integrated flashing LED light at the bottom. 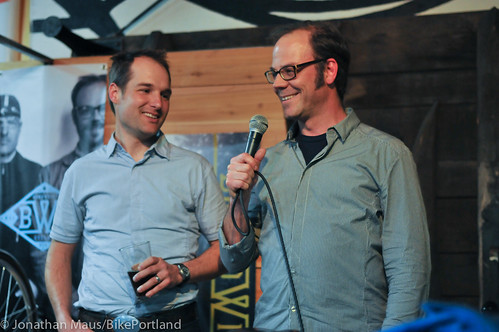 I look forward to watching the evolution of Tony, Ira, and Breadwinner. Starting a production bike company with a full line of bikes and a promise to deliver in just a few months is much different making bikes for one customer, one at a time; but these guys aren’t afraid to dream big. And after all, they both once dreamed of having their own successful bike brand, and look at how that turned out.

Cyclepath is excited to announce that we are now selling Breadwinner Cycles here at the shop. Thanks again to Ira and Tony for giving us the opportunity to support them by providing our customers with beautifully crafted steel bicycles manufactured right here in Portland, OR.

Hmmm. Judging by all the pints, are you sure the title shouldn’t be:
“Beer draws huge crowds” 🙂

We ran out of pint glasses!

Ira and Tony are great people, bikes are great things, beers are great drinks and Velo Cult is a super fun place to be. Good times.

john
Hmmm. Judging by all the pints, are you sure the title shouldn’t be:
“Beer draws huge crowds” 🙂
Recommended 2

If that was the case they’d have huge crowds every night.

Thanks everyone for coming! It was so much fun. Amazing to see all the bikes and their owners in one place. We are feeling the love from Portland. You guys are the best!

We just got a load of the Breadwinner T-shirts at Cyclepath today! Frames will be rolling in the door in about 2-3 weeks. we are excited to say the least!