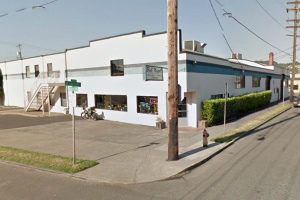 Islabikes, a well-known brand from the U.K., is the latest bicycle company to chose Portland for their North American headquarters. The company plans to begin selling their full range of children’s bicycles from a 5,200 square-foot building on the corner of SE 7th Avenue and Lincoln next month.

Islabikes was founded in 2006 by Isla Rowntree. The company started from a small old barn and now employs 19 full-time staff from a new home in Shropshire, England. The North American operation is being run by Tim Goodall, who has worked with Rowntree since the company started. I spoke with Goodall this morning to learn more about Islabikes and how they ended up in Portland.

Goodall says Rowntree, 43, started in the bike business as product manager for a large bike retailer in the UK. “She was often asked for her recommendations for decent children’s bikes,” explains Goodall, “When she looked, there wasn’t anything she could wholeheartedly recommend, so a flip switched in her brain.” Rowntree was an accomplished racer in her day and she’s still involved in the day-to-day operations of the company.

Islabikes has grown steadily every year since 2006 and has successfully expanded their business across Europe. The company has a direct-to-consumer model (meaning they don’t sell through bike shops). That’s important, says Goodall, because it allows them to have better customer service, insure proper bike set-up, and keep their bikes affordable. 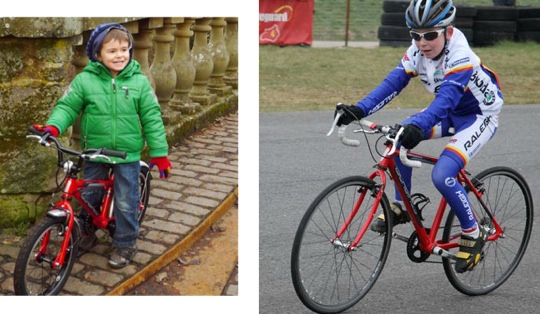 Goodall says after Europe, North America is where they get most of their calls from people wanting to buy an Islabike. “We’ve always said no. Partly because we’ve been so busy in the U.K. we were afraid we couldn’t provide good customer service.” But Goodall says they’ve long known the North American market is ripe for their bikes, so two years ago they made the decision to come here.

The way Goodall tells it, they opened up a map of America and thought, “This is a huge country! Where on earth are we going to locate?”

From a business and logistics perspective (the bikes are made in Vietnam), Goodall and Rowntree realized the west coast made the most sense. They started looking in California and after Rowntree visited a few prospective sites, Goodall says she came back and “She was just flat. It just didn’t feel like it was the right place. So we said, let’s look at Oregon.”

Goodall and Rowntree visited Oregon last summer and spent time in The Dalles, Hood River, Portland, Eugene and Salem. “We just loved Portland,” recalls Goodall. “We were here for three days and instinctively, we just knew it was right.” They returned last October and signed a lease on 2113 SE 7th Avenue (just one block away from the headquarters of Showers Pass Clothing). 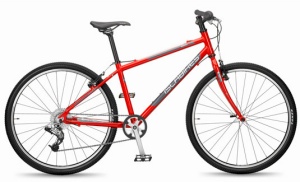 Goodall uprooted his life in the UK to establish the U.S. office. Where Islabikes set up shop was important from a personal perspective, not just a business one. “It came down to a personal lifestyle choice. Ultimately, it was Portland where I really wanted to live.” Goodall says he loves the city’s culture and of course, “It’s a fantastic place for cycling.” “For an American city,” he adds, “There’s a very European feel to it.”

Islabikes plans to have a showroom and fitting studio open for business by April 15th. Their location will also be used as a warehouse, customer service center, and workshop to assemble bikes prior to shipping them out. Goodall has already hired one employee that will start Monday and plans to add more as business grows.

People interested in the bikes can look online or in the showroom and then make an appointment with their child to get fitted and do test rides. Goodall said they take fit very seriously and like to double-check it with parents before the final sale. Because of that, they don’t offer online ordering. All orders are finalized either in person or on the phone (after filling out an order form you can print from their website). 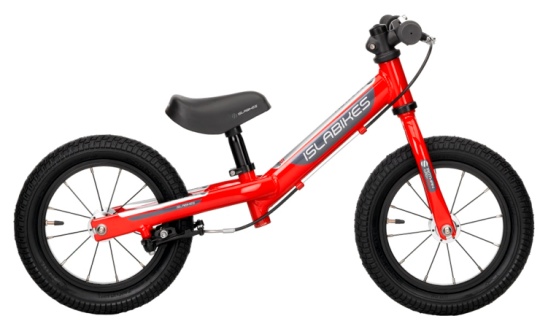 And the “Beinn” 20-inch wheeled junior bike shown with optional rack and fenders: 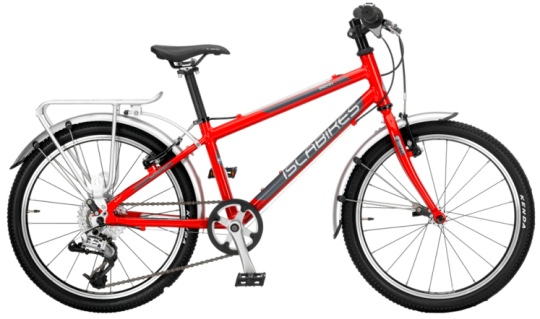 This is the 26-inch “Luath” which can be set up as a road, cyclocross, or touring bike: 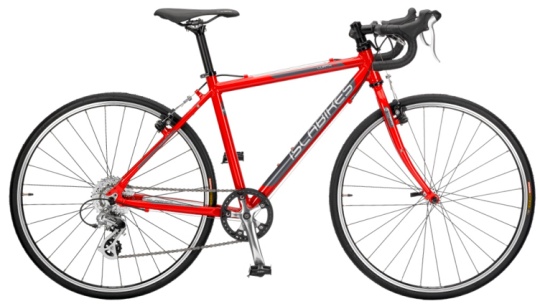 All of Islabikes road handlebars come with top-mount levers: 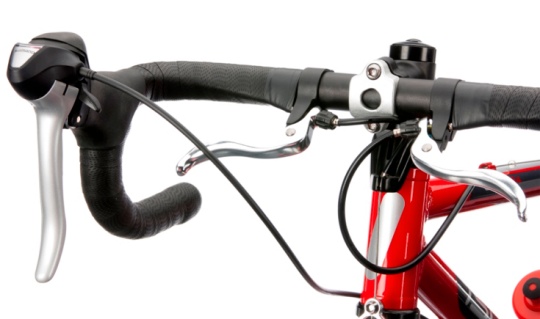 Goodall says what sets Islabikes apart (besides having a range of 11 child-specific bikes) are three key things: weight, ergonomics, and quality of the components. To keep weight down (their largest, 26-inch bike weighs 21.7 lbs), they use aluminum as a frame material and use specially-drawn tubesets that are thinner than adult bikes, yet plenty strong. More weight savings come from “scaled-down components” and parts they’ve designed and developed themselves. They make their own handlebars, grips, brake levers, rims, and even saddles to work well specifically for smaller, lighter bodies.

Many people buy children’s bikes several sizes too big, thinking the bike will last longer. But Goodall warns that can make the bike unsafe and unpleasant to ride. Islabikes offers a buy-back program, but Islabikes hold their resale value so strongly, Goodall says people generally sell used ones on eBay and Craigslist as their children move up through the range.

Check out Islabikes.com for more info.

make proper lighting available, and they will be perfect!

Agree with Lynne above: Add a fixed light front and back, plus on the kid models, a very sturdy place on back to affix the flag! Good luck and welcome to Portland!!

“…they don’t sell through bike shops…because it allows them to have better customer service, insure proper bike set-up, and keep their bikes affordable.”
As a 12-year bike shop veteran I can see the argument as to price, but the bar for cycling retail is pretty high in Portland and shops in many US markets are also raising the quality of the cycling retail experience. I can name at least half a dozen shops here in Portland that “get it” when it comes to customer service and fitting. Ms. Goodall might be surprised with the positive exposure her brand would garner by strategic partnering with a few bike shops in this country.
But all that aside, I welcome Isla to the US and Portland. As a parent and cyclist I feel this is great news for the next generation.

Here’s a question: are they donating to the BTA Auction? What better way to say hello then have one of their kids bikes at “Alice Grows Up!”. Nice ad placement on BikePortland BTA!

These (and they) sound awesome, welcome! But really, an all Flash site I can’t see on my iPhone? Tch tch…

islabikes.com works fine on my iPhone 4s – no flash.

Can’t wait for these guys to open. The choices I’ve seen in kids bikes has been pretty limited. So excited to see what they have to offer!

They lost me at “…made in Vietnam.” When are we going to stop celebrating businesses claiming Portland cred, while making their stuff overseas, as a “win?”

It is much easier for children to transition from tricycles to fixed-gear bicycles, because they already have mastered the art of pedaling fixed, and need only conquer the balance thing.

And not even God could teach a five-year-old to master the dreadful monkey business of a derailleur! Indeed, very few adult commuters have done so, instead employing accumulated gop and gook on the jockey rollers as almost instant single-speed conversions.

Chain-flipping transmissions, the default choice in the USA, are worse than cars and potholes as barriers to practical cycling.

First: I have no connection with Islabikes
Second: Using a Sport England grant, we bought a number of Islabikes for our club, ranging from Bein 20″ small to Luath 700 large, because they are the best value/quality going (sorry, Trek, Scott, etc.)
They are brilliant
We loan them out on our Kids Club sessions (free) and charge a nominal £1 when they borrow them for races and they take a lot of punishment (or they would if we weren’t such wonderfully skilled coaches 😉
They are brilliant
As has been said, they predominate in bike races for the younger end especially
They are brilliant
We find that parents bite the bullet and flash the plastic for their kids next bike because of (a) the quality and (b) the resale value – on Ebay, an 18/24 month old Islabike can fetch between 80% and 90% of the original purchase price (they go like hot cakes), so their annualised cost is pretty low.
They are brilliant
Their newer models are about 0.5 kilo (ask a Canadian) lighter than ours.
They are brilliant
Apart from the Creig 26, they don’t have any suspension. It would make them heavier and I and my fellow coaches (currently 8) are firmly of the opinion that it’s better for children to learn bike handling skills over rough ground at the slightly lower speeds enforced by rigid forks before moving on to suspension.
By the way, did I already mention? They are brilliant

Giving your kid(s) an Islabike? Priceless. (If you don’t have that advert over there, I’m afraid that cultural reference is pointless)

Islabikes is great. I don’t think the fit is needed before buying though but is a good step if you live there in PDX. I bought a CNOC 16 for my 2 1/2 year old 2 1/2 years ago off Ebay UK and had it shipped here to CA. A nice ebayer cut me some slack and the price was about the same as buying a new bike here. My son took 10 seconds to ride it moving from a strider. You don;t need training wheels or a trike first– a walking stryder or Rothan are perfect for 1 1/2 year olds up to gain independence have fun and learn balance. You don;t even have to teach anything but breaking and safety that way– and they learn cornering and balance which is not possible on a tricycle or bike with training wheels… if they never use them they never need them. Thanks for coming to America! Our bikes are too heavy and yours are truly easy to work on with the components

Just today bought a Beinn 24 for my granddaughter and a Beinn 26 small for my grandson. By FAR the best-quality, intelligently-designed bikes for kids. I found these by accident, and so glad. I was determined to find a simple non-suspension bike for the kids.

I bought an Islabike Beinn 24″ for my son who just recently learned how to ride without training wheels, coming off of a Raleigh 16″. I think the Beinn is about the same weight as the Raleigh! My son loves his bike and I am very happy with the quality of the bike and the kid-sized components.

Apparently Islabike USA does a fair amount of business shipping bikes. We live in Austin, TX and had our bike shipped from the Portland store. Shipping took one week.

Started with a CNOC and moved to a Beinn 20 large, my now 7 yo is a pretty skilled rider and now ready for a Beinn 24. He rips up and down hills with me here on Kodiak Island, Alaska, and is an accomplished rider who recently said: “dad I want to ride my bike around the world”.