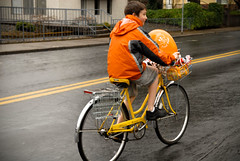 A bill to increase the minimum
helmet age was discussed in a
Senate hearing earlier this week.
(Photo © J. Maus/BikePortland)

The two bicycle helmet bills in the Oregon legislature made more waves in the media than in actual debate from lawmakers during a hearing held in Salem on Monday. The bills garnered media attention because they were an opportunity to pit the safety of our children (who could be against that?!) against bicycle advocates who feel mandatory helmet laws are not always what they’re cracked up to be.

At the hearing on Monday even the Senator behind SB 741 and 742, Chris Edwards, seemed a bit uncomfortable with all the attention they’ve gotten. Toward the end of the hearing he said, “This bill is getting a disproportionate amount of focus.”

In a nutshell, SB 741 would mandate that people of all ages wear helmets while riding a bicycle (or scooter, skateboard, and so on) in competition and SB 742 would raise the minimum mandatory helmet age from 16 to 18 years of age.

At the outset of the meeting, Edwards described the visit with a friend that led to his drafting of the bills. The friend’s son fell while riding his skateboard and during a discussion of the incident the Senator learned that some competitions don’t require helmets. That conversation also led to Sen. Edwards’ realization that kids under 16 aren’t required to wear a helmet. “I had assumed it was 18,” he told members of the Senate Business and Transportation Committee.

SB 741 isn’t too controversial because every sanctioned bicycle competition I’ve ever heard of already has mandatory helmet laws for participants. For that reason, the Bicycle Transportation Alliance (BTA) does not oppose the bill. But the language of the bill is very problematic and could have unintended consequences. It calls for helmet use while in “organized exhibitions” but it doesn’t clearly defined what that means. Thankfully, Sen. Edwards is already aware of that issue and said he plans on striking that text. During his testimony, the Senator also made it clear he’s heard concerns that helmet laws reduce ridership which works against the safety in numbers phenomenon. “To the extent a helmet decreases ridership,” he said, “it hurts the critical needed to achieve that [safety in numbers].”

So, while Edwards says, “Ultimately, I’m wanting to encourage a culture of safety among kids riding skateboards and bikes,” it seems he has learned a few things about helmet policy of late.

When Senate committee members got their chance to speak, it was a textbook example of how the helmet law conversation always goes. “I’m a bicycle rider and I always wear a helmet,” Sen Rod Monroe proclaimed, “I had a pretty bad crash 10 years ago and if I didn’t have my helmet on I would have had a severe concussion at the very least. I believe in helmets.” (He then questioned the validity of the claim that helmet laws reduce ridership.) In the end, Monroe acknowledged that even though raising the minimum helmet age wouldn’t “make a huge difference,” he would still vote for the bill. “I just believe in safety and I support it.”

Senator Bruce Starr made the point that education and cultural awareness alone might be all we need to increase helmet use, saying he remembers when very few adults wore helmets. But now, “Almost everyone does even though there’s no law.” (He’s right, about 80% of Portland riders where helmets according to the most recent numbers.) Committee Chair Lee Beyer added “He’s right. It’s accepted now. It’s cool.”

BTA lobbyist Jonathan Manton testified that they are opposed to raising the helmet requirement age. The BTA has concerns because they say the law could reduce ridership, that some of its members think such regulation is “the improper role of government,” and the law would have a disproportionate impact on low-income populations. “Some people can’t afford a helmet so they won’t ride,” he said. “What we find is that education of middle school students through our Safe Routes to School programs are more effective in increasing helmet use than a state law that requires it.”

As for the age itself, Manton said the BTA feels 16 is appropriate, “Because it’s the same age you get a driver’s license and at 16 you’re able to operate a 2-ton car and drive down the road very fast.”

“It seems it’d be safer to make the driver’s license age 18,” chimed in Sen. Monroe as a light seemed to go off in his head, “I remember when I started driving at 16 and we’d drive like hell all over town!” Monroe is on to something, and there’s actually a grassroots movement afoot in Eugene to do just that.

The final person to testify was Nick Oliver, the executive director of BikePAC, a rights group for motorcycle riders. He said helmet proponents use scare tactics and his group worries that helmet laws are “about nanny state mentality.”

By this time in the hearing it was clear that neither bill seemed urgent enough to committee members to vote on. “We will allow Senator Edwards to think about it,” said Chair Beyer, before closing the discussion.

Browse more coverage of the 2013 legislative session in our archives.

Another unexplored issue: How the proposed bike-sharing system would interact with helmet laws. Would somebody under the age be prohibited from using bike-share unless they showed up with their own helmet? Alta does not provide helmets with their bikes in the other cities in which they operate bike-sharing services…

Awesome. Nothing more to add.

The answer to increasing helmet use? Make it ‘cool’, not mandatory. The same is being done in skiing, snowboarding, skateboarding, kitesurfing, wing-suiting, etc….

The answer is to make helmets mandatory for drivers and passengers in cars. Same roads, same rules, right? (And there’s plenty of head injuries in auto crashes.)

Astonishing that 80% of riders already wear helmets, and a demonstration of the power of pro-helmet propaganda, given that the most reliable evidence shows that they don’t reduce risk, and there is some evidence to show that they increase risk. Or perhaps its a demonstration that most people are more gullible than they could possibly admit.

Check out cyclehelmets.org for the facts rather than the urban myths.

When the Senator says, “I had a pretty bad crash 10 years ago and if I didn’t have my helmet on I would have had a severe concussion at the very least. I believe in helmets.” he reveals an ignorance that is quite common. First, that helmets prevent concussions (helmets cannot prevent concussions) and second, that wearing helmets prevent injuries (this cannot be confirmed in data, in fact it may be possible wearing helmets encourage reckless behaviour that increases the likelihood of injuries)

Chris I
Reply to  Brad

This study of the West Virginia pediatric population demonstrates findings similar to prior studies looking at the effectiveness of helmets in preventing injuries during a bicycle crash. Bicycle helmets were shown to significantly reduce the rates of both skull fractures and intracranial hemorrhage. Based on this, the expanded use of helmets within the pediatric population should continue to be encouraged both from an educational and legislative standpoint.

Chris I
Reply to  Brad

Oh ya, and this part:

Todd Boulanger
Reply to  Chris I

The findings of this study and many others is limited in how the results should be used in framing this transportation policy discussion:
1) is it better to hit your head in a crash when wearing a helmet (usually), but
2) is it better to design safe low speed bikeways and complete streets and avoid the crash to begin with (most defiantly).

Work on option 2 first before option 1 – if your community wants more than 1% to 5% bicycle mode split.

And note that we have some real-world experiments, where we have tried #1 in some countries, and #2 in some others and we can (and have) measured outcomes. #2 gets more people on bikes AND results in a lower injury rate.

Hey! That boy in the photo looks like our oldest: once known on the streets as the “Dread Pirate Roberts” now Stuart “Stucat” Jackson jazz musician and off to college in a few months. Boy how time flies when you are …riding a bike.

And speaking of helmet laws… it would be great to know what the current stats on the Vancouver Helmet law is…how many lives have been saved and tickets issued, warnings … Police resources expended, etc. Time to do a review as to its effectiveness.

Nobody promoting helmets ever mentions the underlying assumption, which is that taking an ordinary bike ride is a HUGE risk for a serious head injury. But its NOT a huge risk! Except for scrapes, injuries are rare. Bike riders are a tiny part of the country’s serious head injuries – look it up! Walkers get way more head injuries than bikers, even per mile, and people in cars even more.

But people like BTA don’t oppose any helmet bills. They’re just fine with pretending riding a bike is SO deadly! Are they on the take from Nutcase?

How about we stop the doom and gloom? Read this guy:
http://mighkwilson.com/2009/10/which-cycling-politics-doom-or-possibility/

There was a recent related discussion of brain injury on NPR:

It started later on:

FLATOW: There was a separate study that came out this week that said there’s no good evidence that helmets really protect athletes from concussions. It said that helmets protect the skull, but not necessarily the brain. Explain how that works…

Assuming you’re asking the question non-rhetorically, it’s not hard to explain. What hurts your brain is sharp acceleration; what breaks your skull is a sharp concentrated force. The helmet gets rid of the sharp concentrated force very effectively, but is only somewhat effective at reducing acceleration. It does this by spreading the acceleration out over time; it starts sooner when the helmet first contacts an obstacle, and continues longer as the padding is compressed.

Contrary to the slogan I’ve heard at least once, a helmet is not your first line of defense — it is the last line of defense against TBI, and it is “deployed” in a tightly constrained situation where there’s limits to how much it can do. Given that we already know that it is possible to dramatically reduce the rate of bicycle crashes (e.g., the Netherlands), we should focus our efforts on that instead.

A different, and somewhat more accurate angle on helmet laws is that helmet laws forbid people from riding bicycles (unless, of course they are wearing a helmet).

This is what a helmet law means, that is is better to not ride a bike at all, than ride a bike without a helmet.

What cycling advocate can back that statement?

It doesn’t really matter what you believe about helmet safety. If you are in an accident of any kind that is reported, the media will note whether or not you were wearing a helmet. If you weren’t, you will receive blame.