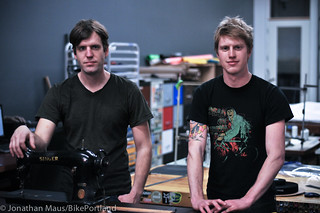 Jeremy Neal (L) and Paul Johnson of Blaq Design
at their shop on SE 11th and Division.
(Photos © J. Maus/BikePortland)

You know the local bike industry is healthy when niches are created within niches. That seems to be what’s happening now in Portland’s thriving cargo bike scene. Made up of advocates, builders, retailers, and buyers, our local cargo bike industry is alive and well.

Blaq Design is just one local business riding the wave.

Paul Johnson and Jeremy Neal are the men behind Blaq. They moved to Portland from Ohio back in 2010 and have been gaining a strong foothold ever since by making both stock and custom messenger bags, backpacks and other products. By 2010, Portland’s cargo bike industry was already several years old and Johnson and Neal wasted no time getting involved with it. At the Oregon Handmade Bicycle Show that year, they debuted an innovative fabric cargo bin created through a collaboration with Joe Bike owner Joe Doebele. 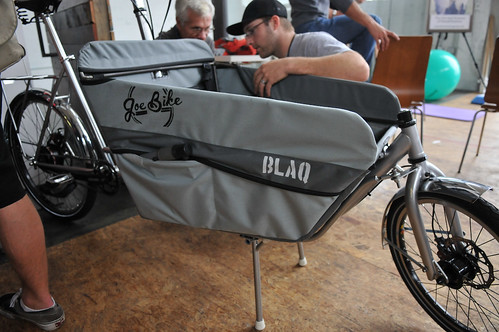 The Blaq/Joe-Bike collaboration that debuted at the 2010 Oregon Handmade Bike Show. 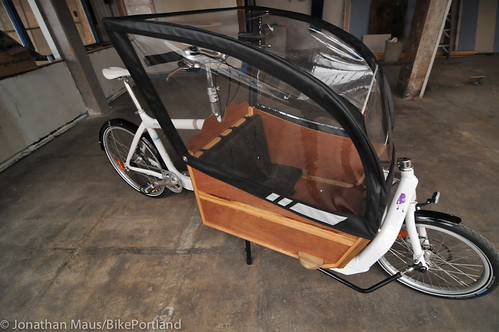 The latest version of the Blaq canopy on a Larry vs. Harry Bullitt (that has a custom wooden bin).

Blaq would collaborate again with Doebele on a canopy for his Shuttlebug cargo bike (which has since ceased production). The Shuttlebug, like many popular cargo bikes, has large bin in front which is perfect for kids and groceries. The only problem is when it’s rainy and/or cold, the contents of the bin have no protection. That’s where a canopy comes in. As these type of bikes have become more and more popular in Portland, so too has demand for canopies to protect precious cargo from the elements.

Doebele noted the need for a better canopy design after realizing that the only ones on the market came from Holland via the legendary Bakfiets brand or via cheap Chinese knockoffs of the Bakfiets model. So, with some key design tweaks and Blaq in his corner to execute them, Doebele helped pioneer a new design for use on his Shuttlebugs.

With Doebele no longer making the Shuttlebug, Johnson and Neal have continued to improve the canopy design and they’ve found a healthy market for them. They currently make canopies as original equipment (OEM) on bikes from CETMA, Metrofiets, and Larry vs Harry.

Blaq canopy on a CETMA.
(Photo by Blaq Design) 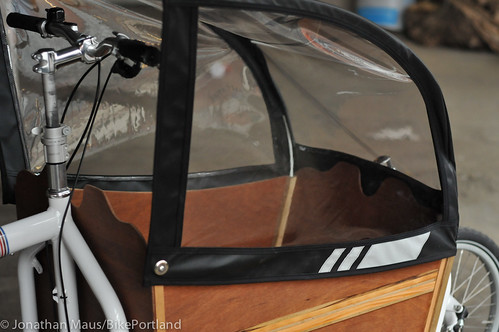 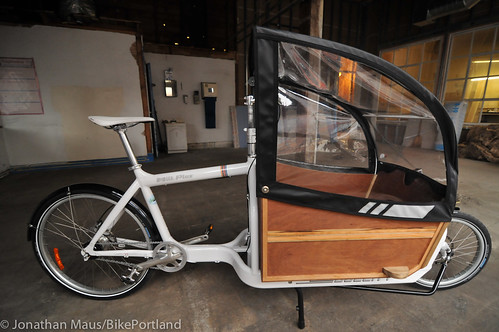 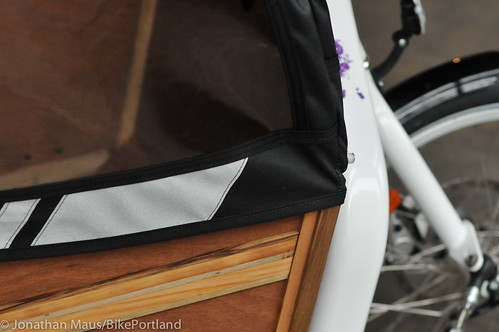 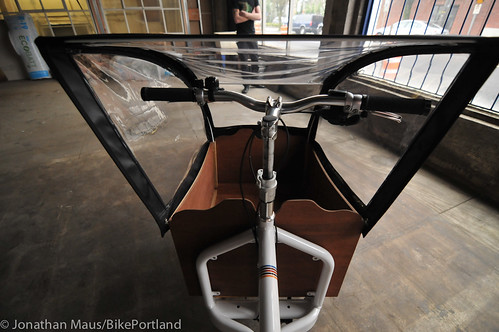 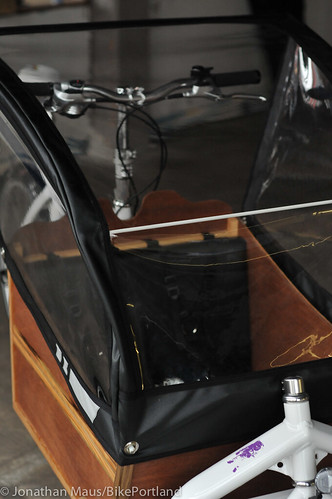 The Blaq canopy is different from others on the market in some key ways: It’s taller so it fits well over your hands while on the bars and gives kiddos with helmets on plenty of room without rubbing against the tpo; the large rear opening also gives the rider better access into the bin and also improves airflow; and there are integrated pockets on the inside of the canopy. The frame is held together with fiberglass poles that are under tension and the canopy is tethered to the bike via heavy-duty grommets. It’s made from gunboat sail material so it’s very durable.

“This is a market we never would have never seen before. We sort of stumbled into it.”— Jeremy Neal, Blaq Design

Price for a stock canopy is $250 and they offer custom creations starting at $300. Install doesn’t take long and Johnson says people can just roll on in with their bike and get one while they wait.

“This is a market we never would have never seen before,” said Neal during a recent visit to their shop near SE 11th and Division, “We sort of stumbled into it and it’s grown organically once people started hearing we were the canopy people.”

For Jessica Roberts, a north Portland resident and mom of a 3 1/2 year old, the Blaq canopy was an upgrade from a stock Bakfiets canopy. Roberts likes the “clamshell loading” of the Blaq design because it makes loading in her son Calvin and her Brompton much easier. “And the open back is great for conversations,” she says, adding that it still has enough hangover to keep Calvin dry in the rain. “And when we do add a second kid to the bench, there’s scads of room for both of their little heads. Just a great product.”

In just two years, canopies now make up 20% of Blaq’s total sales. Neal says they’ve made about 100 canopies so far and orders keep coming in. The strong response now has Neal and Johnson already thinking of an expanded Blaq Cargo line of product that will include tonneau covers, full bike covers (a customer in Japan has already ordered one), fabric seats (for inside cargo bins), seatbelt straps, and more.

— Check out great photos of a Blaq canopy installation from Shane MacRhodes in Eugene and learn more at BlaqDesign.com

We love our blaq canopy! We had the stock one on our Bakfiets but the third kid in the front bench seat was squished and it wasn’t a very convenient cover to get in and out of. This design is really great. Had a couple snapped poles at the beginning but the new bracket that they redesigned are much better.
Maybe they could create some Xtracycle components too since those are some of the most prevalent cargo bikes out there…. Maybe even a cover?

Hey, mine doesn’t have any pockets! Maybe that’s no longer standard? Still, we love it. Very glad I chose green so that the bakfiets is ready for Saturday’s Kidical Mass ride in the Sellwood St. Pat’s parade. (plug, plug)

This story is more significant, I think, than most readers would guess. When we were selling the Boxbike, we were surprised at how important a viable canopy was to customers as they shopped around. They viewed it as an integral part of the bike, not just as an accessory (while our customers in the Southwest viewed the shade version of the same structure as equally essential). So this particularly well-made canopy is helping more families choose to go this route than we’d otherwise be seeing. And I’ve heard some have been exported to Denmark, which is a statement in itself.

More importantly, does all this suggest that owners of longtail cargo bikes, which don’t have a cover, are a hardier breed?

One small note: Though I eventually gave my business to Blaq, I feel like a sail maker named Erik Waagmeester, of Waagmeester Canvas Products on Alberta St., deserves credit for his design and production work in 2009. There aren’t many places you can go to watch a 50-foot sail being made these days, but that place, which has been there for three or four generations, is one of them. Working with this very old company on the one hand and, on the other, the new arrivals at Blaq was a great and reassuring experience.

I just ordered a custom canopy via Splendid Cycles. It will be just like the standard Blaq canopy for Bullitt bikes but in all reflective fabric. Woo hoo!

I have their v3 platform straps on my commuter and road bike. The straps are well made and work great.

I live and ride in Tucson with my three-year-old daughter and 5-month-old son. We contacted Blaq and had them make us a cover.

They were able to make us a cover that had a detachable vinyl front window so that in the summer we could keep the cover on with a mesh insert for shade that would let the air circulate.

When it’s cold (yes that happens here) or rainly (less so) we can put the vinyl panel back on and keep our kids protected from the elements.