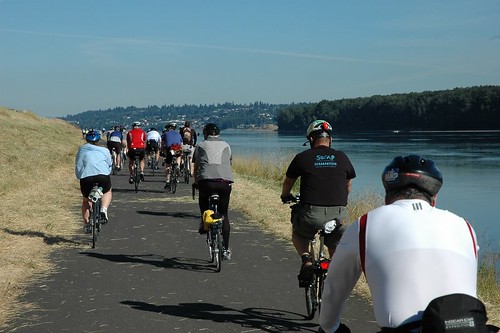 Marine Drive and its adjacent mulit-use path along the Columbia River is a popular place to ride; but tighter federal levee regulations might impact future access.
(Photo © J. Maus/BikePortland)

“I don’t think there’s an immediate concern from a bicycling standpoint. But, we can’t be confident how they’ll be dealt with in the future.”
— Reed Wagner, executive director Multnomah County Drainage District

The cover story in last week’s Portland Tribune caused several readers to email us with concerns that bike access on Marine Drive might be curtailed or prohibited in the future. The story, Levee holds back flood of changes outlined tighter safety regulations by the Army Corps of Engineers prompted by levee failures during Hurricane Katrina in 2005. The Corps now require all levees across the country go through a process of re-certification that introduces much tighter standards about what type of development is allowed on them.

Marine Drive is a key part of many people’s regular bike riding habit. While some folks stay on the road, using it to connect to riding in the Gorge and Sandy River area, others use the multi-use path that’s just yards from the banks of the Columbia River.

Here’s the part of the article that raised some eyebrows:

“Motorists, bicyclists and joggers enjoying Columbia River views along Marine Drive may not realize it, but they’re traveling atop a mound of sand that’s the main bulwark against massive flooding of North and Northeast Portland…

Now, in response to levee failures in New Orleans during Hurricane Katrina, federal authorities say thousands of trees, buildings and other structures permitted in past decades atop the Columbia River levee pose safety concerns — and may need to be removed or altered.”

And a photo that ran in the story showed someone riding a bike and had the caption,

“The U.S. Army Corps of Engineers says the bike path and thousands of trees, utility poles and even buildings erected on the Columbia River levee pose safety concerns and may need to be removed.”

Concerned about the potential of losing bike access on Marine Drive, we called Reed Wagner, executive director of the Multnomah County Drainage District (the local agency in charge of maintaining the levee). Wagner explained that, “Encroachments [things built upon the levee itself] in the past that were OK are no longer OK.” However, Wagner said he doesn’t think it’s time to panic. Yet.

“I’m a biker too, and I bike along Marine Drive myself [he’s also former policy director at Metro, so he understands bike path issues]; and I don’t think there’s an immediate concern from a bicycling standpoint.” “But,” Wagner added, “What I can’t say definitely is that at some point that could change… We can’t be confident how they’ll be dealt with in the future.”

Wagner explained that in the next 2-4 years (re-certification is due in two years for the area west of NE 33rd, and four years east of 33rd) he and his staff will come up with a plan for re-certifying the levee. While he said he’s “pretty confident” they won’t have any major encroachment issues that would prohibit bike access, he did not rule it out. Since Katrina, the federal government is taking a much more stringent and conservative approach to levee encroachments. “The Corps standards prefer no development on the levee at all,” said Wagner. So right now, Wagner’s job is to apply the federal standards to our local situation. Like many issues where the feds are strict (Homeland Security), it’s a balance for local officials to weigh federal concerns with practical needs of citizens.

About the tighter regulations, Wagner said, “We want to make sure we’re not overdoing it at risk of our community values. But to the extent it [the federal stance on levee encroachments] continues to trend in a more conservative way, it could challenge some of those values.”

— We’ll track this issue as it unfolds. Stay tuned.

Many levee systems across the country have MUPs built on them and adjacent recreation facilities such as parks. I imagine that the majority of these will be grandfathered in. I’d be more worried that if a flood destroyed a levee, the subsequent re-build would not include these “encroachments”.

In Omaha, Nebraska the MUPs are inside the levees as well.

While this is not optimal for cycling during flood situations it is a very efficient use of land that can not be used for anything else.
The nicest thing about that layout is that when the MUP crosses a road the road is on a bridge elevated above the sacrificial flood plain while bike traffic sails by unimpeded underneath.

So we’re worried about that wee bike path on the levee? What about that major roadway with heavy trucks on it? That isn’t even mentioned.

I tend to only address bicycle impacts here; but obviously the roadway is a concern for more than just biking.

And yes, the concern is about having structures (of any kind, including trees, buildings, roads, and so on) on the levee, not simply about river levels rising.

Got ya. It seemed suspiciously absent so it was a bit misleading in my jump-to-conclusions head. Thanks.

Well, with the serious clout of the shipping companies that rely on it regularly, it could be a blessing that they could throw their weight behind not prematurely closing it down to access.

The MUPs on top of the levees are actually a benefit to the drainage district. They allow good reliable maintenance access as well as access for flood fighting activities.

This is a good point, and also how maintenance funding for some MUPs is secured. From what I’ve seen, though, many times a MUP is created by applying a relatively thin layer of asphalt to an existing dirt access road. The net result is that while they may have saved money in the short term, several levee-top MUPs that I know of are splitting apart with erosion and require patching over time. (One example I use often is the San Tomas Acquino Creek Trail in San Jose, CA (http://santaclaraca.gov/Modules/ShowDocument.aspx?documentid=408)).

I’d be bummed if the path went away – it’s my favorite route home during the summer.

Portions of the road on Sauvie Island are built atop the levee. Would those also be impacted?

I really enjoy riding that path, and would hate to lose it. How can it possibly be a safety hazard? As Brad said above, there must be a bazillion levees with MUPs on top of them scattered around the country. USACE could end up with a big fight on their hands if they suddenly tried to close them all.

How about enacting measures to prevent climate change – and thus rising sea levels – instead of mandating better levees?

“Levee holds back flood of changes.” GET IT? It’s a WHALE of a headline! It’s unBEARable!

Thank you everyone!
That was Fozzy Bear!
For our next musical act ….

You’d think tress, at least would be beneficial, as the roots can anchor loose soil, and provide a network foundation to prevent erosion

I was thinking that, too, initially, but apparently roots create pathways for water to penetrate deeper into the levee (and possibly all the way through).