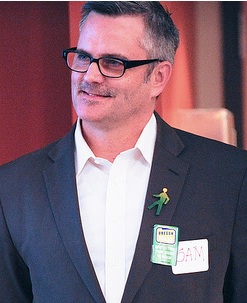 Former mayor Sam Adams hasn’t taken much of a vacation after his four tumultuous years leading the city. Today the City Club of Portland named Adams their new executive director. He starts next week.

If you feel (as I do) that Sam Adams understands (and cares about) the issue of transportation — and specifically the role bicycles should play in a healthy transportation network — than this should be seen as good news.

City Club of Portland is a non-profit, member-supported organization that works to promote civic literacy (their motto is, “Good citizens are the riches of the city”). Governors and members of Congress speak at their “Friday Forums” luncheons, which are held in a large ballroom of a stuffy downtown hotel. By way of their history and membership base, City Club has significant political heft and respect among electeds and policymakers. They use that respect to elevate and take positions on important issues through the publication of policy and research papers.

I probably don’t have to remind some of you how influential (for better or for worse) their report on Forest Park was in changing the tone and political dynamics around the bike access debate back in 2010. Now they’re actively working on a comprehensive study of bicycling in Portland that’s due out this spring.

Sam Adams was known as a wonk who loved to sweat the details, type long blog posts, and debate finer points of policy. Combine that with his knowledge of city power dynamics and it’s easy to see him having a big impact on the issues City Club puts resources into. For example, could Adams encourage City Club to delve into the topic of finding new transportation revenue streams?

“I’ll be most interested, though, in how Adams might approach the group’s policy research arm. Years as the city’s chief executive never dulled his love for white papers and wonkiness—a bad thing, for some people. And good, sharp reports will let both Adams and City Club make a lot of noise.”

This town needs more noise-making. And with Adams, City Club has just added swagger, energy, and a lot of transportation policy knowledge to their team. I don’t know about you, but I’ll be listening carefully.

wow. I didn’t see that one coming. I would say this is a good thing.

I was thinking the same thing. We ARE talking about Sam Adams, the former Mayor, right, and not some Republican guy from another state who got kicked out of Congress in the last election? That might make more sense.

Good luck, Sam. Mrs Dibbly & I have been wondering where you would land. This could be a tremendous opportunity.

Love it, congrats Sam! I think you have done a great job capturing the spirit of Portland and look forward to leading positive inquiry, research, and bold sentiments. SB

Here’s hoping that the next City Club study won’t start off asking:
‘Should cyclists have a fundamental right of access to all of the public right-of-way?’

Congrats, Sam. Thanks for your years of service. Looking forward to seeing what comes next for the city club.

Traditionally, the City Club’s executive director has not directed the policy discussions, or even the research topics at all. I don’t expect that will change, although Sam Adams will hopefully invigorate new ideas and broader policy discussions.