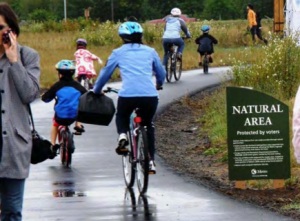 The Tonquin Trail — a 22 mile system of paths that will someday connect the cities of Sherwood, Tualatin and Wilsonville — is now officially named the Ice Age Tonquin Trail. The project has also just completed a master plan that is set to be forwarded onto city, regional, and county officials after a slate of public hearings early next year.

About 12,000 to 17,000 years ago, the same cataclysmic floods that started in Montana and created the Columbia River Gorge, also spilled into the Willamette Valley and left an a geologic imprint that remains today. The National Park Service has recognized the path of these floods and passed the Ice Age Floods National Geologic Trail into law in 2009.

One year ago, this project was awarded a $5 million federal grant to design and build a portion of the trail in Sherwood. Backers of the trail hope the name change will lead to even more cash. According to a resolution passed by the City of Tualatin back in August, adding the words “Ice Age” to the name of the Tonquin Trail is an attempt to tap into funding opportunities by tying the regional trail to the national trail.

Here are two excerpts from that resolution:

The National Geologic Trail will consist of a network of marked touring routes with interpretive opportunities distributed across this vast area and existing roadways will link many of the region’s superb geologic resources by way of a long, central pathway and designated loops and spurs, and where in places foot and bicycle trails that enable access and provide interpretive opportunities…”

In addition to the new name (and new funding opportunities it might bring with it), the master plan is a significant step forward for the project. It will serve as a roadmap for phasing the project and it will allow the various cities and counties the trail passes through to integrate the alignment into their local comprehensive plans. 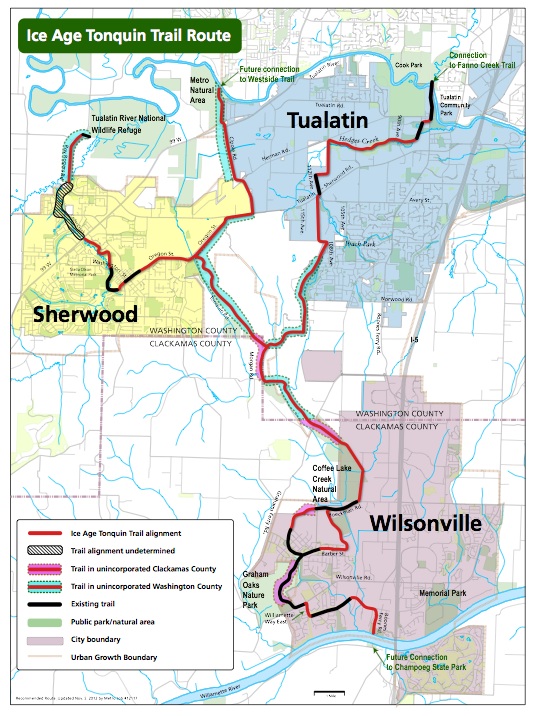 Several pieces of the trail have already been built, including: a 1.5 mile section through Metro’s Graham Oaks Nature Park and in the Villebois community in Wilsonville; a section through Stella Olsen Park in Sherwood and the Tualatin Community Park. The master plan calls for a Phase 1 build-out of another 1.5 miles in the City of Sherwood to be built by 2015.

This is interesting. Can anyone else recall a trail project being renamed just to make it more attractive to funders?

I am all for name changes if get’s funding for bike projects. Within reason, the “Taco Bell Tonquin Trail” is not what I mean. However, I could certainly stomach the Damascus to SE Powell “Ice Age Foster Road” if it gets us a safer and faster commute into inner PDX.

For a second there, I was expecting Sid.

How about the North Portland I love Trains Choo Choo Greenway?

Chris I
Reply to  Kiel Johnson

The stretch just south of Sherwood, where the hills meet the marsh is amazingly beautiful and has it’s own personality.

awesome I live in Wilsonville might be better then riding Hall Rd 🙂 to boones ferry. at this point it bigtime urban miles..