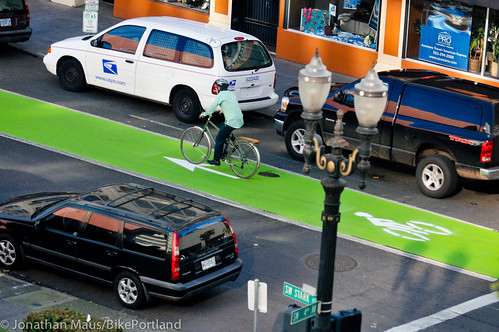 The green paint on SW Stark and Oak bike lanes is all in. It’s impressive; but it’s only paint. Will it actually work?
(Photo © J. Maus/BikePortland)

As I mentioned recently, the Bureau of Transportation has made good on a promise to improve the bike lanes on SW Stark and Oak streets downtown. After realizing that many people in cars were illegally driving in the buffered bike lanes, they decided to fill the entire lanes with a new bright green paint. Not only have they added the new paint, they’ve actually widened the bike lane, at least it seems like they have.

The old buffered lanes were unpainted and they provided six feet of bike lane alongside a a two-foot buffer zone. PBOT has now gone in and painted the entire lane — including the buffer — making the lane a solid eight feet wide. That’s the largest bike lane width in the entire city and it almost looks as wide as the standard lane next to it. 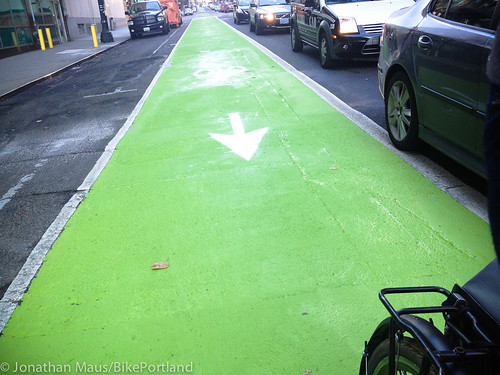 Visually it looks fantastic and I’ve felt good riding on the welcoming carpet of green. Even without any physical separation it provides a clear signal that the green lane is special and, increasingly, I think people are beginning to equate green lanes with bike lanes. Unfortunately, it looks like — at least in some spots — the illegal driving still happens. 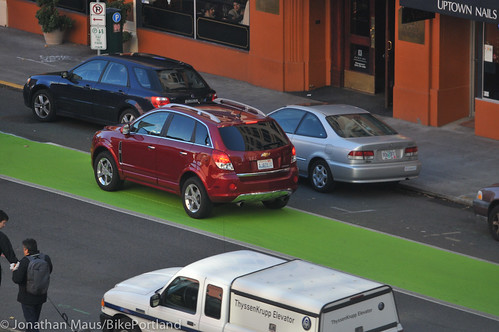 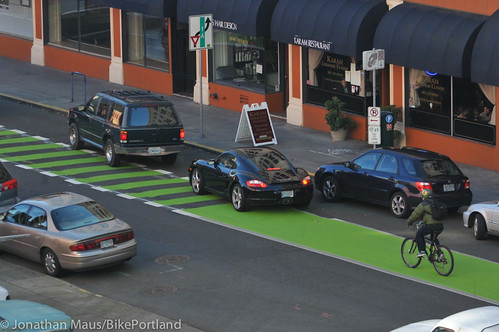 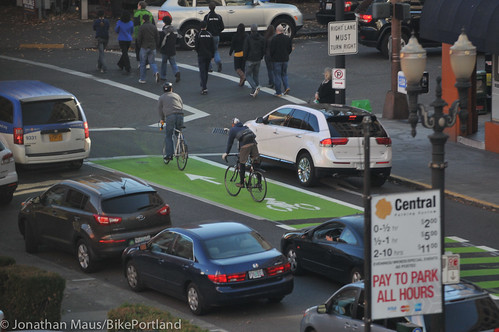 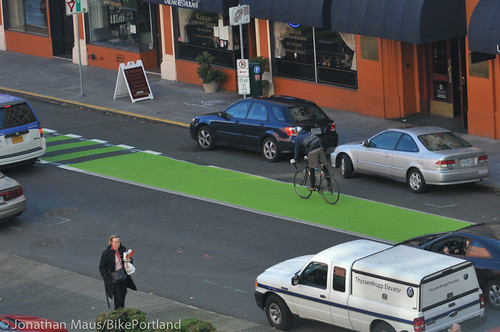 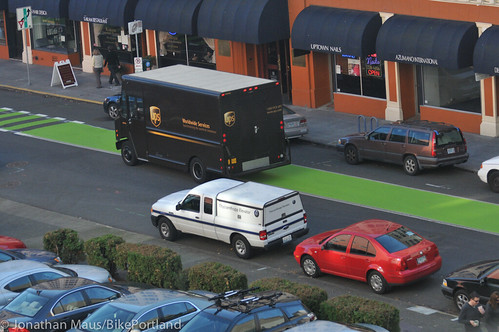 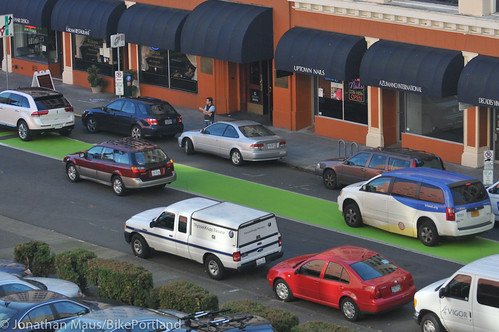 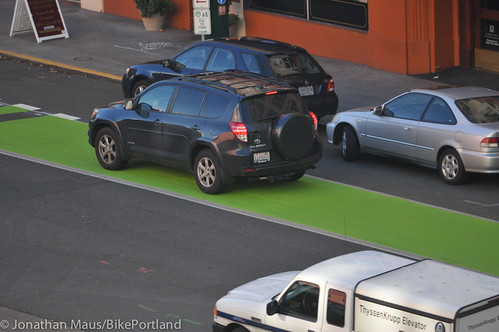 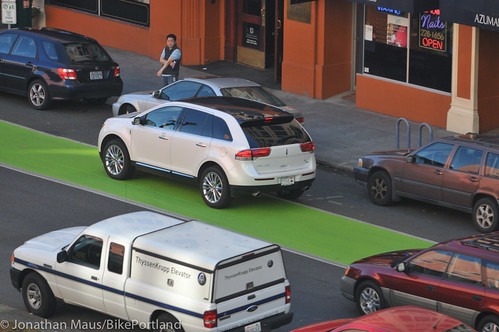 Now, I should add that my block (between 3rd and 4th) has a lot of people who turn right on 3rd. Most of the violators I see are intending to merge over the green to turn right and they are just doing so way before they should. I have a strong hunch (based on some observation too) that in other places without such high volumes of right-turns the compliance is much higher.

Overall, this new green paint is a huge and wonderful improvement; but I still think we could do better. I’d love to see more signage making it clear that the green is a bike-only lane and that driving upon it will result in a fine. I also think we should be doing more to experiment with protection of some form (perhaps raised reflectors of some type).

This project could be a very interesting test of the power of paint. Can simply making a bike lane extra-wide and filling it with bright green paint be enough to create the illusion of protection and separation that PBOT has been unable to build into our downtown bikeways?

How have these newly painted lanes been treating you?

UPDATE: I want to just re-iterate that I feel these lanes are working very well in almost every other section except for this heavy right-turning area outside my office. I realize these photos above — when taken by themselves — make it look like the lanes aren’t working. But that’s not the case.

UPDATE 2: I just published some additional thoughts and photos about how well these new lanes are working.

I particularly like the Trimet van toodling along in the bike lane.

We did see the picture and are reminding all of our LIFT operators not to drive in the bike lane.

Wow! Not a single vehicle in the lane! Looks like it’s working pretty well. {(ahem)}

Considering we are now in an era where the streets are being shared by a variety of modes of transportation it will be increasingly difficult to make everyone happy. That being said, we should be doing the best we can to compromise for the sake of everyone’s safety and this is a pretty good example of that.

I think this would have been perfect, if they had placed the parked car lane between the motor lane and bikelane. Taxis etc are still parking in the bikelane. One photo above even shows a frickin’ Trimet vehicle illegally parked in the bikelane, which means there is very little hope really, no?

Even so, the green paint is a phenomenal improvement on what came before imho.

I don’t think most of those vehicles are parked. If you look they have brake lights on, and it looks like they are moving preparing to turn right at the intersection.

I walk by this everyday (rarely bike it, oddly enough) and love staring down at block after block of green.

Car compliance is incredibly better than before. And I am very hesitant to pick on people swinging into the lane a bit early for that right turn. Frankly, it seems safer to do that a bit early rather than making a more dramatic cut right nearer the intersection. Kind of a reverse “taking the lane”!

looking at the first photo, I love the single leaf in the green paint! Solid paint is really poppin, but hows is braking…how about dots? Hav’t ridden it yet so dont know.

Is there any word on whether “experiments” like this are looked at on a wider level, say the State or Federal? My issue is that people out of town have no idea what this might be, or that we have 30 different implementations of bike infrastructure (See the Williams project for an example of this.)

There really needs to be universal implementation of stuff like this country-wide, to get the word and change patterns.

Our use of green paint has been inconsistent in the past, but we’re finally getting there. I like the “solid green= stay out” and “dashed green = merge” ideas.

Nationally, all big cities are using green paint for their bikeways in some form, but like us, their use has been inconsistent.

was carless
Reply to  NF

Yeah, the dashed green seems to read very clearly. Reminds me of a zebra-striped crosswalk.

Wonder how the paint will hold up. Think we really need to try using stained concrete for our downtown streets…

Yesterday afternoon as I was crossing Stark @ 9th I looked down and didn’t see a single car in the bike lane all the way down to front.

Of course, when I went out for lunch there would be a large moving van unloading office furniture in the bike lane on Oak.

I think the thing that bugs me is the lack of consistency here.

On SW Broadway, the cycletrack is protected by a row of parked cars and has green paint on parts of it.

The new new bikelane for a block on NW Marshall is protected by a row of parked cars, but has no green paint.

The new cycletrack on NE Multnomah is buffered by yellow (which is totally weird) with no green anywhere to show bikelane/cycletrack status.

If it is confusing to me as a car-free cyclist, I can only imagine what it must be like for the drivers of Clackistan as they careen around Portland in their humvees.

On the flip side, I’ve never had an actual car-on-bike conflict on either of these streets, even when I merge left into the ‘car’ lane to make a left turn. I’ve also never had a right-hook, which is a BIG DEAL.

By that measure, the lanes are highly successful.

I honestly prefer if drivers cut a bit sooner into the bike lane to make a right hand turn as it gives me a lot more notice it will happen. My biggest fear was someone not cutting in and making a wide, sweeping right hand turn.

As far as how it is treating me? So far, it does not seem to be a slick as I worried it may be which is good.

Still, I do feel a better alternative to this was sharrows instead of green paint. I said it in the last post about this. Green paint cannot keep a car out of a bike lane.

Hey folks, please read the follow-up story to this post that I just published. Thanks.