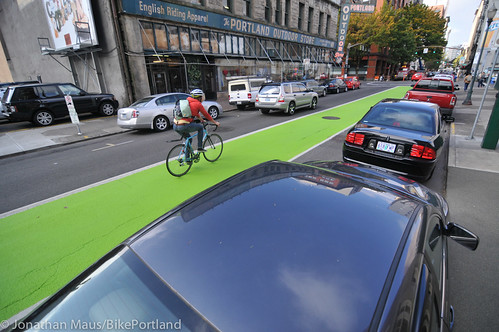 As promised earlier this month, the Portland Bureau of Transportation (PBOT) has begun applying green paint to the bike lanes on SW Stark and Oak. As of this morning, crews had painted three blocks of SW Oak Street from Naito Parkway to SW 3rd. 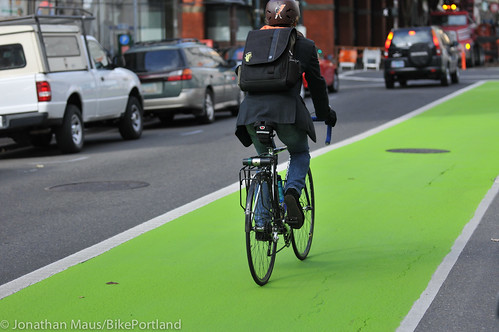 When the buffered bike lanes on these streets were installed back in 2009, they had only a few square feet of green paint at the start of each intersection. After it became clear to PBOT that people continued to drive in the lanes, they began to consider ways to beef up the visibility. The new plan is to completely blanket the lanes with green paint in hopes that it communicates to road users that the lane is for bicycle traffic only. 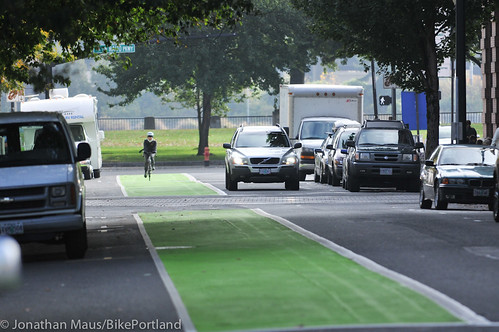 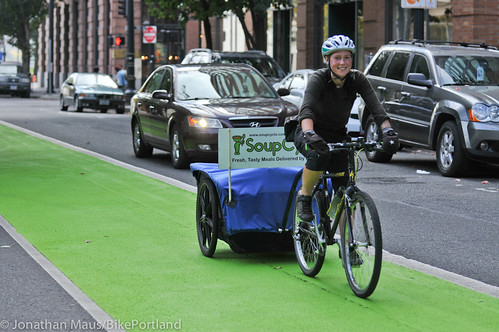 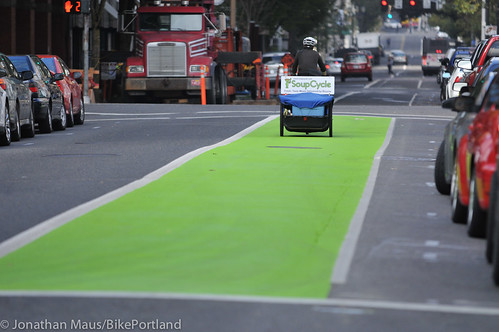 Note that there’s plenty of room for car doors to open. 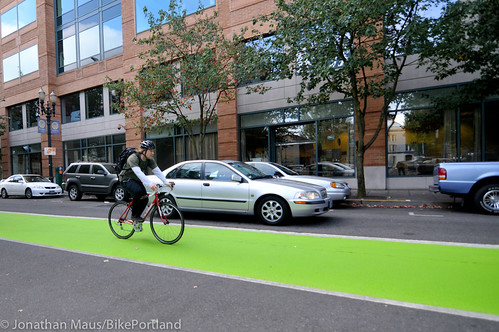 Of note with this project is that PBOT is debuting a brand new type of green material. In all past applications of green colored bike boxes and lanes, PBOT used large sheets of thick thermoplastic (similar to grip tape on a skateboard) that was laid down piece-by-piece and then melted onto the pavement with a torch.

According to PBOT, the new paint is called HOTLINE® Fast Dry Latex Traffic Marking Paint with a skid-resistant agent additive known as “Sharkgrip.” They bought it from Sherwin-Williams Co. for $16,697.20 (enough for 40,000 square feet of pavement). PBOT plans to use this same paint on the NE Multnomah project. 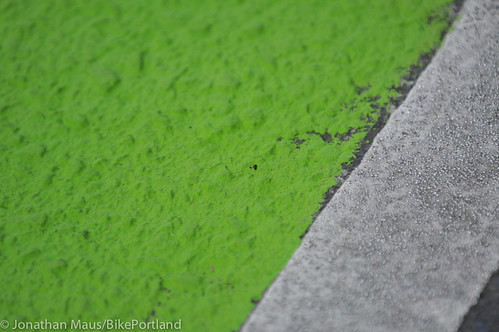 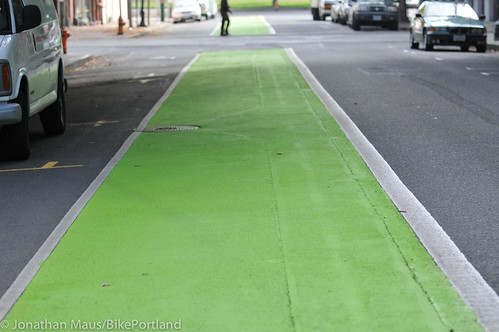 PBOT Bike Coordinator Roger Geller has been part of a national effort to find the ultimate green pavement material. Geller and PBOT staff researched the market for a paint that would offer skid-resistance, provide good color stability, could be applied by in-house staff and would be affordable (their top priority was skid-resistance). They found six types of paint and put each one through a battery of tests including: a “scuff test”, where testers dug their heels into the paint; the “bicycle push test” where bikes were slid across the pavement while holding the front brake; and a “ridden bicycle skid test” where testers approached each paint sample at speed and then applied their brakes once on the material. Geller also referred to guidance from the NACTO Urban Bikeway Design Guide and from colleagues around the country who are also experimenting with green markings. 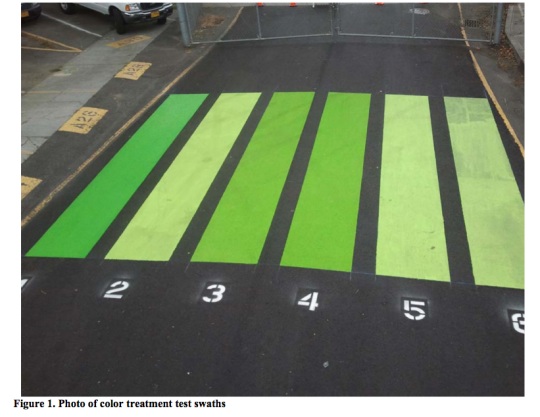 The result looked great during my brief observations this morning. The material is the right color, highly visible, and it has a rough texture that isn’t slippery.

During the 10-15 minutes I watched traffic, I didn’t see any blatant misuse of the bike lane by people in cars. The look and feel is also dramatically different than before (see before/after images below). Even without any physical separation, the bright green is impossible to miss. Yet, while it’s highly visible, the ultimate test will be whether people understand that green means the lane is only for bicycling (with exceptions for parking and turning movements).

Just to give you an idea of the before/after conditions on SW Oak. Below is the current condition of the bike lane… 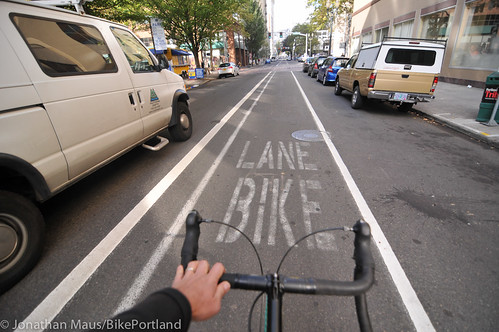 And here it is with the new paint… 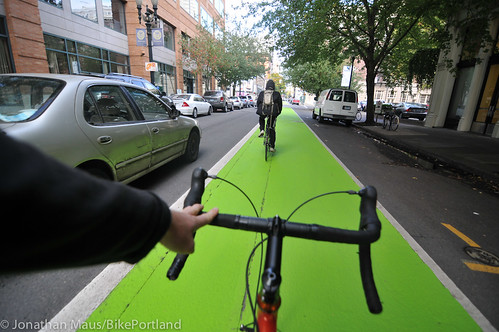 I’ll hold off judging it’s effectiveness until PBOT has completed the installation (yes, bicycle symbols will be added). But so far, my first impressions are very positive. Add in the fact that this paint is easier and cheaper for PBOT to install, and this could be an important step in the right direction.

This is great. I know a lot of people here will say that the money could be spent better in other places (Naito) or that these green lanes to nothing to actually protect cyclists.

But I remember coming to Portland a few years ago (before I was a commuter cyclist) and getting a strong feeling that the city actually cares about making the streets more friendly for cyclists. This is one of the main reasons I started leaving my car at home and riding my bike year-round.

The bottom line is that studies show that streets are safer for cyclists if more cyclists are on them and projects like this are inexpensive ways to get more people out there on their bikes.

Although I support the use of color to delineate bike lanes I think its unlikely that a green lane on Oak will inspire more cyclists to ride on a daily basis.

Hey, any sort-of-protected bike access in downtown is better than none….

Another PBOT painting project everybody might want to know about (sorry if this is old news, but I just saw it myself)…

Barbur Blvd is getting buffered bike lanes in the newly repaved sections (between SW Hooker and the Naito Parkway split). Called and confirmed w/PBOT’s striping and signing supervisor.

Oh man that is freaking awesome!!!

They need to paint the bus lanes at the transit mall too.

Better yet, eliminate cars from the transit mall. It’s a transit mall! Bikes can use the left lane for now, but I wouldn’t mind giving up that lane for more buses and trains, if the extra capacity is needed, or widening the sidewalks and adding more street furniture or shops (as long as we finally get separated north-south routes on parallel streets)

Did they drive 10,000 sets of studded tires across that paint to see how it would hold up?

Well, if you were going to test paint samples, really the most relevant test would be to drive cars over them repeatedly to see how many cycles, no pun intended, it can take before it wears off. Since that is going to happen.

Then for your selected paint,

Where
T = how long the paint will last (days)
C = the number you obtained in your test (cars)
V = traffic volume of the street (cars/day)
P = fraction of that volume who drive on the green paint (unitless, between 0 & 1)

Ultimately the only truly permanent (i.e. long-term cheapest) green pavement will be actual green pavement, i.e. where the pigment is mixed into the asphalt matrix, but of course that costs money up front, and America can’t stand that kind of thing.

Looks great! Thanks to PBOT’s outreach & installation teams for getting it done, in spite of some adverse weather.

I’m hoping the cold weather doesn’t effect the paint… I know they can’t do paving things when it’s cold, but not sure what the requirements are for this new paint to properly set up… we haven’t seen anything over 70° this week…

If the paint holds up to the wear of traffic, it should be used across busy intersections with greenways. Treat it like crosswalk paint for bikeways. It would make crossing intersections like Salmon/30th or Davis/60th A LOT easier I would suspect.

Assuming the studded tires don’t tear it off….

When are the Beavers fans going to throw a fit and declare that half of the bike lanes be painted orange?

Green is a PSU Viking color. OSU is free to paint their campus whatever color they want. 🙂

When they get an undefeated season or go to the Rose Bowl…yeah, like never!

This is great! Thankyou PBOT! Love it!

My only feedback regarding bikelane paint is that when it is dark out, regardless of how colorful it is in daylight, it is hard to see at night. I like the paint in bikelanes that has the glittery shards in it. I also liked something I saw once on the internet, that had little blue lights built into the roadway, that flashed to illuminate the bike lane to traffic.

Nice! I’d like it even better if they re-paint the “BIKE LANE” markings in it. (I still have some reservations about setting precedents & making motorists think that if a lane isn’t green then they can drive in it, though.)

Since these “bike lanes” are as wide as a regular lane, they need something special to make them stand out.

The best solution, which would need much less paint, would still be to move the parking to the left and the bike lane to the right, making a separated, parking-buffered bike lane.

Yes, but why is the bike lane BETWEEN traffic and parking?

Interesting how quick that went in. I go away for an offsite today (rode out to Edgefield today) instead of to the office and it finally goes in. Can’t wait to see it in person in the morning.

Whoops. Must be only at the eastern end. The western end does not yet have it.

They should paint the cycle track on Broadway in front of PSU green as well!

And if any video producers need a free chroma key background…

In downtown it makes more sense to share lanes because the car traffic is the same speed as bike traffic. I ride a lot and believe green lanes downtown do more harm than good, e.g. right hooks and being “doored”. PBOT, please remove and lets just be free to ride safely in the lane like any other vehicle.