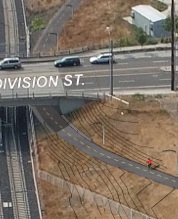 Detail of plans for
new undercrossing.

As we shared last week, the Oregon Department of Transportation is in the final stages of planning for a new undercrossing on the I-205 multi-use path where it crosses SE Division. ODOT staffers report a solid turnout at their open house on Tuesday night where they unveiled the design and asked for public comment.

In case you missed the open house, I just received the official rendering of the design. ODOT is showing two views of the undercrossing. 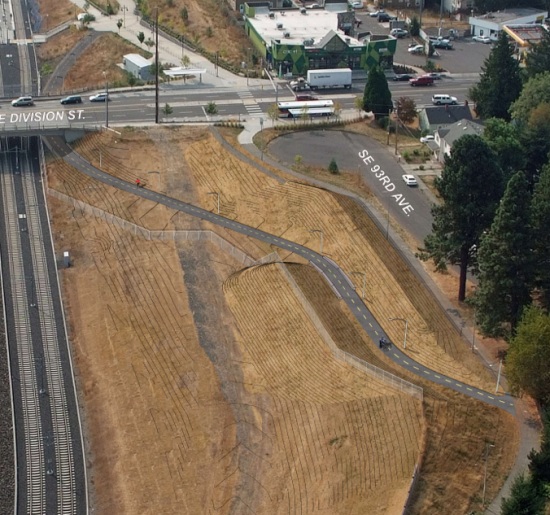 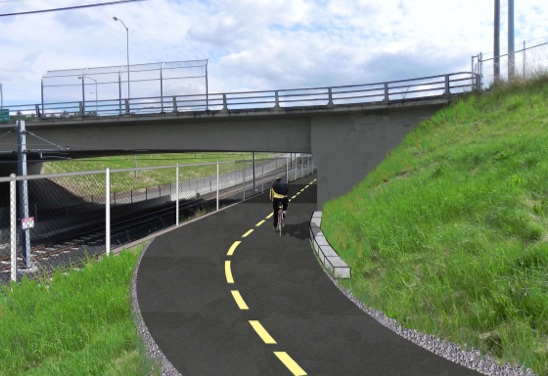 That sure beats the horrible 5-lane street crossing there now. Bikes will have to be careful though because they will be cutting across a lot of MAX pedestrian traffic at that station on the south side of Division.

This is nice because it is one of the busier street crossings on this stretch of the path, and it seems like 1/2 the time the lighted crosswalk signal does not work. Although cars usually stop anyway, once you start crossing very carefully.

This looks excellent! That’s always been a pretty nerve-wracking crossing.

I still don’t think crossing Division is that bad, but this is better.

I’m a little worried about the blind corner leading into the underpass. I can totally envision people hanging out on the path under the overpass, and cyclists coming through blind and plowing into them.

hmmm, I would like to see the cost-benefit analysis:
How many people use the 205 path, how much does that under path cost, how would the switch to a real traffic light cost?
Here is my (somewhat snarky) reasoning: I ride the 205 about twice weekly during the day and I don’t see that many riders. The riders I do see fall often under the category “Mamils” and -come-on guys- you have time to wait and interrupt your cadence there for a minute…
If there are many people during bike rush hour/at other time of the day, I do apologize, but my mind there are other places where we could use the money more effectively…

I usually ride it once a week in the evenings after rush hour and there isn’t much bike traffic… but is that because it’s not much fun for bikes so people avoid it? Division has been proven to be fatal for people on bikes so I would understand people wanting to avoid it… I see more people on weekends…

I’m all for cost effectiveness in these projects, but this seems like one that would certainly pass any reasonable such test. First, this project should not be all that expensive in the grand scheme of things, as it appears from the aerial view that the existing SE Division viaduct will not require substantial modification to handle a MUP. Second, the 205 path already gets pretty good useage, and cycling rates are almost certainly going to go up in the outer eastside as neighborhood populations change and as cycling continues to gain popularity in PDX. Third, Division is one of the tougher streets to cross on the 205 MUP owing to its many lanes of traffic and to the fact that the 205 southbound offramp is located only 50 or so meters to the east and dumps a steady flow of cars onto eastbound Division; this fix will make the MUP crossing of Division both safer and faster for cyclists and pedestrians. Finally, while the outer eastside is blessed with a decent number of east-west routes such as Burnside, Mill-Main-Market, and the Springwater Trail, it has only very poor north-south routes; fixing one of the more problematic–and easily correctable–sections of the best north-south route east of 82nd certainly seems like a good use of scarce resources.

On a separate note, my brief review of the area on Google maps led me to see that Google’s streetview feature apparently includes both the 205 MUP and the Springwater. Does anyone on BikePortland know anything about this? Is it new, or am I simply living under a rock? I assume that they used a bike, no?

I would have fixed a few other crossings first if it was my call, but one advantage here is that there is already an overpass for Division. Many of the worse intersections would have to build a bridge to bypass the road.

I’m no fan of the chaos between Burnside and Glisan, but those aren’t cheap fixes by any stretch of the imagination.

The Glisan crossing for the 205 path. Yeah…eeesh. Least favorite spot on the path. It would take more than counting all my fingers and toes to amount to the number of close-calls and/or alarmed fight-or-flight situations that have happened to me there. Typically from people coming off the freeway or getting on the freeway. Usually on their phone. Often in a massive SUV. I have an aversion to Escalades in particular.

It would be great if they built a by-pass of all the awful intersections from Stark to Glisan. It could come off the overpass at main on the eastern side of I 205 and then dive underneath all the cross streets coming back up north of Glisan. I was hoping they left room when the built the Green line but I doubt it.

Ah, okay. When you first mentioned the plan for an undercrossing, I pictured a new tunnel under Division near the existing alignment, without the detour. Which sounded ambitious, surprising and expensive. Silly me!

PDOT and ODOT are both crushing it today!!

I want that 26 path extended in both directions first!

It’s kind of sad that they couldn’t have designed a MUP/evacuation tunnel into that project. All you have to do is break through with a TBM and send it back the other direction. There would obviously be potential security problems, especially considering the length of the tunnel. They wouldn’t be the first to do it, though:
http://www.marinbike.org/Campaigns/Infrastructure/CalParkIndex.shtml

I do appreciate they are working on making that path safer, however I would have looked into improving the Stark/Washington area. I don’t know how many times I’ve almost been hit there. Actually just this last Monday, I ran into the side of a car when she went into the crosswalk before stopping. I was almost able to stop in time, but still ended up half on her hood.

Nice improvement…… I know this is not the worst intersection by far, but this new design is a great.

Come on folks quit complaining, we deserve fixes like this out on the eastside. We don’t get much bike love out here.

the blind corners and pedestrian conflicts shouldn’t be any worse than either Parkrose or Gateway. of course the elevation difference is up to cyclists to make up, as both the street and max tracks are level in this location. i don’t really expect city planners to do much more than just barely fit them into their plans anyway, so kudos to an improvement over a crossing on a major arterial!

Good good, one step closer to having a uniformly safe and speedy bicycle transportation system.

1) Couldn’t they have done this more easily and inexpensively when they put in MAX a couple years ago?
2) “ODOT also promises that the new path will offer… …good visibility/sight lines.” I’m not seeing the good sight lines. Undercrossings like this are notorious for inadequate sight lines, and it looks like this will be one of them. To get good sight lines, they need to continue the straight section of path (that’s under the bridge) at least 50′ on each side of the undercrossing. That way folks can ride it at-speed with confidence that if there’s an obstacle in their lane that they can make appropriate avoidance maneuvers in a comfy distance. Sight lines are given in the AASHTO Bicycle Handbook, which is endorsed by ODOT. I hope ODOT follows and exceeds the standards.

Thanks ODOT. solid fix to a lousy crossing. It’s terrible crossing on the street due to the light at 92nd and people racing for the freeway entrance. I had a number of close calls, even with a trimet bus, when I worked over that way.