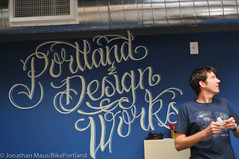 After just four years in business, Portland Design Works has made a solid name for itself in the bike industry. It was September 2008 when we first shared that a young, former general manager at Planet Bike, Erik Olson, was leaving Wisconsin to start up a new company here in Portland. Olson came here specifically to allow his endeavor to feed off our rich and vibrant bike culture. A few months later he joined forces with fellow Planet Bike co-worker Dan Powell. And the rest, as they say, is history.

From their headquarters just off the busy bikeway of N. Williams Ave, Portland Design Works has built a distinctive brand on a shoestring marketing budget. They’ve done it by doing creative projects (Circulus anyone?), by becoming part of the community, and of course by designing some very cool, distinctive and functional products.

Earlier this month I spent some time with Powell, Olson, and Sales Manager Kevin Murphy to chat about how business is going and to get a peek at their latest offerings.

It’s a hectic time of year for the PDW crew. They were not only prepping for the big Interbike trade show in Las Vegas when I stopped in, they were also getting ready for the time change and the early darkness that comes with it. PDW boasts a wide variety of products — from tools to tire inflation devices — but they might be best known for their lights. Their Danger Zone rear LED (MSRP $37) sells so well they can hardly keep up with demand.

Strong light sales have allowed Olson and Powell to extend their product range. Next month they’ll launch the Dios Thronos, their first saddle. “It’s like Crocs,” Powell said as I picked one up and squished it with my fingers. The narrow profile Thronos is one solid piece of EVA foam (in red, black, or white) crafted with what they say is just the right density. It’s also completely waterproof and scuff-resistant. Powell says at just under $40, a lot of people will want to swap out their stock saddle for the Dios Thronos. 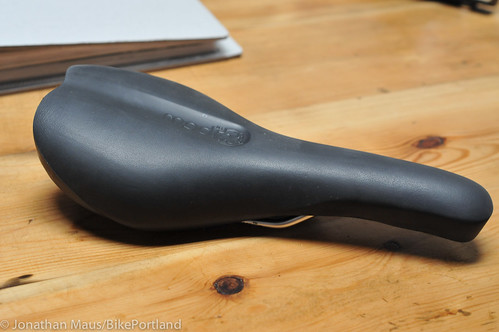 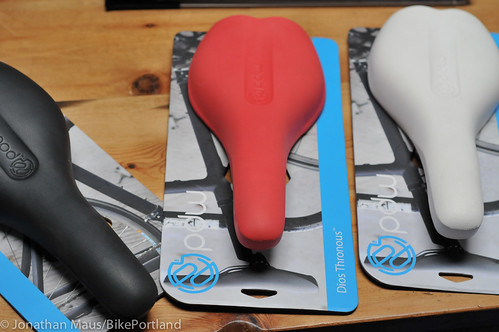 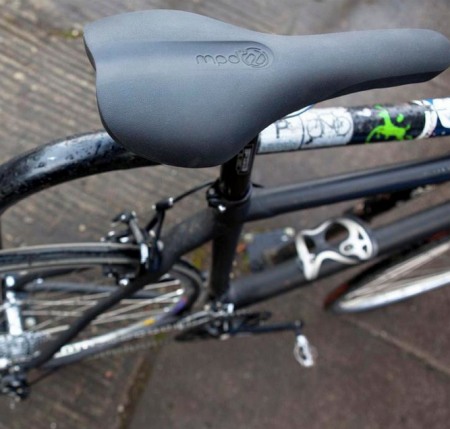 While lights might pay the bills, PDW is fast-becoming a leader in fenders.

The other product they were excited to show me were their Full Metal Fenders, PDW’s first-ever, full-coverage metal fenders. These things have some nifty features that make them much easier to install than some other metal fenders on the market; like a cut-out under the fork for tight tire clearances, a special bracket for fitting around road brake calipers, and even handy little eyelets you can attach to the axle if your fork doesn’t have them. Look for these to retail around $120 and be in shops by mid-October. 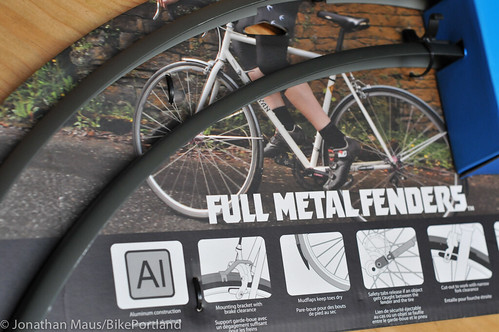 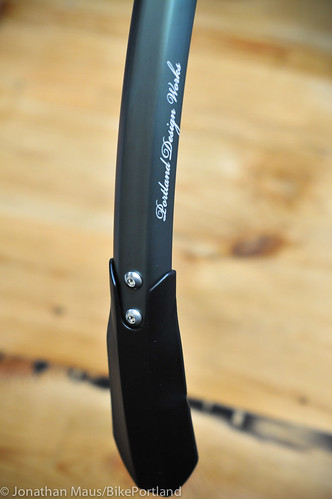 Another new fender from PDW are the “Dave Gray” fat bike-specific fenders. If you haven’t heard, fat bikes are a fast-growing niche in the bike industry. With tires nearly 4-inches wide, the bikes can go anywhere — snow, sand, mud, or whatever you can throw at them. Olson said he realized fat bikes were a full-fledged movement after attending the “Frostbike” trade show in Minnesota in February. Their Dave Gray model pays homage to the man who designed the bike that started it all, the Surly Pugsley. Gray helped PDW with the design and lent his signature to the fender itself. Olson says he was honored that Surly put them on their Pugsley at Interbike. As for sales, they sold 600 units in the first month (at $20 for the front, $28 for the rear) and it looks to be another winner for PDW. 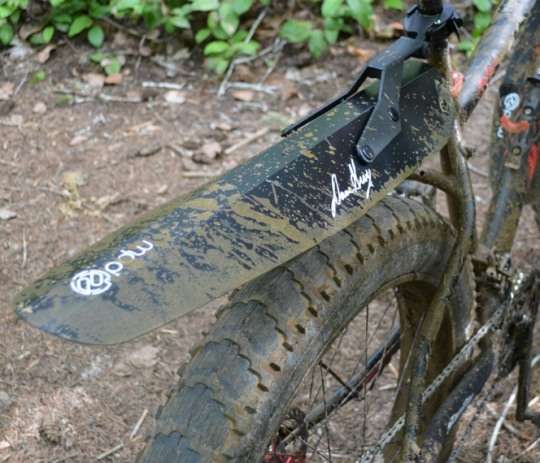 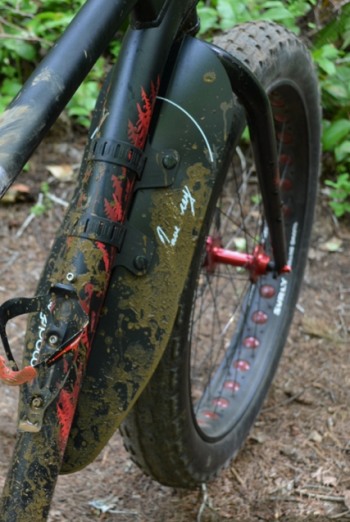 Rounding out their fender line, PDW now has an all-aluminum Xcalibur model. It’s a clamp-on style fender that replaces their Machete model. 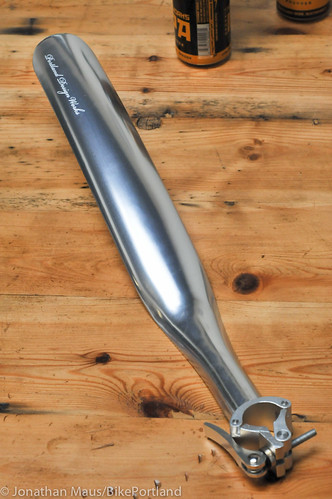 As you might have noticed with their Mach Schnell Goggles and other products in their “What Have You” category, PDW likes to keep things interesting. Along those lines is their new Bird Cage, a water bottle cage stamped out of a single piece of aluminum that takes on the shape of a swallow. Available next February-March for around $20 a piece, Powell says the Bird Cage is an attempt to have fun with what’s usually a mundane part of a bike. 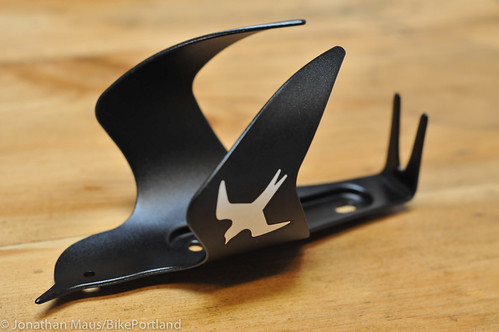 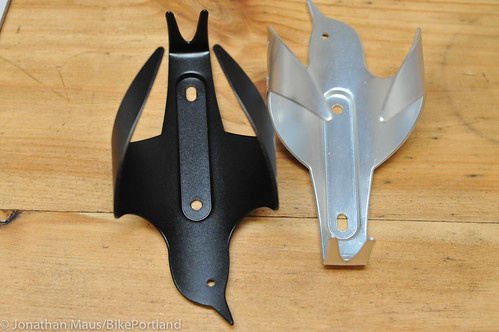 Far from easing into the bike industry, these products make it clear that PDW is pushing their way in and making a name for themselves. They’re finding a sweet spot by offering shops a high-quality product at a good price, without all the commitments and strings that are attached to carrying the larger brands. They are also a favorite with the type of smaller, independent bike shops that dot Portland’s streets. “The small shops are who give us the opportunity,” says Powell, “They’re quicker to embrace us.”

While they appeal to small shops, they’ve also made inroads into some of the nation’s largest bike retailers. Powell estimates their products are carried by about 1,000 around the country (out of about 3,000 total).

It’s only been four years, but Sales Manager Kevin Murphy (who’s been at the company for two years) knows PDW isn’t a new kid on the block any more. “When I call shops, they know me now… When I say I’m with Portland Design Works, they pay attention… it wasn’t like that before.” But while their brand is solid and they’re on solid footing for a young company, PDW is far from an industry juggernaut. “We haven’t arrived yet,” says Murphy, “But we’re a hell of a lot closer.”

They totally put a bird on it.

I noticed a local frame builder’s bike was used on the full metal fenders cardboard backer. Is there some sort of influence by local builders. For instance the logo on the water bottle cage.

Unless he’s in on it, kinda seems like PDW is squashing on Ira Ryan’s badge.

I really like the Speed Metal grips I got from them. Really nice color choices.

Cool fender options – I hope the new Full Metal Fender eyelet accessory has a nutted option for my Lemond Fillmore and other track style bikes. 😉

And another fender dream I have been having… is finding a full metal fender upgrade for my “all weather” Brompton. The current fenders are good but not great for winter use.

I have a stainless steel pint cup from them… awesome.. thanks, rad

How do their lights fare in comparisons with others? Anyone have a link to a good review/comparison?

After having one of PDWs first generation lights for 3 years that worked perfectly after numerous drops, crashes, and three years of rain I went ahead and bought a Dangerzone for every bike that I own. Good product, they support the community, and great folks overall. There really is no reason for a Portlander (or anyone) to purchase a light from one of their competitors.

There is a pretty comprehensive light review here: http://bicycles.blogoverflow.com/2012/03/tail-light-review/

dan,
thanks so much for that link. Exactly what I was looking for.

Got the PDW Spaceship, a Dangerzone and a Bar-ista on my bike. The mount for the Spaceship totally kicks the PB Beamer light mount’s arse (thumbscrews work a lot better than levers).

From 11 years experience now of riding mountain bikes here in Portland in the mud, I gotta say that the type of fenders above (clamp on style) for off road riding (like in FP from December through May) don’t do sh*t.

The rear fender has to be full coverage; go all the way past the seat stays to some where the seat tube meets with the chain stays the backs of your legs will be fully coated with mud.

For the front, it’s got to extend in front of the crown as well as in back or you’re going to be a getting a face full of spray the whole ride.

Sorry for sounding like a know-it-all here, I’m sure these fenders would work in a little bit of mud, but not in the NW…go for a two hour ride in the winter in Forest Park with these fenders and you’ll see what I’m talking about.

It would be fantastic if these guys could design a good full coverage mountain bike fender (that works with front and rear suspension). I really think there would be a market for it.

I’m thinking if you”re kicking up that much mud you’re probably ruining the trail.

For a singletrack trail I would agree with you. But I’m talking about the legal off road areas in FP…Leif Erickson, Holman uphill, forest lanes, Newton Rd, BPA. They’re so shoddy already that riding on them when it’s muddy is not going to ruin them.

Well, you don’t sound like a know-it-all, because these fenders aren’t for mountain biking, clearly. So why judge a road bike fender with mountain bike fender standards? Foolish.

Dangerzone is my angel

Love my RadBots! Several people have said they’ve never seen taillights so bright and asked where I got them.

swallows have short bills, seems like it’d look more like a penguin hugging your beverage if you stand it up.

How does the price for their metal fenders compare to the rest of what’s out there? $120 seems crazy expensive to me though maybe I’ve just not seen what else is on the market now.

Still using PB SuperFlash taillights. I like being able to go several weeks between battery changes/charges. Some of the PDW lights are super bright, but (1) are we pushing the limit of how bright a blinky should get? and (2) the batteries only last a few hours, so in my case I’d be recharging them every week or two.

Most of the nicer lights these days have built in USB charging, so it’s easy to plug in to your PC while at work to get a charge:

Enjoyed a NiteRider MiNewt headlight until it was lifted, just ordered the Lumina 650 which has a number of improvements. USB chargeability is super convenient! Haven’t switched to USB taillights though, hard to justify $30 vs $200 for the amount of power the taillight drains versus a headlight. That’ll change I’m sure.

The Hotshot’s just under $40, so it’s competitively priced.