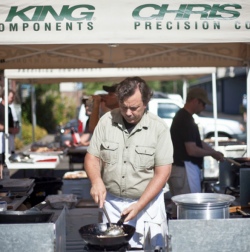 Similar to the “coffee bike arms race” and the well-known links between beer and bikes here in Portland, now there’s a growing bike connection to our vaunted food scene as well. And Chris King, the man behind Chris King Precision Components and Cielo Cycles, is the hub that connects many of its spokes.

Back in February, we showcased the Ned Ludd Market Bike, a collaboration between local bike builder Ira Ryan (Ira Ryan Cycles) and chef/restauranteur Jeremy French. The bike and its trailer are a fitting and functional complement to what French refers to as his “American craft kitchen.” And Ryan refers to French as the, “foodie equivalent of handmade bike builders.”

The Ned Ludd Market Bike got a lot of attention and it made French a natural fit for a starring role in Portland’s overlap of fine food and bikes — an overlap that also comes naturally for Chris King.

One of my earliest memories of working for Chris back in the 1990s was prepping sandwiches for a trail maintenance event in Santa Barbara (where he started the company in the 1970s). He had blackened dozens of red peppers and a crew of us had to strip away the charred bits by hand. Chris has been a gourmet for a long time, so it was no surprise when he took over the Gourmet Century from a chef in California in 1999 (the company moved to Portland in 2003). The ride has continued through the years; but it really seems to have bumped up another level this past year.

In July, 300 people took part in the event. Instead of simply cooking great food during a bike ride, King brought in several of Portland’s most well-known chefs from like John Gorham from Toro Bravo, David Padberg from Park Kitchen, Chris Diminno from Clyde Common, Jason French from Ned Ludd, and of course Robert McSpadden from the Chris King Kitchen (the company’s in-house restaurant for employees).

By all accounts the Gourmet Century was a big success. Portland filmmaker James Wilson captured all the flavor in this fantastic video:

And Chris King isn’t quite full yet, so this weekend he’s got another tasty bike ride planned. In conjunction with Feast Portland, Chris King Precision Components will host the first ever Chris King Cielo Salon Ride.

Here’s more on this Sunday’s ride:

We’ll meet at Heart Coffee for Wille Yli-Louma’s critically acclaimed coffee and Grand Central Bakery pastries, then head out on a 50-mile ride around the picturesque Sauvie Island before spinning back for brunch at Chris King HQ prepared by the chefs on the ride. For the bike enthusiasts, King himself will provide a “golden ticket” tour of his fabled factory. For those too weary from the festivities or otherwise disinclined to straddle a bike, come cheer on the cyclists as they return and grab a seat for brunch and a pint from Double Mountain Brewing.”

There seems to be a shared love of craft between those who enjoy making and eating a good meal and those who enjoy a good bike ride. But beyond the craft, perhaps the bike/food connection is strong because food is doubly appreciated when it literally fuels one’s passion for riding.

— For more on Chris King’s love of food, read this excellent profile on him that ran in The Oregonian’s Mix Magazine a few years ago.

but hey, we can’t make a difference in everything, so bicycles are a good start…

word. i bike for many of the same reasons i don’t east animals or their products.

I hope you are joking about the pictures of meat keeping you away. Sadly I have found many vegans as bad as religious fundimentalists when it comes to tolerance of other lifestyles so maybe you are serious. It looks like they have veggie options for their events.

Jon
Sadly I have found many vegans as bad as religious fundimentalists when it comes to tolerance of other lifestyles so maybe you are serious.
Recommended 2

You call it “tolerance of other lifestyles”, but if it were a chunk of some animal you don’t eat, like a dog or cat, you’d think it was disgusting.

I’m with Spiffy, that Web page is a turnoff.

I saw headless dogs for sale in the markets of Vietnam – not that weird really – I heard it tastes like wet dog smells, so trying it was kinda low on my priority list… meat is meat really.

according to william buehler seabrook human flesh is quite tasty:

“‘It was so nearly like good, fully developed veal that I think no person with a palate of ordinary, normal sensitiveness could distinguish it from veal.”

With my previous comment I’d give human a try – meat is meat, though probably not a good long term strategy to eat your own kind – mad human disease.

its also bad for you, bad for the environment, and a luxury. no human being *NEEDS* to eat animal flesh.

sorry – correction needed is located in the second paragraph.