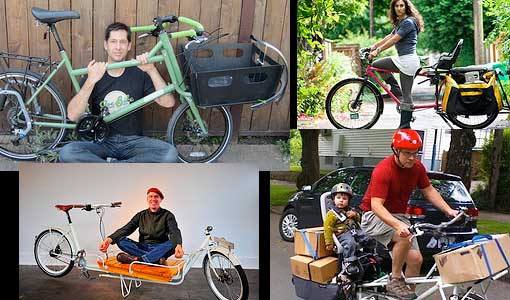 A few of the competitors signed up for the Disaster Relief Trials on Sunday.

On Sunday (Father’s Day!) there’s a Pedalpalooza event I’m really looking forward to: the Disaster Relief Trials (DRT). It’s been remarkable to watch how the event has gone from an idea among Portland’s thriving ecosystem of cargo bike enthusiasts to a full-blown event with great partnerships, sponsors, debuts of new products from Yuba and Xtracycle, and plenty of fun to look forward to. 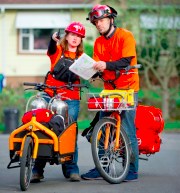 I mentioned this event briefly back in March when I shared the idea that cargo bikes could play a major role in disaster response. It’s well worth taking a closer look at what’s planned.

First, check out how organizers set the scene:

“In this Pedalpalooza event scenario, the Cascadia subduction zone fell, resulting in a 9.1 earthquake that spread quickly through the region, resulting in Portland area destruction and a tsunami that hammered the Oregon coast and felt as far as Japan.

It is day 4, your Neighborhood Emergency Team (NET) just heard on the HAM radio that recovery supplies have been palleted and are ready for pick up, but obstacles exist. The transportation infrastructure is compromised and fuel is rationed or not accessible.

When this tragic event hits Portland, it will destroy a good deal of the city. However, because of preparation and organization, Portland will be ready with a powerful team for disaster relief, bringing with them supplies, food, medicine, communications, and support. Filling in the gaps between city and government aid, will be relief teams that will arrive by cargo bike.”

And did I mention there will just happen to be a bunch of zombies running around?

30 people (six women, 24 men, learn more about them here) have already pre-registered to ride in the event. They’ll tackle a 30 mile course full of challenges and they’ll have to do it with a 100 pound payload of “vital emergency supplies”. Local HAM radio volunteers will be spread at checkpoints throughout the course to relay progress back to the start/finish are a at Velo Cult bike shop in Hollywood.

And of course the event is “100% child friendly” because cargo bikes and kids go together beautifully (not to mention many of the competitors first became interested in cargo bikes after toting around little ones). Families will be able to test-ride lots of different cargo bikes and get advice and tips on car replacement strategies.

The event is sponsored by Splendid Cycles, Joe Bike, Metrofiets, Xtracycle (who will debut their new SideCar), Skedco (rescue equipment), and Yuba (who will unveil their new Boda Boda model!). 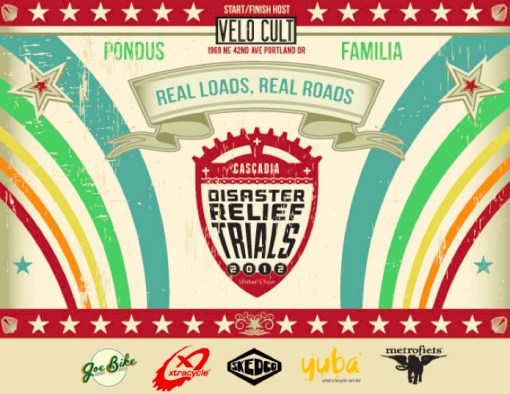 Which combination of human power and cargo bike configuration will save the world? How can bicycles play a key role in disaster response? Come to the Disaster Relief Trials on Sunday to find out.

30 riders: two classes of 15 each
Xtracycle will also showcase their new Side Car

This is going to be a hoot. The organizers have really outdone themselves pulling this event together. From all I can tell this is not going to be your run-of-the-mill ride.

I wish i was there to participate. Looking forward to seeing all the great coverage that BikePortland will provide.

Oh crap, we’re being chased by zombies too? This is going to be great.

And you better believe that in Portland, Zombies can still ride hard.

I’m going to have to add some zombie defense to my emergency kit. I’ll be riding hard, but not so fast.

So THAT’S why a guy riding a cargo bike blew past me on the springwater this morning. Must have been practicing. He was going at a pretty good clip too.

Ham is not an acronym and is not all caps. But it seems like the organizers made that mistake too.

Travis A. WITTWER
Reply to  Aaron

Aaron, thanks for the lesson. In serveral printed sources and online groups, it appears as HAM. Tell me more about why some groups do capitalize all and other do not. What’s the background for why it head a capital H? (PS, nice use of “acronym” rather than misplacing it on an “initialize.”)

Aaron
Reply to  Travis A. WITTWER

Who knows why some folks capitalize all of it. It’s generally not even written with initial caps. It is believed to have come from a pejorative term used by professional landline telegraph operators for amateur radio operators. Like you would call a crappy amateur actor a “ham.”

Not a lot of landline telegraph operators these days. 🙂

Travis A. WITTWER
Reply to  Aaron

That deserves a Scooby snack!

How about spectating suggestions? Can peeps follow along? Are the obstacles and checkpoints secret? Please lets us know…

Travis A. WITTWER
Reply to  oskarbaanks

oskarbaanks, ideally the riders will be the only ones using the Checkpoints.

oskarbaanks
Reply to  Travis A. WITTWER

That I certainly understand. My inquiry was really more to the point of,if people wanted to spectate on some level, how would the event organizers prefer them to do so. Have a great time!

Google: disaster•relief•trials•map
There are (7) Checkpoints listed on the map as triangular exclamation symbols. They will be visited in order, forming a counter-clockwise loop of 30 miles or more.

A little non-intrusive ride-along is OK

This better happen annually!!! I’m missing it this year! 🙁

I hope this gets national TV news coverage so I can see it here in the suburbs of Hell, in TX.

Antload
Reply to  Opus the Poet

Check out Oregon Public Broadcasting, KOPB, Monday, June 18, 4:45pm on your Internet portal….then *probably* NPR Tuesday or the weekend. Then…look for the release of the documentary by Joe Biel of Cantankerous Titles. Thanks for your enthusiasm!

Opus the Poet
Reply to  Antload

I hope that will also come out as a podcast, my ANCIENT computer is lacking a sound card. It was a monster in its day, but that day was a decade ago.

Builder By Bike will be there!

Well that was very impressive all around!
Real roads, real loads, and lots of leg muscles. I vote for adding a full size sheet of plywood and an adult invalid to the cargo next time. If you increase the load to 250 lbs., it will also be slower 🙂