Election night a big one for Bike Walk Vote PAC 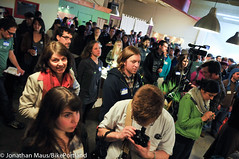 After being founded in 2004, then lying dormant for several years following the 2008 elections, Bike Walk Vote came roaring back last winter. Boasting some seriously smart and plugged-in new leaders (Evan Manvel, Peter Welte, Mike O’ Leary just to name a few), they threw a highly successful launch party in December. When the likes of U.S. Congressman Earl Blumenauer and a packed crowd showed up, it was a clear sign that Portland’s huge population of low-car advocates were just waiting to organize and make their voices heard.

With the votes counted from the May 15th primary, candidates supported by Bike Walk Vote did extremely well. In fact, five of the seven candidates they endorsed won outright and the remaining two — Jefferson Smith for mayor and Mary Nolan for City Council — finished very close seconds and will sail into runoffs in November. 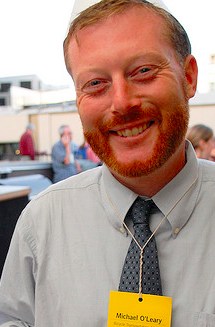 So, how did this scrappy, all-volunteer organization manage to choose so wisely and help push these campaigns to victory? From what I can tell, it was equal parts political savvy, passion, and hard work. In a message to supporters, Bike Walk Vote volunteer Mike O’Leary, shared a few more specifics.

At that party back in December, they began to poll members and supporters about their priorities. The results went into building their candidate quesionnaire’s, which served as the backbone of their endorsement decisions. (If you’re curious, opposition to the Columbia River Crossing project and promoting equity in transportation planning/funding polled at the top.)

For the next four months, they collected and reviewed all the candidate responses, conducted face-to-face interviews, and researched each candidate’s public record. For their mayoral endorsement, Bike Walk Vote volunteers even did ride-along interviews with each of the top three candidates.

Once the election heated up, Bike Walk Vote’s work really began. They gave over 2,000 hours of time, raised and spent $8,600 for their chosen candidates, and approached over 4,000 biking, walking, and transit-centric voters with endorsement pamphlets.

The biggest success story for all this work is probably Jefferson Smith. Not only did Smith come from way behind in the mayoral race to finish just four percentage points behind Charlie Hales, but a centerpiece of his campaign turned out to be his clear opposition to the CRC project.

Bike Walk Vote’s work is far from over. They’ll continue to work hard for their candidates and more events and actions are planned.

“But right now,” says O’Leary, “we’re gonna’ turn off our phones, enjoy a nice bike ride and then go take a nap in the shade.”

— Find out more at BikeWalkVote.org and get involved via their Facebook page.

Nice work, all around.
It is probably also worth noting that Smith got ~9% of eligible voter’s votes, and Hales ~11%.

Low voter turnout means those who do vote have their votes count more.

It will be interesting to see how the results differ this coming November, given that it will also be a presidential election, I’d expect turnout to reach its normal 4-year peak.

Guest
U can still register to vote for the November election

If older folks and more conservative folks vote in EVERY election, and younger and more progressive folks only vote in the “BIG” ones, it seems like Jefferson Smith is looking to make a big jump in the next election.

I know used their endorsements for a handful of candidates I wasn’t sure about. The questionnaires they used were so well thought out!

The bike PAC in San Francisco has several hundred PAC members vote to ensure that insider politics in the bike community have limited weight in elections.

In Portland we have 9 insiders on a PAC endorsing insiders.

Ask Evan to ditch the steering committee and take simple steps towards a democratic PAC.

Great work! I am hoping CRC opposition becomes a bigger issue this fall. It is a terrible idea that should be stopped.

We really owe a huge thanks to all of the members of the community who shared both time and money to make this what it was. We couldn’t have done it without the hundreds of people who came to our events and the many dedicated volunteers who did amazing work. Did I mention that we had volunteers out for a 4 AM for a lit drop? That dedication from the active transportation community just blows me away.

I’m looking forward to some laid back BBQs and parties over the summer before things really kick back into high gear for November.