“Only 28% of bike theft victims knew their bike’s serial number- making it harder for police to identify the bike if recovered.”
— From PPB Bike Theft Analysis

The Portland Police Bureau’s Crime Analysis Unit has just given us the first look at a new report on bike theft. According to the PPB’s statistics, the number of reported bike thefts has increased sharply this year, more Treks were stolen than any other brand last year, the most commonly stolen bikes are worth about $500, and the major bike theft hotspots are downtown.

The report reveals that 2,214 incidents of bike theft were reported in 2011. That is a large increase over previous years. The Portland Mercury reported in 2010 that, between May 2008 and February 2010, there were only 2,300 stolen bikes reported. PPB spokesman Pete Simpson says he believes the higher number is a reflection of both more thefts and more people actually reporting them (thanks in large part to the PPB’s new online crime reporting tool which launched in early 2010).

The 2011 analysis shows that the main bike theft hotspots are at the University of Portland, the Interstate Ave area, the Broadway area, and in southeast Portland. Check out the hotspot map below: 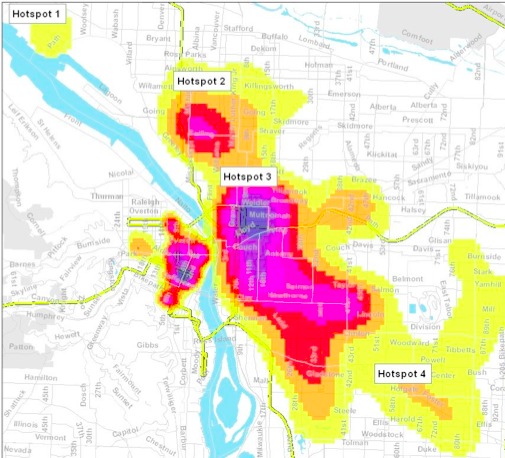 Downtown is by far the place where most bikes are stolen. “Only a few spots in the downtown area account for 26% of all bicycle thefts citywide,” says the report. Interestingly, there seems to be no difference in the amount of bikes stolen on the weekends versus weekdays. Given the large number of people biking to work during the week, this is surprising. The PPB says the reason could be due to, “an increase in recreational riders” on the weekends and that, “People may leave their bikes parked over night or in one particular area longer since they are not required to be at work at a particular time.”

What brand of bike is stolen most often? PPB data says that title goes to Trek (of course, there are probably more Treks sold overall too). They also presented a breakdown of stole bike values and found that $500 rigs are the most commonly taken: 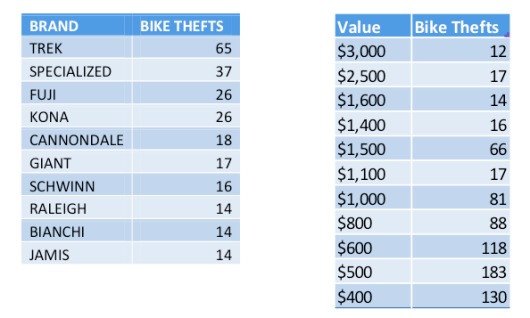 While the PPB’s online crime reporting tool is becoming more popular, I think it’s still clear that more bikes are being stolen in Portland (another factor is that more people are biking in Portland each year). Here’s a chart the PPB gave me that compares the number of bike thefts reported from January 1 through February 25th for the last three years (and breaks it down between reports received via dispatch and the online reporting tool): 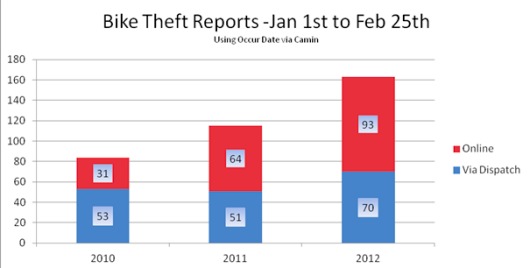 The BikePortland Stolen Bike Listings are another sign that bike theft is spiking this year. In that same time period we had 43 bikes listed in 2011 and that number ballooned to 93 this year.

While these numbers and trends are a concern, a silver lining is how active the PPB has been on the bike theft issue. I know many of you have stories about losing your bike and not being happy with the response you’ve gotten from police, but over the past six years or so that I’ve been around this issue, I think they’re doing a great job. They have helped recover stolen bikes and they have worked with BikePortland and others on education campaigns. Pete Simpson says they intend to continue to help decrease bike theft. He says they released this report as a service to the public, “recognizing that it’s an important part of the Portland culture.” A public awareness campaign from the PPB about bike theft might also be forthcoming.

To help prevent your bike from being stolen, the PPB recommends the following (in their words, not mine):

If you have a smartphone, it takes only a few minutes to photo your serial number, frame, components and acessories, and upload them to a site such as flickr, picasa, etc. where you can access the information anywhere your phone or a computer can. (versus having the serial number siting at home in a file or trying to memorize it)

Yes, this is exactly it. Just email yourself the photos and description of your bike and components. Then you have a permanent record as well with a timestamp as proof, and you can forward the email on if needed. gmail is great for this.

When it comes to theft and citizens, cops only “find” your items if they bumble into your items accidentally. Other than that, you have to find said item and get the cops to confirm that it is yours. That’s the only reason to file a report. The paper trail.

Scott is correct. With anything stolen in general, your best bet is to be proactive in preemptive documentation, (as Esther suggested) and to do your own leg work ASAP. In the past three years in Portland I have helped 5 people recover their bike within 2 weeks, and helped another guy retrieve a construction trailer that was his life’s blood. All of the items were advertised on CL, 2/3 posted in Bend, Eugene, Washougal etc. as a front. The police were only of assistance once inroads for clues were established by us first. true fact.

It’s not the only reason – just the only reason which benefits the victim directly. Reports are also compiled into the crime statistics – if a crime isn’t reported, effectively it doesn’t exist as far as the city or law enforcement are concerned. Lots of crimes go unreported and can hide developing problems until they become entrenched.

As a follow up to this article – it would be interesting to compare this to the number and hot spots for car theft. Are there more bikes stolen in Portland’s core?

Portland Monthly does a thing on the neighborhoods every year, and looks like Downtown is up there for motor vechicle theft, but mostly occurs in East Portland.

82nd Avenue is one of the big car hot spots, mostly due to the large number of car lots.

The table above shows bikes at $500 the largest bin. But the total # of bikes in that table is only 742. How does this number compare to the 2,214 total for 2011 reported above? If the difference represents bikes <$500 that would be very interesting. If the total is reflective of a different year, or a partial year that too would be interesting.

Finally, how are the $-values determined? If the police asked me to name the value of my (stolen) bike I'd have no clue except to reference Craigslist for comparables ($150). But if I were hoping for insurance coverage I'd be tempted to say $600 since it's replacement value (new) would be at least that much, probably twice that.

My tip for serial numbers…
Using a black or silver Sharpie pen (depending on frame color), paint the serial number, then photograph it, and put it somewhere that you won’t lose it (I decided on flickr.com).

I keep the serial # as private to me only (except when the bike has been destroyed).

Look at the lone hot spot on Willamette! What a drag to come out of class at U.P. to find your bike gone!

I rode through campus last weekend. To my dismay, (I’m an alumnus), I saw numerous bikes placed in racks with only a light cable and cheap lock, or no lock at all. When my friend (another alumnus) and I parked our bikes outside of the bookstore, we used a chain, a cable lock, a U lock, and a frame mounted ring lock to secure our two bikes to the staple rack. Overkill? Maybe. Or, maybe not. Both bikes were still there upon our return.

I’ve been a lot more careful after having a bike stolen a few years ago. For me the way to go, especially if I’m in what I perceive as a “hotspot”, is to Sheldon-lock the rear wheel to a secure rack (using a mini U-lock) and run a cable around the front wheel.

Question: does it do any good at all to sign up with National Bike Registry? Other than forcing me to record my serial numbers, that is? Do the Portland Police actually check with NBR when they recover stolen bikes so they can get them back to their owners?

I think I have heard on here before that the PPB doesn’t use NBR to aid in recovery, but of course that is now 3rd to 4th generation information. I would also like to hear from someone within the bureau.

If you bought your bicycle (new or used) at a reputable shop, they should have records on the bike you bought, S/N, color, etc. If you can’t find it on your original receipt, try giving your bike shop a call!

“Only 28% of bike theft victims knew their bike’s serial number- making it harder for police to identify the bike if recovered.”

GPS tracking for you bike is coming: http://signup.biketrak.com/

So where would one go to speak to someone about a possible theft group I’ve witnessed? I’ve ridden by a home in SE numerous times and seen a group of rather “rough” gentlemen loading arm loads of bike tires and other bike parts into a covered truck? For the life of me, I can’t come up with a good reason as to why someone would have such a volume of bike parts…legally.

I do know a guy in SE that owns a shop and has a ridiculous amount of bikes stored at his house.

From a geographic analysis perspective, this report only tells part of the story.

As they state in the report: “The Downtown area has the most thefts potentially due to a higher population density or more bike commuters.” This is likely true, and it would be useful to derive the probability of one’s bike being stolen if locked up in downtown. If you were to normalize the rate of theft with pop, or better yet, the number of parked bikes, you might be surprised to find that locking up in downtown is relatively safe and has a lower rate of theft than other parts of town (per capita).

To clarify, I am not saying downtown IS any safer, and it could be very well the “least safe”. My point is this analysis doesn’t prove where the risk of bike theft is highest.

Whoa Jeff, in most cities, especially Portland, there are groups of rather rough people doing community bike-shop projects or just making crazy bikes for there circus or something. Those types probably aren’t stealing that stuff.