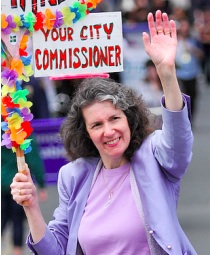 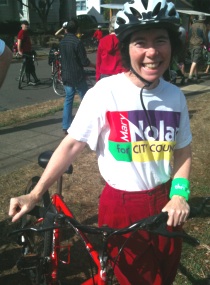 Local non-profit Upstream Public Health is hosting an “informal conversation” with Portland City Council Candidates tonight and the topic on the table will be active transportation. Upstream and other orgs that are sponsoring this event (including 1000 Friends of Oregon, the Bicycle Transportation Alliance, Coalition for a Livable Future, OPAL, Ride Connection, and the Willamette Pedestrian Coalition) are the same folks that brought you the excellent mayoral debate back in February.

Tonight’s event will be a bit more low-key than the mayoral debate; but the City Council races — especially given Portland’s “weak mayor” form of government where all five commissioners have an equal vote — are just as important.

The tightest race will be between Mary Nolan and incumbent Amanda Fritz. I look forward to sharing more coverage on both of them in the coming days and weeks. The other race (for outgoing commissioner Randy Leonard’s seat) is thought to be a shoe-in for Steve Novick; but there are some interesting candidates in that race. Both Jeri Williams and Mark White have important perspectives to add to the conversation.
(Novick isn’t expected to attend tonight, but the other four will be there.)

To prep for the event tonight, check out how each candidate responded to questions about active transportation issues written up by Upstream, the BTA and other groups.

Someone please ask Amanda if bicyclists are behaving well enough now to get $$ for lifesaving infrastructure.

Well she should have seen so for herself. She was filming something on the Springwater trail on Monday morning, impeding bike traffic while she was doing it.

I called Fritz for help in resolving the traffic conditions that have lead to the numerous accidents around my home on Willamette Blvd. got some interest, but little else. Maybe Mary will be more effective. My experience.

Anybody but Amanda Fritz…

Quick clarification, these are the exact same questions we wrote as a coalition for the mayoral debate.

Interesting “opinion piece in The O. If the list of endorsements for Nolan is correct there are plenty of obvious questions to ask her.
http://www.oregonlive.com/opinion/index.ssf/2012/04/generous_backers_dwarf_communi.html

Your source is Dave Lister. All the more reason to support Nolan.