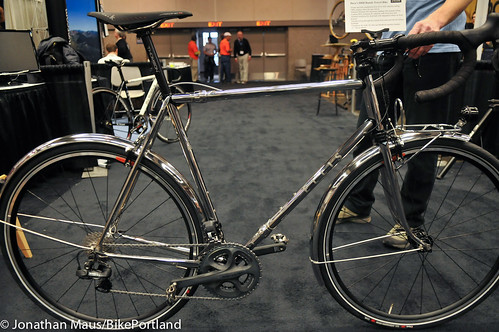 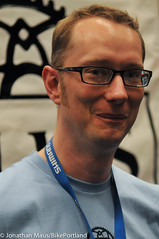 Wages says he’s noticed an uptick in people asking him to build rando bikes so he decided he should make one for himself (and ride it), in order to learn more about them. One of the many things that set this bike apart is its use of Shimano’s Dura-Ace Di2 electronic shifting component group. Rando is a discipline steeped in tradition, but Wages makes no excuses for his use of the high-tech grouppo. “So many of the randonneuring bike builders seem to be lost in time.” Wages points out that the old constructeur era of French frame builders that set the aesthetic for today’s randonneuring bikes were innovators known for creating new parts and pushing the boundaries of form and function.

“If Rene Herse and those other builders were still making bikes today, they’d be using Di2,” says Wages, “I want to stake my claim to the modern rando bike.” 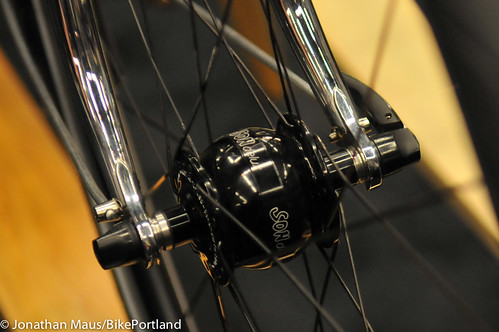 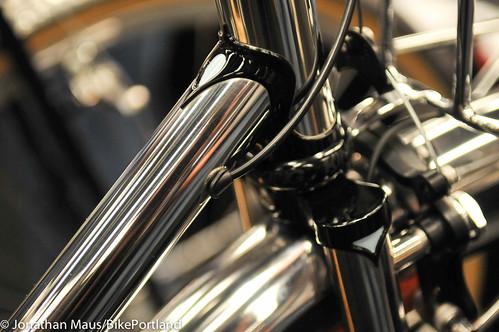 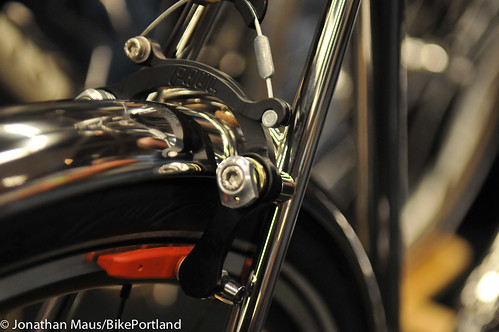 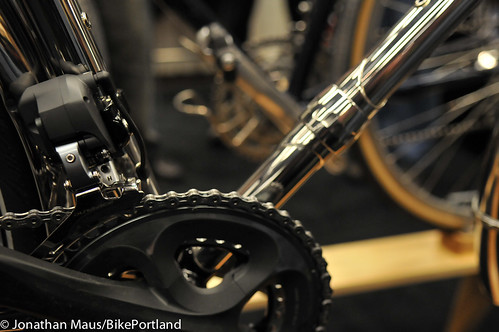 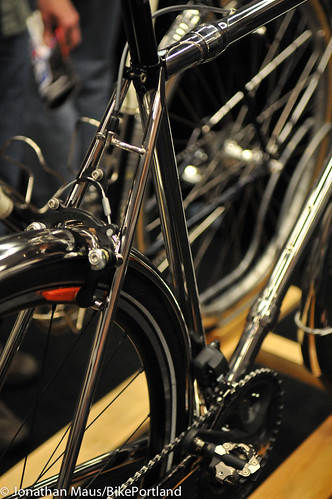 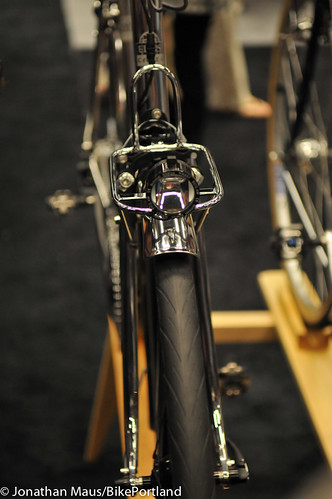 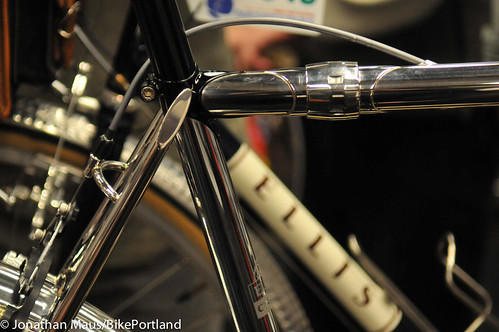 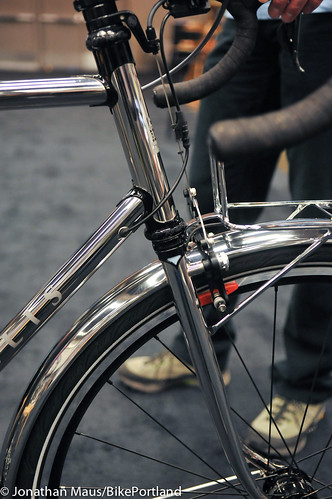 Other highlights of Wages’ bike include S & S Couplers (so it can break down for travel), a SonDelux SL front hub with integrated contact point that is pressed into the fork dropout, internal wiring throughout, KVA MS2 stainless steel tubing, and much more. Total weight of this bike is just 23.1 pounds.

I won’t be surprised if Wages takes home another prize this year.

UPDATE: This bike has been awarded “Best Steel Bike.” Read more about the awards here.

it’s herse. and the name is still alive and making bikes. http://www.renehersebicycles.com/ and yes, the old rando builders were very innovative, however i highly doubt they’d be using di2, as using “state of the art” from the largest component company in the world isn’t very innovative. building your own components and beating the major companies to it, is another thing. however, i still don’t see the benefit to adding more batteries to bikes. maybe if you can power it along with your lights from the hub generator, then we can talk.

thanks for catching that. i checked over my notes again and it’s quite possible I mis-quoted Mr. Wages. I had a gap in my notes and I think he was talking about the old constructeur builders in general. He mentioned Herse but my notes don’t connect Herse to the “alive today” bit. I apologize for the error.

oh no worries, i was just pointing that out. i also don’t want to be too negative towards mr. wages. it looks like a really nice bike. i just don’t like his disparaging tone towards other rando builders, who while the styling is often very “classic”, are still quite modern, especially when it comes to lighting. not too many builders are still using sidewall generators or battery lights (although i’m sure they are out there), they have also taken very quickly to led lights and hub generators, even though the herse and singers from the 50s never featured those. and i don’t like his idea of innovation, which is just slapping the most expensive components on a nice bike. i’m sure it’s a great bike and i’d be happy to test ride it a bit, but it’s not my idea of innovation.

Phil, I’ll admit, it’s probably presumptuous on my part to imagine what Herse or Singer would have spec’ed on their bikes, they were known for being the early adopters of derailleurs and other “cutting edge” technology of the day. At the same time, I take exception to the idea that I slapped the most expensive components on my bike without spending quite a bit of time testing them and making an informed decision. I used parts on this bike from small boutique companies like Paul’s and Schmidt, along with the high tech gearing from Shimano, but each part was chosen for the best possible function and performance. Every rando bike I build is a one of a kind, and I’ve certainly built a share of more “classic” styled ones, but this is my personal choice for my own bike.

You can call or write to find out what Singer specs on their current rando bikes, which are as superb as always.

Fair enough Dave. I suppose I should watch my phrasing as well. Once again, it looks like a great great bike, I’m just not sure about the innovative part.

middle of the road guy
Reply to  phil

A fully electronic shifting system is not innovative? What would be then – one that is thought controlled?

Apple is one of the largest players out there, would you argue that as a result of their size nothing they do is innovative, either?

As someone mentioned earlier I have doubts about an electronic shifting system on a rando bike, because the battery power must run out eventually, and where are you then? Or do the batteries last a really long time?

Jon Webb
As someone mentioned earlier I have doubts about an electronic shifting system on a rando bike, because the battery power must run out eventually, and where are you then? Or do the batteries last a really long time?
Recommended 0

Typical battery life is 3-4 months, depending on how much use/shifting the system is getting. Most folks report only having to recharge the battery once or twice a season. It’s definitely not like a cell phone battery.

In the same vein, I’m thinking that it might not be too hard to come up with a way for the front dyno hub power the Di2, and then you could just drop the battery entirely. There’s still some work to do on that idea, but stay tuned.

For anyone who’s interested, I’ve posted a blog about this bike, and a link to photos of the rebuild process out of the S&S case. I think if folks take the time, you’ll see there are some really well thought out details on this bike. Innovative or not, you be the judge? http://blog.elliscycles.com/2012/03/reassembling-my-s-nahbs-rando.html