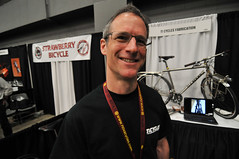 Next week the focus of bikes lovers around the globe will turn to Sacramento, host city for this year’s eighth annual North American Handmade Bicycle Show. Portland-based builders have always made a a big impression at NAHBS (pronounced “nabs”), and this year will be no different.

18 Oregon companies plan to exhibit and 11 of them will form a special, made-in-Oregon section. The Portland-based Oregon Bicycle Constructor’s Association (OBCA), an industry group with members throughout the state, has collaborated with show organizers on the special section. Eric Estlund with Winter Bicycles in Eugene, is Vice President of the OBCA.

“Oregon builders are amongst the best in the world,” says Estlund, “and NAHBS is a great venue to promote them.”

OBCA’s goal at NAHBS is to help their members get in front of a large national audience. The show is the largest of its kind, and for many builders it’s the only major marketing effort they’ll make all year. Estlund says putting all the Oregon builders together helped reduce booth fees, and more importantly, he says, “It helps us promote Oregon as the place to look for a diverse selection of fantastic bicycles made by a wide selection of talented builders.”

Here’s the list of OBCA members that will be at NAHBS:

For a sneak peek at several local builders before they pack up and head to Sacramento, stop by the “Show Me Yours” preview event this Friday evening at the Ace Hotel Cleaners on SW Stark and 10th.

NAHBS will be held March 2-4th at the Sacramento Convention Center. Stay tuned for coverage from the show (I’m headed down for it and I’m excited to have new contributor Ryan King joining me!). Learn more at HandmadeBicycleShow.com.