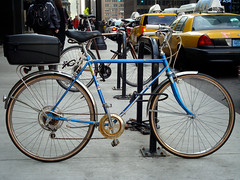 – Have you seen the “Magnic Light” over on Kickstarter? It looks to us like it could revolutionize the bike lighting world. It’s a wireless dynamo that’s super bright. Check it out.

– Tea Party members are pushing hard to eliminate federal funding for public transit and bike facilities under the notion that transportation projects are part of a plot by the United Nations to “herd citizens toward cities.”

– 87-year-old retired Oregon State professor Bill Brown died from his injuries last week after a woman driving a car struck him as he rode his recumbent trike on January 9th.

– This new GPS bike theft tracker looks very promising because it conceals itself in the headtube.

– The fight over Project Park West is heating back up after anti-bicycle-lane group Neighbors for Better Bike Lanes appealed a ruling which threw out a challenge to the wildly popular cycle track.

– A man in Bristol, U.K. was been jailed for using a motor vehicle “as a weapon” to attack another man on a bicycle.

– Centenarian Robert Marchand set the first-ever track record for his age group. Marchand said he didn’t set out on his track bike to create the record but instead “just wanted to do something for [his] 100th birthday.”

– Green bike lanes will be disappearing from a Los Angeles street after it was discovered the pavement markings interfere with the filming of car commercials and other location shoots.

– One mother in Arkansas faces a year in prison and a $1,000 fine for forcing her son to walk to school after the child was suspended from riding the bus.

-The Bay Area Air Quality Management District issued a Request for Proposal for a bike sharing pilot program to be launched on July 1st.

– School Board members in Imperial Beach, California voted 3-2 to maintain their current policy of labeling biking to school as a “dangerous activity.”

– New Zealand Cycle Classic Tour director Jorge Sandoval feels riding without a helmet in New Zealand is not a “sensible option” adding, “I only wear helmets because all drivers here are idiots.”

– A rapid transit line in the Philippines lifted its ban on folding bicycles after citizens advocated for the change.

– Employers in downtown San Francisco may soon be required to provide bike parking for their employees.

– Protesters are planning a “human chain” to block the first installment of the World Naked Bike Ride in Tauranga, New Zealand.

– Residents of Savannah, Georgia are seeing the benefits of a “road diet” after the first of six projects to create neighborhood bike lanes was completed on Price Street.

– Officials in Bordeaux released a concept for a new combination scooter and bicycle.

– Bicycling magazine released the results of their reader survey which found 50% of men and 58% of women would rather give up sex than cycling.

– And finally, there’s a new book coming out from Bike Snob NYC. Check out the hilarious promo video below:


Did you find something interesting that should be in next week’s Monday Roundup? Drop us a line. For more great links from around the web, follow us on Twitter @BikePortland.

Thanks Will & Jonathan! This is my favorite part of bikeportland.
But…’allowing her son to walk to school’ -> that is not what the article you linked to says; quite the opposite.

You’re right – “allowing” is too soft of a word. I’ve updated the text to explain how the mother “forced” her son to walk after he was suspended from the bus.

forced to walk 4.6 miles in 30 degree weather! When police said they were taking him home he begged them not to because he said his mom would beat him!

This isn’t really an anti-walking story.

I was reading other coverage of that story and it seems like the “beating” comment could have been hyperbole on the boy’s part.

Here’s what he (the boy) later said:

“She did the right thing,” Nequavion said. “She knew that I had been suspended off the bus five days, so she didn’t do nothing wrong. She made me walk. I just had to walk. They shouldn’t have picked me up. I could’ve walked by myself.”

Concerning the Arkansas woman, I think “allowing” in your link title may be a bit different that the “teaching of a lesson” as described in the story itself. A 4.6 mile walk in sub-freezing temperatures is a little over the top, then again so is the threat of a year in jail.

How can a group be called “Neighbors For Better Bike Lanes”, when they are completely anti-bike lane?

“The fight over Project Park West”…

That should Prospect Park West.

Thanks for the catch!

I find it crazy that if weathermen can do all kinds of crazy stuff with green screens, that ad makers are b****ing about green thermoplastic in the bike lane.

I’m certain that the fix (digitally) would be cheaper than grinding away the markings.

they used to use blue-screen as their color of choice and then switched to green many years ago… it’s up to technology to accommodate, not for us to change our needed social infrastructure for the gain of capitalism…

The Bill Brown item contains a link to a Corvallis Gazette times article which in turn contains a link to an earlier article with more information about the original collision. Apparently he was crossing Grant Avenue in Corvallis (25 mph) and thought he had room with an approaching car “three or four blocks” away. The driver’s car clipped the right rear tire of his recumbent trike. He succumbed to pneumonia that developed in the hospital.
From the earlier article, “No citations were issued because police said there was no clear-cut determination of fault.”
We’re a small town here. That intersection is on my daughter’s newspaper delivery route. I have taken fifth graders through there in bicycle education classes.

If Hollywood and car companies are worried that bike lanes promote more cycling, maybe they’ll be pleased to read the NZ report that proves pushing helmets prevents people from riding.

I think the NZ “research study” could be easily disproved by looking at the overall numbers of cyclists. If you look at the way they state those statistics, a perfect explanation could be that There are more cyclists in the later timeframe skewing their statistics. If cyclist numbers are up, it makes sense that there would be more accidents. If cyclist numbers are up it would make sense that the Average distance per rider (that’s a weird stat) would go down, as people that are newer to cycling are more likely to ride shorter distances.

Reading that Bicycling Magazine readers survey was a bit of a surprise. I had no idea it catered to a kind of rider I almost never encounter on Portland streets. It was all about energy bars and hill climbs and shaved legs.

Congrats Savannah. Welcome to the family. Though the reporter added an ominous point at the end of the article:

“This will also be Savannah’s first bike lane taking bicyclists out of downtown.”

…Will this create an escape route for cyclists to flee to the suburbs, as all past generations have done when they have kids and look for schools and secure indoor [bike] parking? 😉

On the walking-to-school thing, this is Arkansas, and even worse, it’s Jonesboro. Very strong Tea Party presence up there, and this is the place where the elementary school kids got mad and came back to school with hunting rifles several years ago, killing teachers and fellow students like snipers. The place isn’t very bike friendly at all, but we’ve got a small movement going up there.