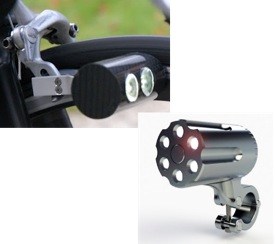 The “Magnic,” (L) and the Gotham Bicycle Defense light.

In a place like Portland where darkness covers commutes for several months a year, two projects currently seeking funding via Kickstarter — a theft-resistant bike light and a wireless dynamo light — are well worth your consideration.

I shudder to think how much money I’ve lost in stolen bike lights over the years. That’s why the new anti-theft light from Gotham Bicycle Defense (love that name) caught my eye. The light locks onto your bars and its designers say “no tool from a hardware store can remove it.” It’s also waterproof, and it’s shaped like a revolver for good measure. Watch the video below and you won’t be surprised that this project has already gone way over it’s funding goal…

And then, perhaps an even more exciting bike light breakthrough, is the “Magnic” light from Germany. Hub-dynamo powered lights are becoming standard issue on serious city bikes these days, but they require a wire from the light into the dynamo. Not only are wires a nuisance, but dynamo hubs are heavy and they don’t roll as freely as standard hubs.

The tech geniuses behind the Magnic Light have figured out a way to use the movement of the spinning wheel to power a crazy-bright beam. Watch the video below to see for yourself how cool this is.

It will be interesting to see if either of these products ends up being widely available and/or to see if major bike light manufacturers like Planet Bike license the technology.

I like the look of the wheel light, and would love to try it. I’ll leave the Gotham for you Jonathan…

I’ll take issue with your comments on hub dynamos. Mine roll quite freely, does not ever need maintenance, and I fully expect them to outlive me (SON28 and SONDelux). Never going back to anything else.

Not bad for the $50 pledge. No clear statement about the light’s illumination mode options, but does offer run time specs for ‘steady’, and ‘flashing’, so it apparently has at least two modes.

There do still seem to be a lot of lights on the market using disposable AA and AAA batteries…which probably can be switched out for rechargeables. I prefer lights that allow the battery to stay in the light for charging, rechargeable with a USB plug in or wall charger. This feature is becoming quite common.

I don’t know if I could have much confidence in the light’s claimed anti-theft mount. Thieves will probably ignore the lights because others are easier to steal, but it wouldn’t be too hard to get a hold of one of the tools. I prefer mounts that allow the light to be removed easily, so I can take it with me if I did have to leave it out somewhere.

i really doubt either of these lighting systems make economic sense. i can buy a 100 lumen usb rechargeable tail light and a 100 lumen battery operated head light for ~$55 online.

Despite what I wrote earlier today, I tend to agree that for a little more money, better value can be had. I got the hotshot for $31. Works well enough. Last year, I got a Cygolite Pace 150 lumen for $80. This year an 180 lumen model has been selling for $70. Both usb rechargeable.

It’s nice to help out the little guy though. The Gotham Bicycle Defense light website had good pics of the light. Besides ‘floody’, it didn’t have much info on the beam the light puts out. Not too sure about the effectiveness of the 6 LED design. A single emitter with a lens to focus the emitters beam seems to be the prevalent design approach, and more recently…efforts to deploy the emitters beam indirectly, allowing the light beam a rectangular shape that confines more of the illumination to the road instead of in people’s eyes in a road or MUP situation…are being marketed by some manufacturers.

And yeah, I’m also not big on the light mimicking the shape of a cylinder from a 6 shooter firearm.

Thanks for the great post, I’d like to see more posts like this in the future. In the meantime I just threw down a little bit of money for one of those Magnic lights, and I hope a few others here join me.

Can I take the Magnic Light to the next rave I go to?

Is anyone else thinking that the revolver design is the very reason they would *not* ever buy that light? I guess they have plenty of fans, based on their Kickstarter funding, but this strikes me as another example of how male-dominated cycling is.

(Yes, some women like guns and many men don’t, I know. But how many women would want to ride around with something pretending to be a gun on their bike? I’m guessing not many.)

With the Magnic LIght I wonder how visibility is on the side the lights aren’t mounted on. Good to see nice bright dynamos though.

Do people actually steal bike lights? The Knogs have never been swiped from my beater bike for higher risk adventures. Nobody has ever so much as rummaged through the trunk bag of my nice bike. In six or seven years, the four Velcro straps that lash it to my rack are the only security ever given to it or the nice roadside maintenance gear it contains.

Yes, people do steal them. I learned the hard way and have removed them ever since.

Yes, people DO steal bike lights. I ran into my dentist office for all one and a half minutes (yes, two minutes) to book an apt, leaving my bike locked to their porch railing. In that time, both my front and rear light were stolen. I have also had rear panniers stolen too. And bungee cords, and bike bottles. You name it, if it’s not nailed to the bike, it is a free for all.

Yep, you’ve just been lucky. I’ve also had saddles, seatposts, and tool bags stolen from my parked bikes. I now use $10 “Spok” lights from Planet Bike, that attach in 3 seconds with velcro straps, and come off even faster–they’re tiny so they fit unobtrusively in my pocket, and bright enough with a fresh button battery.

The City of Bikes

I like magnet light, the braking effect on the back light would be very useful. The (gotham) light wouldn’t really be all that useful for me, I always take my lights off when I lock up my bike or stop somewhere, only takes a second, I don’t think I would be motivated to spend the extra money on that one. I would be interested in the Magnet Light, looks great and no batteries!

The magnet light is really cool. For utility cycling, it’s all about convenience and not having to worry about batteries is one less impediment to cycling. I do wonder, however if the lights remain on after you come to a stop. There should be some kind of capacitor (I don’t know anything about this, forgive me) that sustains the lights for a a minute or two while you’re stopped at a light, chatting with someone, etc.

I like the Magnic lights, but I’ll wait for a less “Space-1999”-looking design–or even better, once a fender maker integrates the Magnic light into its fender design (it would better looking, AND more theft-resistant).

I don’t like the “Gotham” light for a couple of reasons: the revolver styling sends the wrong message in so many ways, and, if I’m going to use rechargeable batteries (which I am) then I’m going to have to change batteries more often. Having to use an allen wrench just to get the battery door open is going to be a pita.

The magnic light might not work with carbon rims, but what fraction of the commuter market is that? Otherwise it looks good except the current styling isn’t something I would care for.

The industrial design of the Gotham light is really cool, but at 50-60 lumens it’s just a blinkie, and a fairly large one at that. I already have a little blinkie that I don’t mind QR’ing and slipping in my pocket when I park.

What I really need is for my bigger, bulkier and far more expensive 500+ lumen light (along with its separate battery pack) — which I CAN’T easily just slip into a pocket — to be theft resistant so I don’t have to remove it and carry it around with me.

“…What I really need is for my bigger, bulkier and far more expensive 500+ lumen light (along with its separate battery pack) …”

Maybe you’re using a light with a battery pack because it offers longer run-time. There seems to be self contained lights that have 500 lumens. Check out the Serfas True from the MTBR Shootout:

For $150, that looks very interesting.

The mention of the external battery pack (which I plan to integrate into my bike later this year anyway) was an aside. Although integrated batteries make a simpler package to detach from the bike, ANY high powered light is still a bulky and heavy package that’s much less convenient to carry around with you when you’re off the bike.

To pdxpaul’s point about blinding MUP users (presumably he’s referring about the magnic, since the Gotham’s a dinky blinkie) I am a little surprised that a German designer would produce a bright light like that with a simple, dumb round beam. I thought European law required bike headlights to have a shaped beam with a sharp top cutoff (just as cars are required to have, both here and in Europe).

Can’t wait to be blinded by these lights when ignorant folks point them in the face of oncoming traffic on MUPs.
/curmudgeon

pdxpaul…have you heard about the light from Phillips that shapes the lights’ beam? I alluded to it in an earlier comment. The light housing seems to be quite a bit bigger than many lights today tend to be, which could diminish its appeal for some people. . From mtbr mag:

I’d like to see more of those out there. Anything not blinding oncoming bikes.

I truly like the magnic light because it is reliable. No batteries, no wiring, no expensive dynamo hub, very light weight.

If you have to have a battery operated, easy to use, very easy to take on and off light, then check out:
http://www.dinottelighting.com/Products.htm#Anchor-Pro-49575

I’ve owned one of the AA powered units for a couple of years using rechargeables. Very convenient and never had a lick of trouble. Spare battery holders are extremely easy to get at RadioShack.

I totally plan on buying one of the magnic lights as soon as they come out. goodbye batteries! wa-hoo!