Portland racing legend on the mend after serious stroke 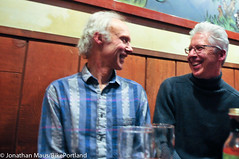 On November 16th, 2010, a man that friends and family thought would never stop pedaling his bike — did.

David Auker is a living legend in local and national bike racing circles. You might not know his name, but Auker was once one of the most feared racers on the west coast. He never signed a pro contract because he was too much of an independent spirit to go that route; but friends who were there back in the 1970s and ’80s say he won plenty of races against much more famous opponents like Alexi Grewal, Bob Roll, and others.

“In the old days,” former teammate Danny Knudsen recalled at a birthday party for Auker in Hillsdale last night, “the pros would not like to see Dave when they showed up. He’d ruin their plans.”

Auker’s racing prowess made it all that more shocking when his own plans to keep riding well into his 60s nearly came to an abrupt end. 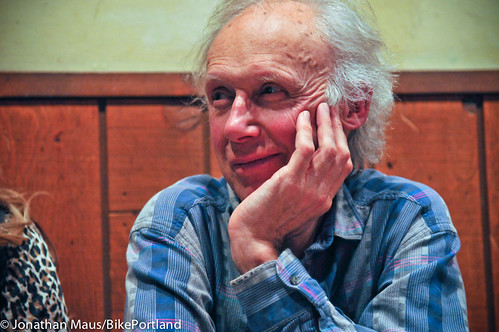 On that fateful day in November of 2010, Auker was out riding about a block from his home in the hills of Southwest Portland when he had a stroke. Rushed to OHSU, Auker was placed in the ICU. He had lost movement on his right side and he had bleeding in his brain. Friends and family prepared for the worst.

“I went and saw him in the hospital,” recalled Knudsen, “And thought I’d never see the man again.”

Thankfully, Auker got better. Maybe it was his excellent physical shape, or maybe it was just his dogged determination to get back on the bike. Just a few months after his stroke, David’s wife Sarah (they’ve been together over 40 years) says he woke up one day and said, “I should go ride my bike.” 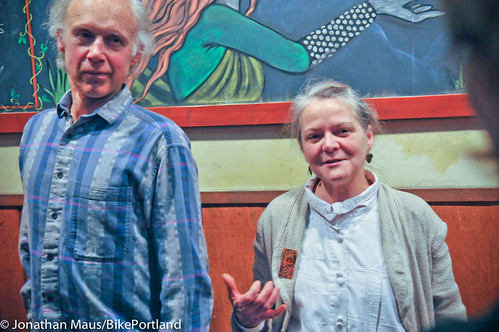 David and his wife Sarah.

Last night Auker was eager to tell me that he’s now riding 30-40 miles every day. Sarah says at first she would ride with him because his short-term memory is so faint that he would get lost even on roads he’s pedaled for decades. Now she rides the first few miles and then sets him off on his own. But still, “He takes the exact same route every time,” Sarah says, “Because he knows he’ll get lost if he doesn’t.” 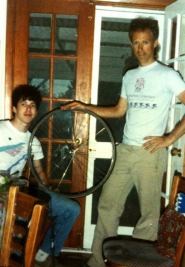 Auker (R) and Knudsen
a long time ago.

If you think Auker was just a bike racer, you should talk to Danny Knudsen.

Knudsen, a fit 42-year old with thick white hair who currently coaches the BicycleAttorney.com Cycling Team, calls Auker his mentor. “He really took me under his wing,” recalled Knudsen as Auker looked on, “He’s had a huge impact on my life.”

From how to pack his race-day gear bag, to using mind games as a way to vanquish stronger riders, to using mint-flavored dental floss to sew up flattened tubulars (the mint was for good luck), Knudsen said, “I couldn’t run my team without everything he’s taught me.”

Auker’s influence has been felt in other places as well.

He rode fixed geared bikes and led the local Sunday Fixie Ride long before the bikes became an urban phenomenon (he’s even mentioned in this 2005 AP story: Fixed-gear bikes now all the rage).

At his birthday gathering last night, Auker’s family and friends gathered around to count their blessings and share stories. I didn’t talk at length with Auker (he’s not exactly chatty these days, especially with someone like me who he’s only met a few times over the years); but I could tell he was feeling well and that he was especially happy to be riding again. 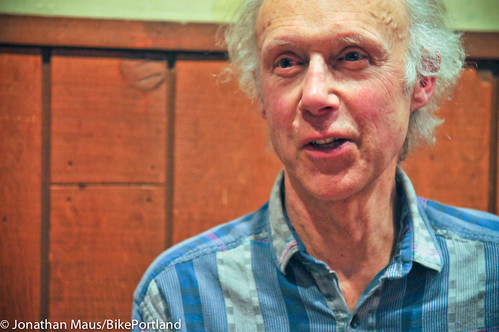 For such a competitive person like David, I can only imagine how hard it is to not feel like you can ride as far, as hard, and as often as you’d like. When the topic of his racing came up, David felt like he had to defend the fact that he wasn’t going to ever do it again. “I’ve done that,” he said with a tiny smile, “I’m not sure if it means I’m getting old or just moving on to other things.”

So sorry to hear this happened to David, & very gladdened to hear he’s now doing well. I had been wondering why I hadn’t spotted his distinctive aluminum-foil helmet out on the road for such a long while, until just last week.

See you out there soon, David!

Glad to hear David is still riding and making progress after a stroke. As a bike racer in the early 80’s I was always impressed with his riding. One of my fondest racing memories is David and John Beckman allowing me to ride away from them at a PIR series for a win. That generosity made a big impact on me.
Thanks,Hope to see you on the road!

I remember watching david 20 years ago when i was in high school, He would often compete in two race catagories in one day, and win sometimes both. You don’t see that happen anymore. I will always remember what looked like his relaxed race pace followed by everyone behind him looking like pure suffering and pain. Two years ago i watched you race single speed at Mt Tabor, you were beating people 40 years younger than you. I’ts people like him that drew me into the sport. I wish you would write a book about the progression of our local racing and your stories. I saw you on the springwater trail last week, I turned aroud to catch up, but still can’t catch you.

I like this guys story, it reminds me of that 70’s bike movie about the “cutters” and their local dude blowing away the guys on the circuit. Growing up in Oregon any local dudes racing probably would have been called the stoners.

I remember being off the back at the Tour of Willamette when David and another rider who were off the front caught up to me. They both slowed down and drug me along while encouraging me to keep on going. David has always been a class act. Keep at it David.

Tales of Auker stretched as far as the mid-south and the deep South in the 80’s. Men of this nature are in all the storied pasts of local legends. Mark Pace in the mid-west, and the John Legg’s of the south. John Legg past away here in Portland about a 2 years ago. I wonder if David Auker and John ever met? These are the type of folks that inspired me years ago,

As a kid growing up in Corvallis during the 1970s, I have fond memories of winter training rides with David (and others) meeting at the side of the “MU” on Sunday mornings and of mile-post sprints all the way down Peoria Road … and of the cake and pies (Cherry comes to mind) at the first Piece of Cake race.

Auker at PIR, maybe 1977. Front brake on the right, Merz bike, Kisslers on the shorts.

I showed up for the last 30 minutes of the party, and was so glad to finally meet David and his wife. I had heard so many great things about David from local racers and folks in the cycling community. Wishing David another great trip around the sun!

A few years ago, David hosted a Thanksgiving morning fixie ride in the hills. His wife Sarah provided a fabulous breakfast before hand. The weather was miserable, but I was grinning half the time – chasing David and his friends. Being with him in his element was a true thrill. Classy humble guy with such poise on and off the bike. I could never fully explain why, but that ride made me high. Happy David is part of our community and still riding.

David’s a kind soul with infectious enthusiasm for riding and connecting with bikers. One of the first times I met him he, and his kind wife, welcomed a few strangers over for some hot soup mid-ride. Sets his own pace on and off the bike.

Here’s a color photo of David racing – in green jersey with white Skid-Lid: