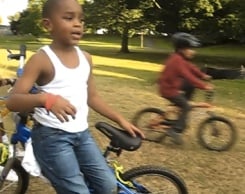 Breathless and tired from riding,
this kid is why pump tracks rule.
(Still from video – Watch it below)

I just watched a video that, in just over one minute, makes the case for pump tracks better than anything I’ve ever read, seen, or heard. The video (watch it below) was shot by Northwest Trail Alliance President Tom Archer back in September and uploaded to the City’s website a few days ago. It shows a swarm of kids devouring the newly built Ventura Park Pump Track out in East Portland.

If you have a heart and you love bikes, I will guarantee this is the best thing you will watch all week…

I called Tom to ask him about the video. He said the track was “getting swamped” like that every weekend in September. It’s been a huge hit with local kids; so much so that Tom says he’s working with the Portland Parks & Rec bureau to start a kids camp this spring and summer using Ventura Park Pump Track as a platform.

In my line of work I see advocates who work extremely hard over many years to make the case for their project or cause. I was pleasantly amazed at how this one amateur video made the case for more pump tracks in Portland in just over a minute. Nice work Tom — on the video and on the track. Here’s to many more of them being built in the years to come!

Did you see the ‘cross remount? Kid in black shirt @ 45sec. Hup hup!

We used to build these all the time as kids. Someone would eventually get hurt and the city would bulldoze the whole area.

I saw one with a helmet.

Where are the helmets???? Most of the kids are not wearing them…that should be a mandatory rule…NO HELMET…NO RIDING!!!

A Millner trying to sell hats?! Why I never…

Jeez, reeeeeeeelax. The odds of head trauma in this situation are very low. Arm breaks, collarbones, knee injuries, wrist sprains etc. There are no rocks or hard edges? surfaces. A child would be more likely to sustain a neck injury at a pump track, as opposed to a skull fracture, which in my opinion would only be accentuated by helmet use anyway.

I saw them ALL having fun out doors and getting exercise.

I’d say the pump track at Ventura Park is off to a pretty good start!

My son and I LOVE this track. I ride my “zoobomber” and we’re like two 5 year olds tearing it up on 16 inch wheels. People actually stop and chat we’re having so much obvious fun.

It’s a bummer when it’s wet. We feel we’re too hard on the track when it’s muddy.

Too awesome for words. Kids on bikes meeting neighbors, having fun, and getting exercise. Doesn’t get much better than that. Great work NWTA. I wish I had one of these around when I was a kid.

And we’d be negligent not to give a shout out to our primary fiscal sponsor of the track, Portland Design works. They kicked down nearly $5k to fund this project, which covers nearly all the cost. Thanks PDW!

This gives me hope for our future.

I see no helmets, sometimes I say something when their parents are whithin distance and i get dirty looks.

Funny, I get dirty looks from people when I pass my kid the bong. People are so quick to judge!

Dang kids, tearing up public infrastructure! They’d never get away with this in Sherwood!

Awesome video! I wonder if Mrs Dibbly would ride it with me on the tandem….

I’ll worry about kids on bikes not wearing helmets, when it’s mandatory for kids to wear helmets in cars.

A car is just a helmet for the whole body. 😉

awesome! salem is due for one next!!

This is such a HUGE success for the kids, young and old, in PDX. We all need places to play. I checked out the pumptrack on a day this Winter when the temps were in the low 30s and there were people riding it then too! I hope this is the first of many new off-road projects. Portland is a great place for cyclists, and there are plenty of places to make it just as great for off-road cyclists too.

Why are they called pump tracks?

Tom Archer is a great guy, and these projects add so much joy to a neighborhood that is lucky enough to get one. It is my hope that Portland is peppered with them!!! I suggest to everyone reading this, to volunteer and help Tom and the NWTA when these projects come up in the future. It is a blast to help watch the pump track develop! peace.

Friends of Forest Park better shut this place down, quick. Heaven forbid people have fun riding their bikes on dirt in this town.

Most parks should have a pumptrack. They don’t take up much space, and the materials are fairly cheap (clean dirt, donated labor). I hope we see more of these in town.