Detail from rendering of
dedicated entrance to bike
parking facilities.

Oregon Health and Science University (OHSU) — a school that has grabbed our attention several times in the past for their encouragement of bicycling among faculty and staff — has a new building in the works and they say it, “will set a new standard for the quality of bicycle facilities.”

Those are lofty words, so we got a closer look at the plans from Campus Planning and Development Director Brian Newman.

How the new Collaborative Life Sciences building will look in the evening.

The $295 million, 500,000 square-foot Collaborative Life Sciences Building will be built off of SW Moody Avenue adjacent to OHSU’s other campus buildings in the South Waterfront district. 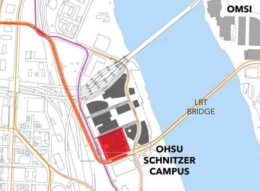 Newman tells us that bike parking has been dispersed throughout the site and that, when completed, it will include 418 total spaces. The bike parking includes 268 short-term spots scattered throughout the sidewalk and plaza areas and 150 long-term spaces inside the building (with an additional 150, secure long-term spaces possible if demand warrants).

Here’s another image taken from a recent presentation OHSU made to the Portland Design Commission: 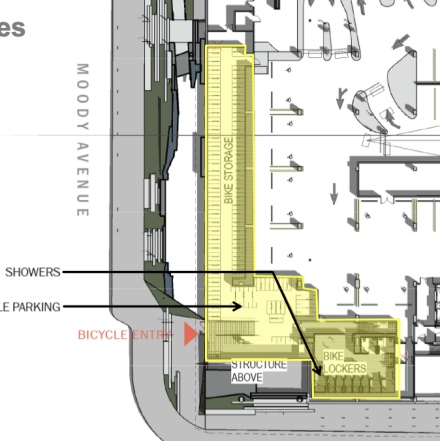 One of the most impressive aspects of the building is the dedicated, secured bicycle entrance “in a highly visible location” at the corner of SW Moody Ave and Porter Street. The bike parking entrance just so happens to be right across the street from the new cycle track on SW Moody Avenue and it will be easily accessible to people bicycling to the building from the future TriMet light rail bridge.

OHSU’s Newman says the location of the bike entrance is symbolic: “It is easily the most visible corner of the building which is a timely change from bicyclists being relegated to the “back” door.”

In addition to the indoor bike parking, there will be fully-featured daytime lockers, bathrooms and six unisex shower/changing rooms, two changing rooms without showers, and an interior stairways leading from the bicycle area into the main building lobby.

With so many people already biking in and around OHSU’s South Waterfront campus and with many more projected in the years to come, they are very smart to include them in this design.

Construction has already begun on the building and it’s slated to open in August 2013 and be fully completed by the spring of 2014.

Thanks for highlighting the project Jonathan. I just want to add that while the building is the first to be built on the new OHSU Schnitzer Campus, the project is a partnership with the Oregon University System (Portland State and Oregon State Universities). It is a real team effort between the three schools.

Also, the building is on track to achieve a LEED Platinum designation. The architects are Sera from here in Portland and CO from LA. We are particularly pleased with the prominant location of the dedicated bike entrance at the 100% corner of SW Moody and future Porter Street. It is easily the most visible corner of the building which is a timely change from bicyclists being relegated to the “back” door.

Wow! Makes me want to go back to school… Really, fantastic design and congratulations to OHSU on such a forward looking project.

It’s an exciting project. One way in which this facility represents a different way of thinking is that capacity was determined by how many bikes were actually projected to be on campus–which actually raised the standard beyond even what LEED platinum would require.

PSU students may recognize the building as it was displayed prominently on their homepage throughout the Fall semester. The building will be serving a wide spectrum of students.

are
Reply to  Sigma

presumably people are using these one at a time. the idea is not to dedicate an unused shower space to one sex while there is a waiting line forming for the other.

Single shower stalls, like at state park campground showers (the new ones). For the last decade or so, the push has been for individual shower units rather than communal ones.

It’s great to know where the bicycle entrance is, thanks for this! The new signal for the intersection is being designed with the Portland to Milwaukie light rail project and it’s good to know that the entry is there.

This building is also at the west end of the new transit/bike/pedestrian bridge under construction on the Willamette. Note: no cars allowed! This is part of the new Portland-Milwaukie Light Rail project being built by TriMet. I imagine this river crossing will become a major route for cyclists in the city. The pieces are falling into place.

Brian N. – It’s great to hear that you’ve got a local, progressively-minded architecture firm on this!

While I appreciate the bike parking/facilities, a $295 million, 500,000 square-foot building make me wonder when the OHSU growth will stop. Did I miss how it is getting paid for?

At least someone is growing. We can’t all make a living making and selling bicycles to each other.

When the prices of health care and/or education start falling.