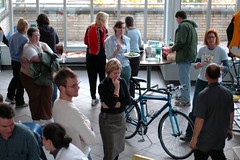 OHSU is Portland’s largest employer with 12,400 employees and is the largest organization to ever win a gold or higher designation from the League. The award was announced last month but League representatives presented OHSU with the award today.

Among the reasons cited for OHSU’s bike-friendliness include many things you might recall reading about here on BikePortland. There’s the financial incentive program to encourage bicycling (complete w/ an interactive website to track bike trips), a new bike shop at the base of the Aerial Tram, and of course their proactive efforts (including a free bike valet service) to avert a “traffic crisis” by promoting more bike use during a recent road closure. 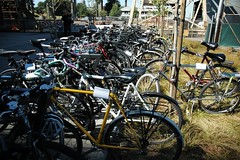 The overflow of bikes parked
at the base of the Aerial Tram
is a clear sign of biking’s popularity
at OHSU.

OHSU also has a manager of transportation options. John Landolfe currently fills that position and he has worked hard to make bicycling better. You might have met him at our Southwest Portland Get Together event or you might have seen him around town. Having a dedicated employee to focus on encouragement and awareness of biking and transit is crucial.

This award gave me reason to peruse the BikePortland archives. Back in May 2006 things weren’t so rosy for bikes at OHSU. Employees and advocates raised serious concerns about the lack of secure bike parking. One former staffer even left her job because she felt OHSU transportation and parking department staff didn’t seem to care.

It’s great to know that things have changed for the better in terms of bicycling at OHSU. They’re a perfect example to other large companies that efforts to encourage bicycling lead to positive results.

I’d be curious to know what fraction of employees bike or walk to OHSU?

A previous article about OHSU’s bike incentive program said that 10% of all OHSU employees ere enrolled in the program.

Of course, not everyone will bike all the time or continue to use it once registered, but that gives a pretty good ballpark figure.

Funny you should ask. With the Bike Commute Challenge just wrapping up, I did a search for teams with OHSU in the name. There are a number of small teams that identify themselves by department or location. The biggest active one claims 10223 employees for the workplace, 246 riders for the team, and a mode share of 1.4% bicycle commuting.

I can say that 8% have logged 10 or more trips via the OHSU Bike Program application in the past 3 months. Our ECO survey, which asks what primary mode a person used in the previous week puts the number at 8%. The most recent scientific survey of students reported 21% (note that our student pool is smaller than our employee pool). 14% have registered with the Bike Program in the past 12 months.

So, I generally just say “a bunch.”

OHSU’s support for cycling pays dividends not just for employees, but for patients and their families, too. I really hope they keep it up.

My three year old son is receiving follow up care at Doernbecher Children’s for his second bone marrow transplant. He and I commute from North Clackamas on an e-assist cargo bike. We can make it up to the top of pill hill when traffic is light. But during a normal weekday, traffic on the hospital grounds makes that narrow bike lane pretty tough to navigate on a cargo bike.

We have taken to using the valet parking at the tram and going up the hill that way. It’s much, much less stressful for us, and I like knowing that our car replacement is secure and will be there when we get back.

I’ve heard that OHSU has extended the valet bike parking contract through the end of this month. I was glad to hear that because there just aren’t enough staple racks at the tram for us to have any chance of finding parking. I hope this award encourages OHSU to extend make the bike services at the Tram permanent courtesies for their employees and their patients.

Todd, if you ever need to strategize on parking your bike at OHSU, you can contact me directly at bike at ohsu.edu or 503-494-2555 and we can work out a solution. We’re looking at future plans for a valet but since I can never confirm nor deny any long term service, I want to give you a back up. Really glad to hear it’s worked so well for you thus far.

Also generally for larger trailer bikes, note that there’s a little used bike parking area behind the 1 story building adjacent to the bike valet. The area has a patient services attendant year round, which would deter theft (you’d still want to lock your bike).

Thanks a bunch, John. I really appreciate your taking the time to share that info and to talk directly if needed. I’ll take a look for that rack and will also check out the rack in the garage that Jeff mentioned. But I doubt I want to try hanging our long john on the racks he talked about.

Also, I meant to say “neither” not the much more gloomy “never.” Heheh. We’ll update the community as things develop.

I believe there is talk of making the valet service permanent, but have not heard any follow-up for a few weeks. There are about 2000 signed up for the incentive program (not sure if students are included in that number), but they don’t all ride every day obviously.
there are other benefits too however…OHSU main health insurance premium’s have decreased (yes, with a D.E.-) for the past two years, and the commuter incentive program is one of several preventive health service incentives available at OHSU to help that trend continue. Definitely positive trends all around – Landolph and staff are doing a good job.

Todd – there are plenty of spaces on the first 2 levels of the parking garage of the CHH.
Dry, covered, secure.

Thanks very much for the tip. I’ll certainly take a look the next time we’re there.

Todd-
Caveat – The secure stalls are for employees with badge access only, however there are racks at the bottom of the parking garage ramp that often have space. There are also outside hanging racks on the backside of the separation wall next to the facilities outbuilding to the east of CHH, east of the valet, which are almost always empty.

I’ve always found this campus to be quite difficult to access via walking. There are very few paths up to accessible areas from Terwilliger/West side of the Hill. There are two main roads that have no shoulder or have sidewalks on one side that are rather narrow.

On the plus side there are some great hiking trails around there.

With all the bikers do you think they could give input to the ever changing and less navigatible Moody.

We need to share the road, but the detours are getting stranger and less friendly every week.