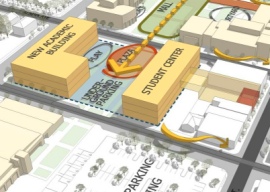 Portland Community College has approved plans for a new parking garage at their Cascade campus in North Portland — and it won’t be the four-story, $9 million structure that many people (including myself) were concerned about due to its potential impacts on the future Michigan Ave bike boulevard.

Instead, PCC announced today that a proposal for an underground parking facility on N. Jessup between N. Albina and Mississippi was approved in late December and they’re “going forward with it.”

“The underground parking facility is to be located below what are now surface lots in the blocks between North Albina and Mississippi avenues. It will lie between two of the new (yet-to-be built) campus buildings — the Student Center and the New Academic Building — and should add about 75 parking spaces to the campus’ capacity.”

“To reach ambitious but achievable TDM goals is both an opportunity and a challenge. I believe we are up to that challenge and that we can be a great example to the rest of the PCC community.”
— Algie Gatewood, PCC Cascade Campus President

In a letter, PCC Cascade Campus president Dr. Algie Gatewood told staff, students and community stakeholders that the issue of parking, “has loomed large in the minds of the campus and neighborhood alike.”

“In selecting the underground parking option over an above-ground option, the campus weighed cost; benefit to the community; safety, security and operational issues; efficient use of land, opportunities for future campus development; and impacts to the adjacent North Killingsworth business corridor. Building below-ground parking between the two new buildings helps the campus preserve a full city block for future development and maintain the character and aesthetics of the neighborhood.”

Gatewood also makes it clear that the new parking structure won’t satiate the campus’s demand (enrollment has increased by 27 percent since the bond paying for the project was passed by voters in 2008) without an accompanying commitment to reducing the number of single-occupancy vehicles (SOVs) driving to the campus.

To that end, Gatewood said the college is working with transportation demand management (TDM) experts on a variety of strategies, “that will help to facilitate the use of alternative transportation, reduce reliance on SOVs, help meet the goals of the College’s Climate Action Plan and maintain access to education.”

The transportation goals are “ambitious but achievable” says Gatewood. “I believe we are up to that challenge and that we can be a great example to the rest of the PCC community.”

Thanks to Jonathan and all others who weighed in on the topic in remarks to PCC, and I’m glad they decided to go with a smarter option.

On that note, if PCC wants to reduce SOVs they can start with expanding the discounted transit pass program. When I took classes at Cascade last quarter, there was an automatic set-aside in my scholarship dough for a $50 parking pass (even tho I live only 1mi away, and do not own a car). But when I inquired about transit passes, I was told they have only a limited number to distribute each quarter, and they usually sell out quickly.

As is often the case, it seems like PCC’s TDM problems stem from poor prioritization.

If PCC were to, for example, expand the discounted transit pass program, push for cycletrack facilities on Killingsworth and Williams and better/safer pedestrian facilities in the area, make sure Cascade gets kiosks in the case of eventual PDX bikeshare expansion, increase bus/shuttle service and encourage (or somehow facilitate – say, thru a smartphone app) carshare/carpool among their students, while also cracking down on unpermitted parking in the adjoining res. neighborhoods, it could go a long way in satisfying demand. And with a 27% uptick in enrollment, I’m willing to wager they can afford doing some or all of these, and that money would be better-spent than installing more parking spaces at 30k a pop.

Amen to all that, PedInPDX.
Some of this is hard to believe. First decide to build a million dollar underground parking structure and then consider tweaking much cheaper already tried and true parameters to discourage driving. Ha. Whose money is this exactly that is being spent on this underground parking? Why pick only on SOVs, how about any vehicles that take up that much land for parking? Is it really that big of a difference if *two* people are sitting in a car that once it arrives on campus needs a parking space instead of just one?

Why is anyone driving to PCC? We’re going to have to figure out how to get there without relying on cars soon enough, why not spend the money on figuring that out instead of the garage? That at least would be money that would pay dividends for ever rather than just until the cheap oil runs out.

They are probably driving because they cannot afford to live in the immediate neighborhood, or close enough to make biking easy. They also might have jobs they need to get to quickly. Their transportation (housing) situation might be a bit different than the average bikeportland.org reader.

Not $1 million, $seven-and-a-half million! My mistake.

$7.5M/75 new parking spaces is not equal to $30,000 ea. What am I missing? At $357 per student PCC could probably buy all 21,000 students a bike and a bus pass and install bike parking and still come out ahead.
Of course this is just an exercise. There would be no reason to by them all bikes. Many probably already have them. The point is, that money could go a lot further if the people in charge would stop thinking of cars as the primary way to get around, as something we need to accommodate, always.

They could also use a a small portion of this to step up the inter-campus shuttle service. It’s pretty good, but more frequency would serve more students, who often have classes at different campuses. Oh, and the shuttle makes some other stops as well.

When I went to college in the way-back, I used to leave campus during the large blocks of time in between classes. When I did not drive, I tended to stay on campus more.

It was a case of my requirements for running around totally expanded to fill my capacity for doing so. Had you asked me then, I would have assured you that I needed my car because I had to criss-cross town 6 or 7 times a day.

9watts’s comment about simply thinking about the problem more systematically is a really insightful thought. It’s breakthrough thinking to consider *not* building this structure at all and instead put together a package that could offer a far superior solution. *And*… here’s a thought, market what they’ve done as a future-thinking livable innovative choice. It’ll probably improve status. Status is important for a university looking to recruit the brightest students and faculty. I mean, hey, build a parking garage, Yawn eh?

This new project sounds like a great opportunity to have a separate ramp for bike traffic to reach the new Underground bike parking from the bike blvd. Versus mixing with car traffic etc.

did they say how much to park a bike?