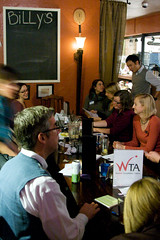 People gathered at a bar in
Beaverton to give thanks to
those who help make projects
happen.
(Photos: Will Vanlue)

Earlier this week the Westside Transportation Alliance (WTA) gathered a group of advocates and citizens from around Washington County to write thank-you notes to people who have helped promote and improve conditions for bicycling, walking, and public transit in the region.

The WTA hosted the event at Billy’s Bar, a new locally-owned business in Beaverton.

The focus of advocacy work is often on activities before a project takes place: letter writing, testifying at meetings, calling elected officials, and etc. After a project is complete it’s easy to move on to the next big thing while forgetting to take the time to thank everyone who made past projects successful.

In September of last year, Active Right Of Way (AROW), the Bicycle Business League, and Icicle Tricycles demonstrated the impact you can make by saying “thank you” when they handed out free ice cream to construction crews working on the NE Cully cycle track.

The WTA’s event this week had the same goal — making sure people know their work is appreciated — but the evening was tailored to the unique landscape of the transportation network and political structure in Washington County.

Transportation projects in Washington County can involve a large and complex group of stakeholders.

Twenty-six different city-level jurisdictions (Beaverton, Hillsboro, Tigard, and many others) along with various county and state agencies have control of different sections of the county. Most projects on roads, trails, or other pieces of the transportation network cross more than one city line. Each jurisdiction has its own group of citizens, political leaders, and businesses all with their own needs, preferences, and opinions.

With the long list of people at the table during Washington County’s transportation projects it’s easy to lose track of some of the people involved in a particular project.

To help everyone at this week’s event sort that list out, and to offer creative fodder for the thank-you notes, the WTA had a list of over 50 people who help promote and encourage bicycling, walking, and public transit in Washington County. The list included each person’s name, the group they work for, and what they’ve accomplished recently.

As the notes were being written I heard a lot of comments along the lines of, “I had no idea they were the ones who painted that bike lane near my house!” 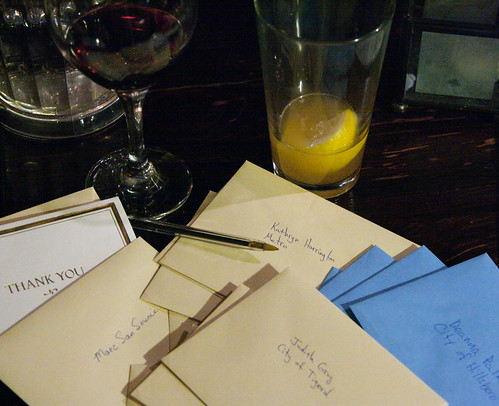 There are many people to thank for
everything that happens in Washington County.

Heather McCarey, the WTA’s Executive Director, highlighted how important it is to stop and reflect on successes and to connect with other people in this often-overlooked way:

“It’s easy to point out things we want to change, but we often forget to acknowledge all the great work that’s already happening. The Westside Transportation Alliance wanted to bring attention to the positive efforts that are pushing the active transportation movement forward in Washington County… This is our way of offering well-deserved thanks.

When I was growing up my mother always told me that I should write thank-you notes after my birthday, otherwise people might not give me presents the next year.

Politics and advocacy are similar: if you’re only focused on the next thing you want, people may not realize the difference they’ve made with their past work. The effort people spend on public projects is like a gift to the community. The WTA’s event made sure those people received some well-deserved thanks.

Dang… I would have liked to have participated in that. That said…

I’d like to Thank everybody who takes a moment of their time to work for improving things for every user of the right of way.

Thanks to everyone who showed up to make this event a success. We hope to do more of them in the future.

The struggle in bringing to fruition a new mindset around transportation options in this type of complicated setting is a daunting one. Props to all those working to make the future better, if possible. My home town still struggles with this exact issue. Numerous small municipalities encased with in three county’s. Fed funding forever road blocked due to disinterest in certain sectors,and that put the brakes on so many options. Good luck WTA!

I think that this is a fanstastic idea. I always try to thank the presenters in a public meeting, but written thank you’s are a great way of keeping in touch with people who make things happen. I forwarded this story to everyone in my advocacy organization, and we’re going to devote part of our next meeting to writing and signing thank you notes to officials who have gone the extra mile in the last year.