“I see a greater need for civil disobedience and believe the success of the movement will mean long term safety for all vulnerable uses of our streets.”
— Dan Kaufman

Sellwood resident Dan Kaufman is no stranger to BikePortland. The man behind Crank My Chain! CycleTV has helped us with video projects in the past like coverage of the Aerial Tram and a video ad. His most recent project is a new video about the effort to ban studded tires in Oregon. 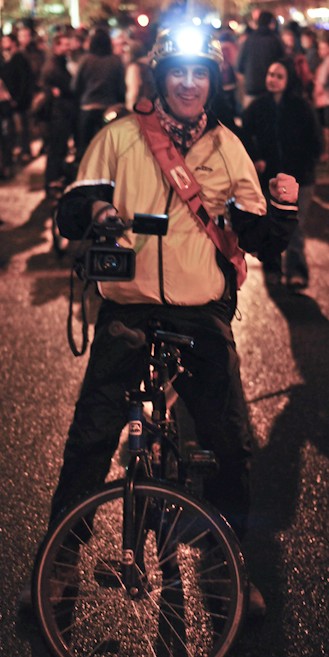 Dan is a father of three boys, a professional videographer, a musician, and an entertainer — but he’s a transportation activist at heart. He has gotten swept up in the local ‘Occupy’ movement. Below he answers a few of my questions about the movement, his role in it, and why he feels it’s important…

What have you done so far to participate in the local Occupy movement?
“I attended and livestreamed the original OWS solidarity march. I have participated in and supported several meetings and discussions live and online. I videotaped part of Sunday’s rally against the eviction and then brought down the disco trike to celebrate the success of the night – knowing full well the camp would eventually be cleared. I have written poetry, music, and twitter/FB posts in support. I helped organize the bike/ped action committee which organized the swarm.”

Why are you doing it?
“I see first hand how the economic crises is effecting most of us. It is creating economic casualties and refugees. All the while, the Dow Jones continues to climb and corporate profits/CEO pay soars. Trickle down didn’t work and now the system is broken. It will take fundamental repairs and paradigm shifts. The sooner the better for all.

At the heart is of our problems is the overweight influence of money in government decisions and peak oil (which we have passed, by the way). None of our leaders can or will address the real issues so it is time for the people to lead. That has been manifested in the occupy movement, which I hope can remain peaceful and inclusive.”

Some people feel that mixing bicycling and this movement politicizes bikes. Do you see it that way?
“It is a very valid concern. We are already so overexposed as bicyclists (naked if you will) and we carry all the negative baggage of scofflaws that no other mode must. Does anybody every complain about “all you speeding motorists” for example?

However, I see a greater need for civil disobedience and believe the success of the movement will mean long term safety for all vulnerable uses of our streets. So it is imperative to me that the bicycle actions remain peaceful and civil. It should attempt to minimize the disruption for the “99%” but that won’t always be possible. No matter what measures we take, this revolution away from the status quo is going to bother and offend some people the same way people on bicycles always manage to do (sadly).”

Do you think other people who care about human-powered transportation and bicycling should participate?
“Definitely, I hope that everyone who believes the government and road systems need an overhaul will join in as much as they can. Especially in actions and the meetings. Human power is the best tool we have at our disposal.”

Where can people follow your work?
“CrankMyChain! Cycle TV is the best place to see my work. My video production company is PDXK Productions – I am available for hire and need community support (volunteer, money or promotion) to continue putting the effort into this movement that I am. My knees are sore from riding the disco trike everywhere I have been working on minimum sleep and family time; but I believe the task at hand is critical if we wish to preserve our government of the people, by the people and for the people. I am very serious! I also want to plug in bike fun and music into the movement. The positive response and need for these contributions is immediately obvious and amazing.”
—
Thanks for sharing your thoughts Dan. Good luck out there and we’ll see you in the streets.

Know someone else we should feature in “5 questions with?”. Get in touch.

Because of the Chase branch on the first floow my building is being picketed and all the doors are being locked up. It is a really pain the butt to about my daily life. I wouldn’t really care except there are no coherant goals. “Bank Bad, 99% good” just doesn’t say anything to me. If you want Occupy to be more than another portland free ride for the druggies and homless, you guys really need to come up with a plan.

Whoop! One of the most beautiful moments of my life was when the bike swarm opened the streets back up at 6am on Monday. Great Idea Dan, so glad to be apart of that.

Trickle down doesnt work? How would we know? The current economic crises can be laid mostly at the feet of govt, yet the occupy crowd demands more govt. Weird. Fannie and Freddie led the housing crisis spurred by govt-sponsored mortgage financing and govt encouragement to expand home ownership. Employers tell us everyday that we wont hire because of obamacare and govt taxation. Govt keeps bailing out failing firms, wasting money on politically-connected green energy firms, and non-existent shovel-ready projects that will never get started anyway due to … govt regs. But lets expand govt power and increase govt power…smart lol.

Beg to differ, Jon. We’ve had pretty much 30-years of it.

Maybe we’re probably not as far off as you think, though. Eg., I believe we’d do more for bicycling and the environment by ending all these contracts, payouts, freebies and write-offs for the Big Oil, Big Coal, and Big War’s 1% than any new law or program ever could.

30 years of trickle-down got us in this mess. Unregulated banking turned our financial institutions into casinos that laid waste to our 401Ks. Concentration of wealth in the 1% allows them to buy politicians and the media and make their own regulatory laws. They run the show. But I think many of the wealthy are uneasy about this, sitting on top of heaps of $$ while society around them is crumbling.

I would prefer to subsidize green energy, NOT big oil. Time to move on from fossil fuel.

PS – Jonathan, thanks for the write up. I’ve done a bit to promote an occupy face-off in the big B “Bicycle-Community”.

I want people to know that I think about these things every day and I am listening carefully. I will follow posts here & folks are welcome to email me at dan AT pdxk..com or best yet, come down to one of the General Assembly meetings or actions and let me know what you think about bicycle revolution.

Thanks for all of your great work, and your bike fun, Dan. You are an inspiration!

Thanks for your leadership, Dan!