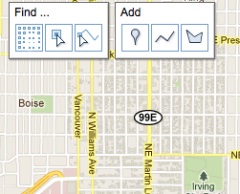 Google will be in town Thursday for a “MapUp” event to raise are awareness of (and participation in) their Google Map Maker feature.

Map Maker is Google’s attempt to let anyone edit its vaunted map and have the additions go public to its millions of users. The application lets people add in their favorite short-cuts, places, favorite bike routes, and so on. Since people on bikes tend to interact more intimately with their surroundings and rely on shortcuts and safe route suggestions more than other road users, mapping technology like this can be very useful.


Alexis Grant, a Portland resident who works in Wilsonville, has already started contributing to Google Maps with the Map Maker feature. “I’d submitted a couple of issues to Google previously, and found that to be a slow process… When they popped up the option to edit directly I thought that was a real improvement.”

Grant adds that, because she experiences the city primarily on foot and by bike, she hopes her additions make Google Maps more accurate for others who do the same.

Another map application that uses crowd-sourced data is OpenStreetMap (Elly Blue included them in a profile of online mapping tools back in 2009). OSM is open-source and is owned by the people who contribute to it, unlike Google Maps, which is a private entity. Grant says she has mixed feelings about adding to a privately-owned data source, but that in the end it’s “more beneficial to me to update the mapping system I use all the time.”

If you want to get the skinny on Google Map Maker and meet the people behind it (and Google Places), join them for the “MapUp” event this Thursday night (9/1) at the Ecotrust Building (721 NW 9th Ave) from 6:00 – 9:00 pm. They’ll even be giving away a Google Chrome netbook! Registration is required, so go here to let them know you’re coming.

I’ll be there. I’m hoping to get some insight into how to fix some problems on the west-side speicifcally the fact that gmaps currently routes folks onto the north shoulder of US-26 in both directions.

sweet, we’ll see if they’ll accept my change to remove the bicycle lane from lovejoy…

I hope the data collected from Map Maker will eventually be made public. I can see Map Maker taking away some of the volunteer effort that goes into improving and updating projects like OpenStreetMap.

FYI OpenStreetMap is going to be used by TriMet for their new trip planner (beta out in mid-October), which will include bike and bike-to-transit trip planning. So please consider using OSM too, especially if you have qualms about private data! TriMet mapping parties for OSM should be happening soon. OpenStreetMap: http://www.openstreetmap.org/ OpenTripPlanner: http://opentripplanner.com/

FWIW, after I corresponded with Jonathan, I did look up what it takes to edit OSM and I hope to start using it too.

Back in the day, when people would trade in their time, knowledge and/or experience in order to help a corporation create value and make money, we called it work and those people were paid for their efforts.

Hm. I wonder if some of these tricks (about which I know nothing) would permit the following glitch (in my view) to be fixed. I really like and appreciate googlemaps’ bike option, but I’ve noticed that when I’m heading diagonally across town, googlemaps introduces umpteen jigs and jogs. I don’t know if this has to do with software that favors bike boulevards, or what, but ignoring most of the jigs and jogs I was able to get to my destination yesterday by taking Fremont, Williams, Alberta, Interstate,& Ainsworth rather than the impossible-to-remember route proposed. Does anyone else notice this? Cars aren’t routed to make 25 left and right turns to travel 6 miles, why should bikes?

When I used Google to find a route to work – from near Division New Seasons to Johns Landing – it had me using both the alleys in Ladd’s Addition as well as the Ross Island Bridge!

I have also noticed the zig-zag tendency. I usually can find a better route in areas I’m not familiar with by using the City of Portland Neighborhood bike maps.

Google rocks…I’m waiting for
“Google Constellation” where I can pick a gps Loc & it will show me the stars & planets relative to where I stand. 🙂

There are a number of those services already available for iPhone and Android. I use Pocket Universe.

I agree with the zig-zagginess of the bike option. Also, I used the bike option in Google Maps to plot a route to my daughter’s school (Ainsworth Elementary in the SW) and it wants me to ride up Montgomery (VERY STEEP HILL) and go past the school higher on the hill instead of just taking a simple left turn on to Vista. Very odd.

This is a bit disheartening to think that Jonathan would rather recommend people volunteer for a commercial interest that retains ownership of their contributions instead of OpenStreetMap, which is a 401(c)3, compatible with a wider variety of devices (like Garmin’s bicycle GPSs) and lets you retain ownership of your contributions. Why tell people to work for free for someone else’s profit, Jon?

I’m sharing information about an event that I think people might enjoy from a company that is known to make good products. People can decide whether or not to show up. I know you are a fan of OSM and that’s cool.. but please don’t mischaracterize my intentions. Thanks.

Really hard to mischaracterize given the number of OpenStreetMap mentions, even when articles were submitted mentioning TriMet’s volunteerism in the effort, which to date is zero, and this. Actions speak louder than words.