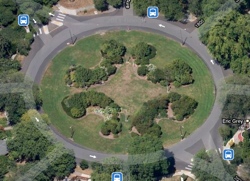 Remember Portlander Merritt Raitt? He’s the amateur filmmaker whose “Commuter Dreams” piece went viral (over 64,000 views and counting), became the toast of film festivals nationwide, and even won him a trip to the Tour de France.

Raitt’s next project is based just a few feet from his front door near Ladd Circle in Southeast Portland.

“I often ride centuries on the weekend,” Raitt told me about his new project, “and for some time now I have been thinking that it would be cool to ride a century on the circle.”

So on Sunday, with friends and family cheering him on, Raitt pedaled 650 laps around Ladd Circle, completing 100 miles in five hours and 10 minutes.

Did he get dizzy? Not quite says his wife Sue Shattuc. “The circle was just big enough to mitigate getting woozy.”

Even without hills, 100 miles is 100 miles. “It was much harder than I thought,” said Raitt after the ride.

Stay tuned for the release of the film. Who knows, maybe it will spur a new ride idea — The Ladd Circle Century.

I rolled through there on Sunday, sorry I missed him. I’ve toyed with the idea of doing this for Fat Cyclist’s 100 Miles of Nowhere fund raiser – maybe next year!

You should. I used a .15 mile loop at the top of my hill one year. The 100 MoN is legendary around my house.

He had a smile on his face, for sure! 100 miles *is* 100 miles. I think unless you actually force yourself to stop, you could do the whole 100 without any stops. Because technically, when you’re in the circle, you have the right of way! So maybe if he didn’t take enough “rest stops” (as on organized rides) it probably was even harder than any old century 🙂 Well done, Merritt!

Yeah I went through there around 4:30 pm on Sunday, maybe he was done by then?

Regardless, that is really awesome! I dare say, it may even be mentally harder than a ‘standard’ century because you have no new scenery the whole time, and for every hard uphill there is a coasting rest period down the other side… no coasting around Ladd, at least not for very long!

If he had worn a helmet cam, just think of the offpeak footage we’d have of stop sign behavior.

“Stay tuned for the release of the film.”
oh, I didn’t see that part. Hm.

was this this on the outside of the circle? or the inside?

surely closer to the inside. If you were on the outside doing this stunt I’d think it would not reflect well on biking behavior, and isn’t that the reason (or one) that those lanes are so ridiculously wide–that the Merritt Raitts’ of the world can do their thing without disrupting the ‘normal’ flow of traffic?

Google maps calls it out as 0.2 miles around the circle which would work out to 500 laps. I’m guessing he took an inner track and used a computer on his handlebars to tick down the distance.

Clockwise or counter clockwise? Counter would be the outer lane, hence fewer laps? I guess one could switch directions once in awhile for a change of “scenery”.

LOL, your country has strange and fascinating traffic laws, that I look forward to understanding in more detail. All the traffic circles I’ve ever seen in the US (including this one) are counter clockwise for all lanes (technically, this one is just one very wide lane).

The mayhem of having traffic run both ways in a traffic circle would be something to see!

“Clockwise or counter clockwise? Counter would be the outer lane”
Huh?

Nascar for cycling…
… is this good or bad?

Uh oh, I hope this isn’t used as evidence that only white people cycle!

Husband and I got married in Ladd’s Circle and our 16th anniversary is this Friday. We were wondering what to do to celebrate. Maybe we’ll ride laps. (He proposed to me when we stopped there on a bike ride.)

OK, think about it: Traveling clockwise in the correct, right / inner lane is the shortest way around the circle.

we/I did think about it. Are you really under the impression that the circle has lanes going in opposite directions?

This thing is a one way street. You must not be from Portland. 🙂

It’d be cool to see a group, a dozen or more, people try this at the same time. Maybe a Pedalpalooza ride is in order next year. Having 20+ bikes doing laps for 5+ hours might muck up the circle, but it would be a fun event to watch, NASCAR-style.

My sense of the surreal kicked in:
Go whole hog.
Get everyone in full safety gear like Nascar drivers.
Setup low impact fences for crashes.
Get a big ol’ crowd of drunk hipsters (PBR only?) On camp chairs to scream when cyclists crash.
Make sure to sell overpriced junk to the fans.
Maybe get a sag wagon and setup a raucous tailgate party hours in advance.

Gotta stop, too much laughing at the ridiculousness of real Nascar

If 650 laps is 100 miles, then I have probably biked a centuries worth around that circle over the past two years (I bike through there almost every single day, so probably 325 days a year, for usually one exact lap a day).

I’ve often dreamed of a Portland Palio on Ladd’s, with racers on track bikes representing different neighborhoods, for a 3 lap sprint around the circle. Elimination races by ‘hood, with a 15-20 rider race for the city title.

Me too! Same exact thought – down to the neighborhoods. I wonder how many people actually know about Il Palio – Siena is such an awesome town. Wonder how tough it would be to organize an event like that. Hollywood had no trouble detouring people to film their movie there… (I’m sure they had permits, though)

Complete with late-night contrada drinking parties for weeks before! I was studying in Siena for 6 weeks and experienced the Palio near the end of my time there. Several friends and I stood in the hot Siena sun for several hours in the middle of the Piazza del Campo waiting for the start of the race. After a few false starts, a couple of horses down and one jockey off to the hospital, we found ourselves between the finish line and what turned out to be the winning contrada — we were afraid we would be literally trampled. Never experienced anything like it before or since.

(In the spirit of the Palio, though, the races would have to be ridden by hired-gun jockeys from California. And of course the Palio runs clockwise!)

Merritt’s my Dad and i feel like i have to add some clarification to the whole inner circle, outer circle debacle. Ladd circle is one way counter clockwise. He biked the inner circle, outer circle, middle circle, you name it. He started going close to the center, and as the day went on moved farther out to go more distance for less laps. Also Ladd circle doesn’t have enough traffic that him riding on the outside would cause a problem, thanks for your concern though:)

This sounds a lot like the Tour de Fatty that the Fat Cyclist puts on to raise money for cancer research. Participants either rider extreemely small loops or stationary cycles a 100 miles.

That would have been excellent– and he would have won his division, too.

I just had a wonderful evil idea: Bring back Critical Mass and make the whole route either Ladds Circle or the Joan of Arc Circle at 39th and Glisan – round and round. Bikes would never have to cede their right of way.

Technically, they’d not even be corking. It would be a very antagonistic way of making a point about bikes being traffic.

amazing! I wouldnt do it.

I believe he would have the right of way all the way around the perimeter of the circle. Not sure about your point on its reflection of cycling. Perhaps it would anger someone doing laps around the blocks connected to the circle, when they would see him pass every time they stop to turn right, or have to wait to turn right off the circle behind him. Boy what a pain!

The Fat Cyclist has an annual fundraising event he calls “100 Miles of Nowhere” where participants ride a century either on a trainer or rollers, or around a small course like this, or around a block…

@jonathan I am not trying to diminish anything that Raitt has done, but 64k views on a video is no where near what would be considered “viral”. One Million or two million, absolutely.

Cool. Seems to me there must be other places around town to do this, too. How about an Esplanade Loop — Steel to Hawthorn? In the rain, in the dark, so there’s minimal pedestrians? Or back and forth over the I-5 bridge from Hayden Island to Vancouver? Or a neighborhood greenway loop — skidmore/concord/failing/Michigan?

Not as slick as Ladds Circle, but minimal stopping.

Riding through Ladd’s a couple of days ago I did an extra lap.

PDX has a second velodrome, just a little shorter than Alpenrose. Around the inside the surface is nicely banked, making it delightful to scoot around at 12 miles/hour.

No worry about traction speed.

Maybe someone fitter than I could try for an hour record there.