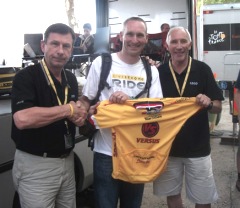 Remember Merritt Raitt? He’s the 50-year old cardiologist and professional road racing fan whose amateur film, Commuter Dreams — which is his daily Portland commute masterfully set to the narration of a Tour de France stage — became an Internet sensation back in March. Since our story, the film has been viewed over 52,000 times.

Last night, Merritt got in touch with us to share his amazing journey since the film debuted.

Merritt says he was worried that when he posted the film, Versus (the official TV network of the Tour de France) would bust him for using their audio. But it turns out they were thrilled and Phil Liggett (legendary Tour announcer) himself tweeted that he really loved the film. The Versus corporate folks also loved it and wanted Merritt’s permission to post the film on their website. He of course obliged and soon struck up a relationship with the Versus producers.

When Merritt mentioned to the Versus folks that his wife had arranged a trip to see the last week of the Tour in Paris, they invited Merritt to be their guest on the set at one of the stages. Here’s how the trip went:

“The short story is they came through on everything. I got a signed jersey, a big stack of Tour DVDs and we were treated as VIPs at the time trial on the last Saturday of the race. We met Phil, Paul, Craig, and Bob as well as the producer and others that make the show happen. Phil and Paul were great. They hung out with us talking about cycling, the movie, etc., and then let us be in the truck while they did the broadcast. It was the highlight of our trip. Everyone at Versus was so gracious.”

This weekend, Merritt’s VIP treatment will continue. Commuter Dreams wass selected as one of 12 films that will be shown at the Methow Valley Bike Film Festival.

That is awesome! I love listening to all of them during the tour, but Phil is just the best, especially his “Phil-isms” from over the years.

“And so, the first pedal has been turned in anger!”

I *NEVER* watch sports, but I’m glad I watched this!

Congrats on the yellow jersey Merritt! 😉

Way to go Merritt and way to go Versus!!! It is awesome that they didn’t simply make YouTube take the video down. Above and Beyond. There is some humanity left in the world.

Way to go Merritt! I hope you will still ride with us guys now that you are famous.

Brad: Yeah, it’s refreshing when a corporation “gets it” and they realize that videos and such that fans make can have a significant “guerrilla marketing” impact on their brand in a positive way.

Congratulations Merritt that is awesome and well deserved! The film was great!

This is truly a great video, glad it’s working out well for the creator. Great work, Merritt!

PS. Wow, can’t believe he is 50 in that photo. What a great advertisement for cycling – if I can look anywhere near that fit and healthy when I’m that age, I’ll be very happy!