“My next-door neighbor bought his house in 1963 after trading the extreme racism of Arkansas for the slightly less extreme racism of 60s Oregon and Portland. Three generations down from him used to come and regularly visit until he died at 96 a few years ago. I miss him…“

Welcome to the Comment of the Week, where we highlight good comments in order to inspire more of them. You can help us choose our next one by replying with “comment of the week” to any comment you think deserves recognition. Please note: These selections are not endorsements.

If you can step back a bit, the current controversy about PBOT’s traffic circle at Tillamook and NE 7th captures Portland in a nutshell. Say you had a friend who wondered what our city was like, Tempers flare around Tillamook Street tree removal as neighbors press for changes would go a long way toward describing Portland to them. Make sure they read the comments!

The 57 comments manage to express most of our simmering tensions, conflicts and biases. They’re hanging out for all to see.

Toward the bottom, one comment stood out to me because it was such a loving description of the neighborhood. That, and a good primer on how markets work. It is easy to get abstract, and to find in every controversy evidence of some larger principle, or the final blow in some long-running argument. Squaremen dropped all that, got specific and personal, and wrote a an even-toned response about why he likes where he lives.

The comment is long, I’ve selected only about half of it, but it is worth reading the whole thing. Here is part of what Squareman wrote:

Sometimes people don’t move. I’m in the neighborhood (7 blocks away) and there are an awful lot of homes on my block that have been owned by multiple generations of NE’ers, a significant portion of those are made up of black families and other POC. Please don’t erase them. And where they’re not multi-generational, they have been occupied for decades. My next-door neighbor bought his house in 1963 after trading the extreme racism of Arkansas for the slightly less extreme racism of 60s Oregon and Portland. Three generations down from him used to come and regularly visit until he died at 96 a few years ago. I miss him, as I used to get some seriously old first-hand Portland history. The house is currently still in the family.

Yes, the values of the homes are still very high in the neighborhood. The two houses to the south of me are owned by an elderly black couple who also live in another home nearby. They took advantage of a real estate investment plan the same way people complain about white people doing it. Their middle-aged daughter lives in one of the homes. I could never afford the house I own anymore if I were to buy it today, but I don’t intend on leaving. It’s what I consider my “forever” home unless something necessitates me changing that. Just because the value is high, doesn’t mean that homes are constantly trading hands. As far as home turnover goes, I usually see the same collection of houses in my neighborhood come and go on the market (i.e., house flippers trading up over and over).

Yes, the values of the homes are still very high in the neighborhood…They took advantage of a real estate investment plan…

With all due respect, wealthy people buying homes as an “investment plan” was one of the major causes of gentrification and displacement in NE Portland. And while flippers may be amoral speculators, they did not force wealthy people to displace disproportionately black long-time residents.

Just because the value is high, doesn’t mean that homes are constantly trading hands. 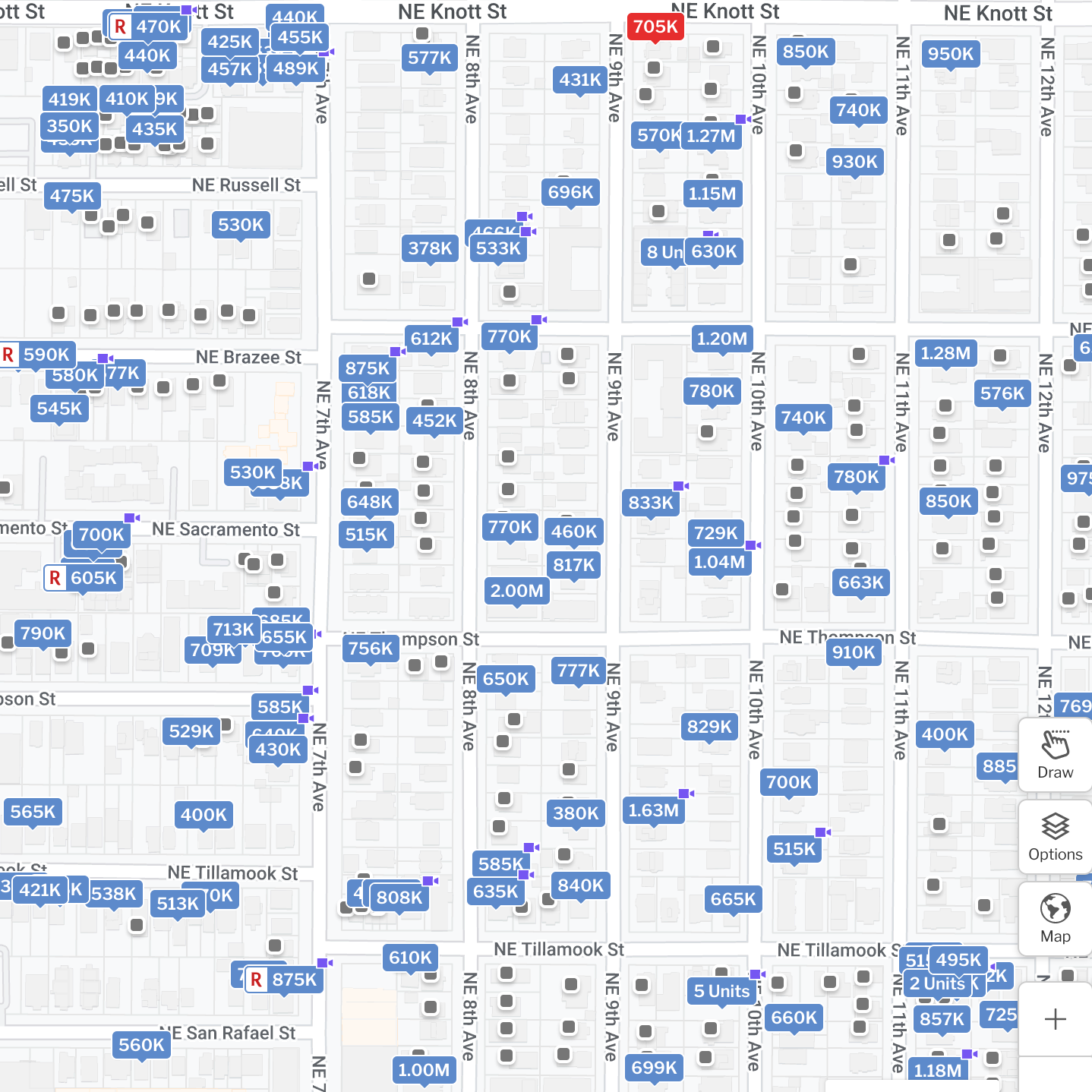 Home sales adjacent to NE 7th near Tillamook in the past 5 years according to Redfin (a significant underestimate given that Redfin does not capture all sales).

I agree, but you’re hating on the player for playing the systemic game they were forced to play. If real estate investment is good for someone’s retirement strategy, why wouldn’t they take advantage of that? Nearly no employer offers pensions anymore. 401Ks were supposed to be the gravy on top of pensions (as per the law’s author), but employers killed pensions after the 401K’s creation. The stock market was not supposed to be for average joes and I certainly have always been anxious about it). Any time some new financial program comes along to help lower-income people do better for retirement, it gets abused and corrupted by those that already have money. That needs to change. Incentive programs need to be for the people who really need the incentives, not those who’ve already “made it” – whether it’s getting their retirement nest egg going, or buying their first home. But, I guess that’s the entire crux of what’s wrong with American capitalism without proper protective regulation for people over profits. … Said the preacher to the choir.

Like I said later in the original comment, what needs to change are the incentives that were supposed to be for first-time home buyers, to give them more purchasing power, but have resulted in ballooning property values that end out ironically shutting out first-time buyers. Those tax breaks are still there for every home buyer who is “trading up,” using the equity in their old home as the downpayment on the new one – the mortgage interest deduction should definitely go away for anything but for first-home purchases. That’s not the only thing that should be reformed in real estate regulation, but I see it as one of the major reasons that home prices balloon. Beyond that, I don’t even know what else needs to change, but something clearly must. As I said, I could never afford to buy in this neighborhood again either. I just barely did when I did over a decade ago (and it was mainly because of a single windfall year that helped me scrape together that downpayment).

“Good for my portfolio” is not the same as “forced to play”. I don’t invest in REITs because I think they contribute to bad outcomes in communities I care about, despite the financial advantages they offer.

And don’t forget that (thanks to Trump), the mortgage interest tax break is much less valuable than it used to be, to the point that for many people it has effectively been repealed. Any increase in housing cost due to that tax break were long ago incorporated into prices.

I would never invest in a REIT either. You’re conflating individual investment with institutional investment. Definitely, REITs contribute to the bubble.

Regarding Trump devaluing deductions: yes, he did, for the middle class. Institutional investors will still take those deductions. So what he did was hurt individual families more than corporate interests. Sounds familiar.

Every year the realtor we worked with sends me a letter around the anniversary of house purchase to assure me that our “investment” is doing well. It arrived a couple days ago, so I figure it is a sign from the God of markets that I am supposed to respond to you.

But first, I eyeballed my neighborhood through your Redfin filter, and we have many more blue flags than the map above. But that’s just for five years. I’ve been in this house a little over 20 years and we have been here longer than any of my neighbors. Every house but one has turned over in the past 20 years, some several times. A lot different from the several multi-generation houses Square describes.

Now for what my realtor says. The average house price in the Portland Metro area is $620,900, up 9.4% from last year. I’d say that the area in the map above has about average house values. She goes on to say that ’20 through early ’22 were “frenzied” years, huge numbers of sales. Outlier years.

Markets are markets, and reflect a balance between fear and greed. They are good at some things, and not good at many others. The government needs to build high-density subsidized housing. I agree. But you are not going to get a pack of market participants to ignore money for very long — buyers or sellers.

Allowing housing production/selling to be controlled by a financialized market that has captured regulators was a choice. I hope that some day the USA chooses to view housing as a social good (e.g like healthcare or education), not an “investment”.

I share the frustration. We’ve opened up our home to at least a dozen friends and families over the years to stay with us over extended periods while they look for a place to live and/or work. We’ve done it because we’ve been in a position to help. Many of these people would not have been able to stay in Portland had we not. I do see it as a community thing. The whole expected notion of property (land) ownership is so primally tied to American colonialism. Especially in the age of the global warming crisis, with a growing population, land use of any kind has a significant effect on that shared commons.

Squareman’s comments are always worth reading!

None of this changes the fact that this is about NIMBYs arguing about something that has very little bearing on anything other than what they see out the front window of their overpriced homes.

BikePortland would do well do spend more effort on equity issues in East Portland, where many of us still don’t have sidewalks, crosswalks, bike lanes or frequent bus service. It’s no secret that this blog pays lip service the wealthy inner Portland residents first. And it’s always been that way.

I wouldn’t even know about what was going on in outer Portland regarding transportation were it not for Bike Portland’s coverage. The problem is the city and county governments, not Bike Portland. I certainly think most of the outer annexed townships were screwed in the deals, and I admire Maywood Park for giving a big fat middle finger to Portland when they tried to annex it (but then we’re right back into a more well-to-do neighborhood with money, time, and political resources there again). I’m hoping the City Charter Reform bill passes and moves the needle on that.

Why are they NIMBYs?