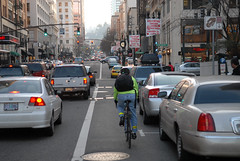 In what researchers call the first study ever to examine the relationship between traffic-related air pollution exposures and cardiac health among people who ride bikes, a study published last month found that cycling near heavy traffic “may have a significant impact” on heart health.

The research, Traffic-Related Air Pollution and Acute Changes in Heart Rate Variability and Respiratory Function in Urban Cyclists, was done in Ottawa by Canadian researchers and published in the journal Environmental Health Perspectives. 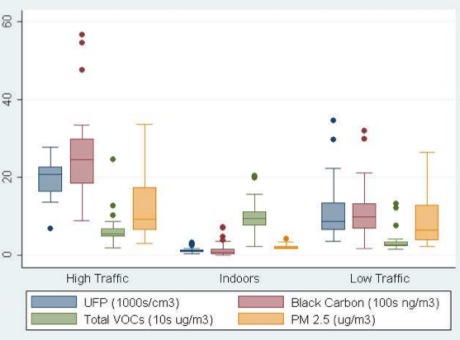 Researchers monitored 42 healthy adults and compared their vital signs after cycling for one hour on high and low-traffic routes as well as indoors. The results showed irregularities in cardiac function, also known as heart rate variability (HRV), a condition that has been shown to be a predictor of mortality following heart attacks.

“Our findings suggest,” the researchers concluded, “that short-term exposure to traffic may have a significant impact on cardiac autonomic function in healthy adults.”

While they found a heightened risk to heart health when cycling near tailpipes, researchers noted that, “the clinical implications of this relationship are unclear as the health benefits of cycling might outweigh any potential negative impact.”

Interestingly, the study authors recommend that people choose bikeways that are away from high-traffic areas:

“… our findings suggest that when possible it may be prudent to select cycling routes that reduce exposure to traffic and/or to avoid cycling outdoors or exercise indoors on days with elevated air pollution levels. In addition, the planning of new cycling routes/bicycle paths in urban areas should aim to minimize time spent in high-traffic areas in order to reduce exposures of recreational riders (e.g. elderly) who may be more susceptible to the acute cardiovascular health effects of traffic-related air pollution.”

That portion of the findings reminds me of a recent study at the Department of Environmental Science at Portland State University. As we reported last fall, that study concluded that a bikeway separated from motor vehicle traffic by even a few feet may be, “more protective for cyclists than a traditional bicycle lane in terms of lowering exposure concentrations of ultrafine particles.”

The Canadian study should also give added momentum to planners who are pushing low-traffic bikeways like Portland’s Neighborhood Greenways as alternatives to biking on main streets.

I’ve been cycling through heavy traffic since moving to the San Francisco Bay Area five years ago, and I can almost feel the grit and nastiness in my lungs and windpipe.

guys traffic fumes do contain loads of heavy metals, this tin that your lungs do not stop them, they go straight into your blood ! So exercising and inhaling heavy metals…..

take a look at this
http://www.nutramed.com/environment/carschemicals.htm

I wonder if that’s why I get a runny nose every time I ride? Like clockwork, year around. It’s annoying.

I’ve often wondered why joggers “jog for their health” in or near busy roads. It’s not like they *need* to be there.

I’ve often wondered why joggers jog in the bike lane when there’s often a perfectly good jogging track or footpath right next to the road.

asphalt is softer than cement–> better on the knees

I can almost see the next cycling apparatus: a pollution filtration mask–in an array of fashionable colors!

Get on it, Showers Pass! (Fumes Pass?)

When I was in London, practically every other cyclist I saw had a respirator on. They were mostly some shade of dark gray (grey) or black, with white filter units. It did not look comfortable.

I wish they’d also included information about the impacts to people who drive along the same routes.

When I worked at DEQ in Air Quality I asked them about it – they said they hadn’t done specific studies on cyclists but they’ve compared point meters with inside car air quality and what they found was that there are big spikes and troughs in air quality outside but that inside a car because the air is collected and takes a little while to dissipate again, the level of actual exposure is probably pretty similar.

Depending on the pollutant lower but longer exposure may be less harmful than higher but shorter and vice versa.

We could fix all of this with one simple regulation: all motorvehicles sold in the united states must be engineered so that the tailpipe empties directly into the car, preferably aimed at the the driver’s face 😉

or at least point the exhaust out the rear left side…

One of the arguments against child trailers is that they are directly in line with exhaust pipes, especially if the pipes are aimed to the right.

I was just thinking this same thing the other day while waiting behind an SUV with clouds of exhaust billowing out of its right-side tailpipe and drifting across the rest of the lane. If that pipe had been on the left side, I wouldn’t have been directly inhaling any of it.

The exhaust problem is one reason to welcome the advent of electric vehicles.

mikeybikey
so that the tailpipe empties directly into the car, preferably aimed at the the driver’s face 😉

Dahon/Biologic has a pollution mask intended for bike riders in urban environments: http://www.thinkbiologic.com/products/pollution-mask

This is a solid study that discusses the dangers of living too close to high traffic routes.
http://www.ehjournal.net/content/6/1/23

The poor get screwed again. Noise is not the only reason neighborhood quality decreases in the blocks surrounding major highways.

One graph shows ultrafine particles are especially bad within 50 meters downwind of freeways. Causes some concern about paths that travel along freeways – such locations are easier to build in, but definitely create health concerns.
http://www.ehjournal.net/content/6/1/23/figure/F1

How might this type of study inform a decision to invest in the Sullivan’s Gulch Trail versus extension and enhancement of nearby East/West neighborhood greenways in NE Portland like Tillamook-Hancock or Couch/Everett/Davis?

Wasn’t there also a Dutch study published a couple of years ago that stated that exposure to pollutants were stronger for people in cars than it was for people on bikes when considering road users on the same route?

Additionally, my health has never been better since starting commuting by bike four years ago. In fact, I’m healthier now at 42 than I was a in my late twenties. I’ll continue to ride, despite the “exposure”.

Granted while car-light routes are more desirable, there’s no escaping traffic as I get closer to downtown.

Turns out it was an Australian study, but yes, exposure to pollutants were higher for car drivers and bus riders than they were for walkers or cyclists. People on trains had the lowest exposure.

So what this study should really say is: exposure to high motor-vehicle traffic, no matter your mode of travel, increases risk to your heart health, rather than spread the FUD about riding bikes in traffic.

…another reason I get confused seeing cyclists on Hawthorne, Burnside, Sandy, etc. when there are better (healthier?!?) options just a few blocks away.

I think that depends a little on which of these streets we’re talking about, and where. Sure, Sandy is busy and feels like bathing in exhaust, but the lanes are wide and it’s a very quick route if it goes where you’re headed. Hawthorne is no fun for anyone, but if you’re going to a business on Hawthorne, you likely will need to ride at least a block or two on it, coming or going. Burnside is a Jekyll and Hyde, with bike lanes in the couplet, then no bike lanes, then bike lanes again at 71st. In that long, mean stretch in the middle, the bike route of Ankeny + Davis / Everett is much, much more pleasant (and low on the tailpipe emissions).

John Lascurettes
So what this study should really say is: exposure to high motor-vehicle traffic, no matter your mode of travel, increases risk to your heart health, rather than spread the FUD about riding bikes in traffic.
The real message behind the real message: Get more cars off the road!

Well said, John!!
That’s what I take away from this as well.

I did enjoy this line from the recent study;
“…it may be prudent to select cycling routes that reduce exposure to traffic…”
No “may be” about it- it is ALWAYS prudent to do so! “Heart health” is only one of many reasons.

Let’s see a head-to-head comparison of the heart risk of a sedentary lifestyle vs huffing traffic fumes while cycling. I’m certain we’re better off riding (if I wasn’t, I’d’ve driven to work today).

I get headaches and my thoat is killing me right now,
smog? yes..

kerry
Let’s see a head-to-head comparison of the heart risk of a sedentary lifestyle vs huffing traffic fumes while cycling. I’m certain we’re better off riding (if I wasn’t, I’d’ve driven to work today).

British Medical Assoication report showed that the health benefits of cycling as little as 4 miles/day outweighed increased risk of accidental death by 20:1

As others have commented, the study would have more validity is they had doen a cross-section of all road users.

Funny, when I saw the headline, I immediately thought of the stress and pressure to go faster that I feel comfortable going when bicycling in traffic lanes, when I’m forced to take the lane. I don’t think I’ve felt anywhere close to heart attack levels, but I’ve definitely gotten my heart rate up trying to “keep up” in fast moving traffic.

o.0 guess we die from something anyway…

Unless a car has some fancy sub-micron cabin air filtration system, I’m pretty sure motorists are breathing in the same crap.

Not only that, but more concentrated in the cabin of a car. Both an Australian and Netherlands study said as much.

Editz
Unless a car has some fancy sub-micron cabin air filtration system, I’m pretty sure motorists are breathing in the same crap.

yup true.. but they love the car and the power it gives them.. LOL

When I lived in London in the early 90s, the bike messengers wore filtering face masks. Yes it made them look badass. But they knew. They knew.

Those black cabs were probably lousy with emissions.

come on.. its stuff like this that makes me shake my head.. how many cities have you biked in?

With this information I would push for the N Williams bikeway improvements to be moved over a block to a street used by less cars for the health benifits of the riders. Why would anyone want to suck in all that car exhaust when you are already huffing and puffing? better done on a quieter street.

I just saw a story on KGW about this. They pointed out that the research applies to any exercise in a polluted environment, so it isn’t really a biking problem. They also interviewed a local cardiologist who downplayed the risk. Finally, they mention that green “bike boxes” move cyclists away from cars’ tailpipes and thus spare us from some of the exposure.

The study was probably funded by the same consortium of car dealers who hire criminals to mug people waiting for Max, so as to discourage mass transit use.