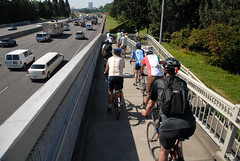 Metro plan will identify major
bikeways and the money to
build them.
(Photo © J. Maus)

Metro has earned state grant to develop a “Regional Active Transportation Plan.” According to project manager Lake McTighe, the plan will guide the development of our regional walking and biking network and, “Identify priorities and a funding strategy to get those priority projects and corridors built.”

The grant comes from the Oregon Department of Transportation’s (ODOT) Transportation Growth Management program. Metro requested $280,000 and will combine that amount with $56,000 in Metro matching funds.

Regional level parkways, with clear connections to the public transportation system, will provide a network that will encourage bicycling and walking by providing safe, green and efficient ways to get around without a car.“

Currently the RTP lacks an agreed upon implementation strategy, so the region’s investment in bicycling and walking facilities, “has been piecemeal and opportunistic, resulting in a less-than-seamless network and prohibiting safe and efficient non-motorized travel for all,” says the proposal.

“It means that we will be a lot closer to completing a well defined and well spaced network of regional bicycle highways that will connect cities, towns, main streets, employment areas, schools and universities and shopping districts across the region.”
— Lake McTighe, Metro

Lining up projects is important for Metro if they want to have any hope of achieving their goal of tripling the walking, biking and transit mode share by 2035. The way state and federal funding works, projects that have already been identified through a public process and that have broad regional consensus stand a much better chance of being funded. With the work Metro will do through this grant, they’ll bring our regional bike network closer to “shovel-ready” status.

In addition to a prioritized project list, this process will help identify funding sources and it could make substantive policy changes and recommendations. I could envision this process exploring an active transportation bond measure and/or perhaps making the new NACTO Urban Bikeway Design Guide our region’s official blueprint for the design of bikeways.

“A bicycling and walking plan for the region is important on so many levels,” said McTighe via email today, citing the myriad benefits that would come with biking and walking.

But it won’t come cheap. Metro’s “Regional Bike Parkway” concept would make connected routes across the region, taking people on foot and bike across major highways and other barriers. “Substantial amounts of funding is needed,” McTighe acknowledges; but she adds it’s absolutely necessary in order to, “provide the safety and quality of experience that will making walking and riding a bike the most convenient way to get around.”

McTighe adds that this plan will bring our region “much closer” to building out an integrated system for biking, walking and accessing transit. “It means that we will be a lot closer to completing a well defined and well spaced network of regional bicycle highways that will connect cities, towns, main streets, employment areas, schools and universities and shopping districts across the region.”

Metro will release an initial survey in September on biking and walking through their Opt In opinion panel as one way to receive input.

McTighe says the planning process which will start this fall and the plan is expected to be officially adopted by Metro Council in early 2013. Metro is expected to make a formal announcement about the grant later this week.

TGM grants are often worth watching, but this is one of the more exciting ones I’ve seem come through the pipeline. Most regional MPOs/COGs don’t see this level of coordination as their job or their problem; we’re lucky to live in a region where Metro is stepping up to lead and coordinate trail *and* on-street biking/walking investments.

Hate to sound cynical, but why is it so much easier to get money for planning than for actually creating bicycling infrastructure? City of Portland has a great bike plan but no money to actually implement it