Famed filmmaker Casey Neistat’s latest video creatively tackles the issue of riding in bike lanes in NYC (and getting ticketed for it). It’s so well done that the video has exploded on the web. Watch it below…

After getting a ticket for not riding in the bike lane Neistat goes on a hilarious, stunt-filled video rant to point out that the bike lane is often obstructed by any number of hazards that make riding in it impossible and dangerous. “Ticket the bike lane blockers, not the bikers” is the mantra.

The video has spread like Lance Armstrong doping allegations over the past day or so and is headed for 1 million views on YouTube (and nearly that many emails from people wondering if I’d seen it). 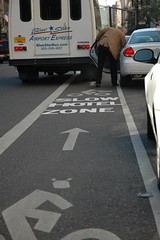 While things aren’t as bad here in Portland as they are portrayed to be in NYC, the problem is real. Not only do we have a state law that says if a bike lane is present you must ride in it, but there are several places around Portland where cars routinely block the bike lane (SW Broadway comes to mind).

If you’d like to brush up on Oregon bike lane laws, see our Bike Law 101 column from last month. For more discussion and background on this issue, see “Are bike lanes a haven or a hazard?” a story we published back in 2006.

In the meantime, watch out for obstacles — and if a cop tries to ticket you for avoiding them, nicely explain to him/her that it’s perfectly legal to leave the bike lane to avoid hazards. Or, just pull out your phone and show them this video.

This video is made of Awesome.

Or just start crashing into stuff to send a message like the filmmaker did.

…and kids do not try this at home…try it only in the public right of way.

The explicit exemption in law for hazards, including “debris”, makes bike lanes defacto optional, as *all* bike lanes collect debris relative to the main lanes where motor vehicles run.

This video is very funny and sends the point home. I encounter obstacles in the bike lane everyday from gravel, tree branches, PSU students standing in the middle of the cycle track on Broadway, TRIMET buses, double parked cars, and the list goes on.

I’ve come close to smashing into pedestrians multiple times in the past year. In each case the pedestrian was totally oblivious and just stepped into my path!

Although the B-way cycletrack is supposedly advisory, motorists do not know this, and many of them become very irate when they see cyclists in the lane. I have been cussed at more often on upper B-way than anywhere else in PDX.

Outstanding.
I too almost ran into a speed trap van on Hwy 10 last night, parked halfway in the bike lane. I don’t get how the Police can think parking in the bikelane is optional! As the video says they’re supposed to be the one policing the bike lane!!!

This isn’t just a one-off. Had to execute a scary merge into high-speed traffic Tuesday or Wednesday evening going down the hill just west of Hillsdale.

The speed enforcement is absolutely needed and appreciated on Beaverton-Hillsdale Hwy – but please, don’t park the van in the bike lane!

Pretty common; but ‘it’s official business’ is the reasoning. Doesn’t make it right but the speed trap more than warrants it there.

Try to pop the camera next time – he sets the warning sign back on the first curve to give you a sprinters chance! You can get pretty close…

Will a speed trap van be triggered by a cyclist? I guess they have a similar “radar shape” (I just made that up) to a motorcyclist.

Video is funny as all get out – unfortunately, viral on YouTube will do nothing for the ticketer or future ticketees.

Great video! Rough way to make your point tho…

LOL classic. I carry this tube on my cell 🙂

Be sure to report any cars blocking bike lanes to the police. Even cop cars!

I love this video so much. It keeps amazing me how completely believably oblivious he is as he cruises along. So good.

Great stuff, the NYC cops can’t claim that bikes are pipe bombs anymore, they can’t harrass bikes as they used to anymore due to every cell phone is a video camera, now this.

That STUPID “Hotel Zone’ needs to be torn up and taken out. So tired of being shoved out into traffic because drivers and taxis can’t parallel park worth crap!

I consider it a non-issue here, at least in terms of risking a ticket. Oregon law is pretty broad in granting exemptions from the requirement to be in the bike lane if it’s not safe to be in.

Where is this guy’s helmet? Crazy to pull stunts off like that or even ride in NYC without one… great idea to raise awareness though.