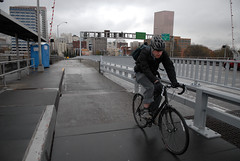 Multnomah County announced yesterday that the multi-use path on the Morrison Bridge will close to all traffic beginning Monday (6/13) and the multi-use path that serves both directions of bike traffic will be closed until mid-September of this year.

The closure is for a $4.2 million construction project that will replace the metal lift span with a solid deck surface that will improve traction and safety for motor vehicles. The project is expected to last until late this year. Below is the breakdown of how traffic will be impacted:

This closure comes amid several others in the area that have impacted bicycle traffic, including a segment of the Esplanade near OMSI (for TriMet bridge construction), the floating portion of the Esplanade (due to high water), and Waterfront Park just south of the Steel Bridge (due to the Rose Festival).

I asked county spokesperson Mike Pullen for more details on how the Morrison closure will impact the multi-use path (which serves both directions of bike travel).

Pullen says people should use the Hawthorne and Burnside bridges as alternate routes.

“We regret the inconvenience to bicyclists and pedestrians,” Pullen wrote to us via email, “especially in the short term when the Esplanade path is closed north of the Morrison due to high water.”

Really not making it easy to get to work in NW from SE Portland.

just means the hawthorne will be even more crowded now that the esplanade (via steel) is closed and now the morrison.

there’s way too much construction and closures impacting Willamette River crossings and associated paths and routes; I realize that the Esplanade floating bridge closure was unplanned, but doesn’t anyone coordinate the planned closures between the various agencies involved?

This is my daily route! What a pain. I guess it will be the Burnside. The only problem is that I have to come up 12th which is not a nice street. But what else is there?

Drop down to 7th anywhere between Division and Couch. Much better than 12th

Yeah, take 7th if you are coming up from SE.

seriously? couldn’t this have been coordinated to happen at the same time that they did all the work to install the path!?!

I was wondering the same thing. Has it even been opened for as long as it had been previously closed? This is my go-to bridge for pedestrian crossing, I’m not happy to hear it will be unavailable again during the nice walking weather.

“The bridge’s north sidewalk will remain open when the south path is closed.” Looks like we can go back to using the North sidewalk again for the time being. I hope Mr. Pullen is planning on providing detour route signs on both ends of the bridge for folks on bicycles or walking.

or just do like what is shown in the masthead picture right now… 🙂 a little ironic to see that sharing the page with this article.

Any plans by the county to reuse this bridge decking for a future pedestrian bridge or trail boardwalk?

I hope the county (with PBoTs help) has worked hard on the work zone plan and signed/ stenciled bike detour route.

Perhaps a better question is … Has an independent traffic engineer looked over the county’s workzone plan to see if it is truly necessary to fully close the trail side for this period of time? (BTA are you interested?)

The path closure request by the contractor could be just a simple issue of expediency for them (self imposed) and not true need. Is it a best practice? Is it as simple as either relocating a construction trailer/ storage area, protecting the path from overhead materials movement, have a flagger at the trailhead during the commute peak, etc.

This is one of the short comings of the City not being in control of such vital infrastructure within it’s heart of the city. (Sam – any update on your efforts to take over any of the bridges?)

I expect that the bridge maintenance was scheduled long ago and that delaying it would cause a significant cost penalty.

That may be. But why is the public finding out about this three days before the closure? Not much opportunity to ask questions and give input back when changes might have been feasible.

Simply the fact that the closure is only being announced three days in advance demonstrates the utter lack of understanding that the county has of how people actually use bike infrastructure for transportation.

Yikes, more closures around the downtown waterfront. Seems like regardless of whether I’m on two wheels or four, there’s no way to avoid having my life significantly disrupted by construction this year.

I suppose this will affect the bridge Pedal?

I was really happy when the Morrison opened with the multi use path and use it everyday, literally. Esp during the summer, the hawthorne is just too dangerous.

I guess I’ll have no qualms about taking the lane across now. I will miss cycling over the metal grating, however; that was always a fun view down to the river. At least there’s still the Hawthorne and the Bridge of the Gods (at 135′ above the Columbia, this is not for the acrophobic).

gee thats real smart to remove the metal grating so cars and trucks can go even faster and not have to exercise any caution on this bridge. traffic engineers are experts at making roads more dangerous while claiming their fixes will improve safety. forgiving roads is a complete farce. a simple speed limit sign to actually get traffic to slow down on the grating would be more effective and a hell of a lot cheaper.

Meanwhile, in Oklahoma, non-freeway portions of OK 66 becomes the state’s first state cycleway, with dedicated cycleways to be built to close the gaps. Map updated to reflect the construction in both cases.

Jonathan, Do you have an update on this project? It’s well past the mid-September completion date mentioned in your article above. Someone compared the closing of Main Street for Occupy Portland to this and it made me think of the article. This affects MANY people’s daily commute and mid day transportation into the west side.

They had issues with the construction company and they halted work on it for a few months. Haven’t heard an update but I see people workin on it again so that is hopefully