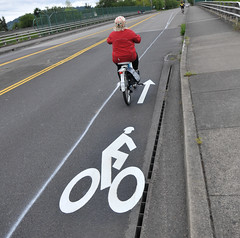 A woman enjoys the newly designated bike-only
space on E Burnside over I-205.
(Photo © J. Maus)

The City of Portland has installed new bike lanes on the East Burnside overpass of I-205. The bike lanes had previously dropped on either side of the overpass (at NE 94th and 97th).

The new lanes take advantage of a wide shoulder and PBOT has even a striped a buffered section in the center of the overpass. These new bike lanes have added importance because this is where the I-205 multi-use path jogs from one side of the interstate to the other.

“It’s another little victory for biking to and from outer northeast Portland.”
— Reader Kit W.

Shetha Nolke lives in Ladds Addition and rides to Gresham for work over the Burnside Bridge. After riding in the new bike lane, she shared this impression:

“Westbound [on Burnside over I-205] is particularly tricky because you’re crossing MAX tracks while being squeezed towards car traffic. I used to take the sidewalk here until I became a more confident rider. The sidewalk across the bridge is wide and not heavily travelled so I’m guessing folks (especially those following the I-205 path) will still use it… Pretty cool I think.” 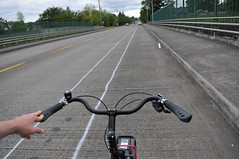 The current practice for riding on the I-205 path is to have both directions of bike traffic mix with walking traffic on the 10-foot wide sidewalk on the south side of the overpass. Since bikes are vehicles that belong on the roadway, it’d be preferable to direct bicycle traffic onto these new lanes. However, the connection from the westbound bike lane onto southbound I-205 path isn’t possible unless you hop a tall curb or make a u-turn at NE 94th. Perhaps PBOT will add some signage and cut a curb ramp into the south sidewalk to make this connection even better.

[UPDATE: If you want PBOT to make a curb ramp on the south sidewalk where the I-205 path comes out, please email jeff[dot]smith@portlandoregon[dot]gov.]

Reader Kit W. noticed the new bike lane on his evening ride home. “It brought a smile to my face,” he said. Kit feels the new bike lanes will make this stretch of road easier to navigate. “This place has always been a mystery as to where bikes should be (on the sidewalk or on the road… It’s another little victory for biking to and from outer northeast Portland.”

This project was paid for out of PBOT’s “Missing Link” fund, a $50,000 pot set aside within General Transportation Revenue for small projects.

“However, the connection from the westbound bike lane onto southbound I-205 path isn’t possible unless you hop a tall curb or make a u-turn at NE 94th. Perhaps PBOT will add some signage and cut a curb ramp into the south sidewalk to make this connection even better.”

YES. THIS. i thought i was -supposed- to stay on the sidewalk through here because of this configuration!

Me too, no way to connect with the curb height. This is a super dangerous area to cross the curving max rails. I have bit it hard here in the rain and you end up sprawled on the tracks.

Very nice to see. I visited Portland in April and rode the 205 corridor, and found that sidewalk-riding section very unusual given the excellent quality of the rest of the path.

I do remember though there being one more overpass farther north than this along the I205 path that required an uncomfortable sidewalk ride as well.

Saw the lines Friday… OK… it works! Maybe just me but I never felt particularly threatened on the road over the overpass in the road- ton of room. NEVER used the sidewalk either direction – unless connecting with the 205 path. Even with a ramp I think there are too many danger points and blind spots to ride the sidewalk- riders coming off the path, cars looking to turn onto Burnside from the side street, TriMet bus stops, etc.

So take the road, with the new lines, even better, Yay!

Unless they cut a curb ramp, I’m on the no blind spots, no danger points , wide half block sidewalk.
Or staying westbound on the newly marked lane and pulling a U turn to cross over. This needs the curb ramp.

Never had issues on this bridge, but having the buffered lanes will be a nice reminder for drivers. I’ve never fallen crossing the MAX tracks westbound, but it’s definitely an annoyance. I occasionally stay on the sidewalk because the car traffic is so heavy and I don’t want to dart out in front of it.

I ride that section of Burnside at least twice a week and have always gotten plenty of room from cars because the lanes are pretty wide. I have noticed a lot of speeding, though and the 205 path transitions are vague.

I’m sticking to the sidewalk on this one. The 205 path is part of my daily commute. The curb is too high and the u-turn potentially more dangerous than the max rails. If there were a curbside entrance available, ODOT would need to put in some signage or road markings on Burnside westbound designating a turning lane for cyclists.

I noticed these last week. It’s still a little confusing given the intersection of the street/sidewalk/bike lane/MAX tracks. Are cyclists supposed to wait for a green light when turning right (east) onto Burnside? Even though it seemed (until this bike lane showed up) that we were to take the wide sidewalk, like pedestrians, who don’t have to wait for a green light to stay on the sidewalk.

I agree with many of the sentiments here. Unless the curb issue is dealt with it’s not that much of a benefit going north-south on the 205 path. Regardless, it’s always a plus to have more lines/signage/whatever just so cars will notice more, especially for those not on the 205 path.

I agree with much of what’s said here, in the article and comments. I was surprised there were no visual indicators to motor vehicles that bicycles should be on the roadway on Burnside here. I also agree that the Glisan Crossing to the I205 path is even more problematic, in that the sidewalk riding portion is awkward and dangerous. It puts cars and bikes in the right hook position as the crosswalk signals and cars find a break in traffic to make a right turn on red.

I appreciate this new striping.

just to be clear, the bike lane addition is meant to serve east-west cyclists continuing on Burnside. For north-south I-205 path users, the wide sidewalk on the south side of the bridge is the intended (and most convenient) route. Additional wayfinding markings will be added to the path to help make this clear.

Chris I
Reply to  jeff smith

A curb ramp on the southwest side of the bridge connecting to the path would be beneficial for riders coming east or west on Burnside trying to get to the path.

I support the curb ramp, too. Give the less than confident an option. (It may not be their best option, but it’s better to give choices.)

I also support curb cut. Last time I needed to use the SB I-205 path from Burnside, I was traveling WB on Burnside from 102nd. Taking the sidewalk wasn’t a good option since I was preoccupied with crossing the MAX tracks safely. It had been years since I lived in that area, and I’d forgotten there was no ramp. The intersection is confusing and non-intuitive regardless of intended movement, and I think it would benefit greatly from a curb ramp there, regardless of the preferred route.

I like that they have an arrow showing bikes which way to go in that lane. A lot of people seem to think that those bike lanes are multi directional