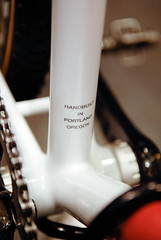 This April, the work of Oregon’s burgeoning crop of bicycle builders will be on display at the Portland International Airport.

The exhibit will be managed by the Regional Arts and Culture Council (RACC) and will run for six months (from April through September) and will feature a range of bikes in a 40-foot display in the airport’s E Concourse.

Coordinator of the installation, Austin Ramsland (Sweetpea Bicycles), says he already has submissions from 18 different Oregon builders. Once the submissions are complete, a committee of framebuilders and artists formed by the (RACC) will select the bikes to be displayed.

The RACC manages the airport exhibit space under their artOBJECTS public art program. 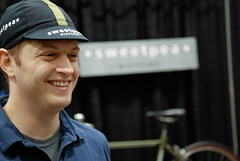 According to Ramsland, conversations about this idea began long before the recent North American Handmade Bicycle Show stormed into Portland tallying a record 7,100 attendees over three days.

Ramsland says the exhibit came about through a coordinated effort between the Portland Development Commission (PDC, who has identified bicycles as a target industry), the RACC, and the Port of Portland (who owns and operates the airport), “People at the Port, Jennifer Nolfi at the PDC, and the folks at the RACC are all excited about this exhibit and have supported it all along.”

Back in November, Portland hosted the Oregon Handmade Bicycle Show which was also a raging success.

Ramsland estimates that tens of thousands of people will see this exhibit as they enter Portland, “This is a rare opportunity to have our work shown in a beautiful venue to a lot of people…this is going to be a really cool deal.”

If you build bicycles in Oregon and would like to be a part of this exhibit, send a picture of the bike and a brief description of it to Austin Ramsland at austin [at] sweetpeabicycles [dot] com.

NOTE: Since the exhibit is located behind security gates, only ticketed passengers are able to view it. You cannot ride out to the airport to see it.

Awesome idea! And timely in light of the previous article about senators questioning the advisibility of including bike and pedestrian facilities in the new Columbia bridge design. Of course we need to be able to ride safely from Portland to Vancouver – forward this to senators Starr and Johnson. we\’re the center of the bike universe!

It would be cool if some builders could come up an airplane inspired bike. Maybe take some design cue from the racers of the 30s and 40s.

Oooh, I can\’t wait! I love the idea of every visitor who arrives by plane getting to see our best and finest handmade bicycles. Maybe I\’ll try to talk my parents into visiting just so they can see them…

…and/or tie in to the fact that the Wright Brothers\’ earlier gig was bikes.

Cool! Although in the E-concourse, it will only be \”mandatory viewing\” for United and international passengers. Maybe it could be moved over to the A-B-C concourse after a while?

Everybody knows the Wright Bros. connection, but how many know that Rene Herse was an aircraft parts fabricator before he was a bike maker?

So much for my lobbying efforts to have them featured at my place.

Thanks, Austin. You rock!

I hope they have an inclusion of garage bikes, i.e. built by the rest of us (and looks like it). Tallbikes, mimibikes, whatever, variety is the spice!

One of my tallbikes will be there. Thanks Austin!

Cool, now I look at something besides airplanes during my lunch break

Thanks for all the love folks, but honestly, I\’m just the middleman here: RACC, the PDC, and especially the Port of Portland came up with the concept and asked that the framebuilders show their work.

The framebuilding community responded, and I think it is going to be a really fantastic display.

Wow…I like to go to the airport to see the Deborah Butterfield horses…now I can see my other favorite \”art rides\” what a coup!! Can\’t wait to take a trip..and I don;t even like traveling!!

Cool. Will the Port allow the airline clerks to ride the featured bikes around the airport on their daily rounds?

I was recently in the Frankfurt airport and they use bikes extensively there.

fly to live. live to ride. ride to fly.

Do you have to buy a ticket to somewhere to see this exhibit or can anyone just ride their bike down to the airport (which I often do, just to watch the planes) and walk inside and view it?

\”Do you have to buy a ticket to somewhere to see this exhibit or can anyone just ride their bike down to the airport…and walk inside and view it?\”

Unfortunately the exhibit will be behind the security gates, so only ticketed passengers can view it.

That\’s a shame that you have to buy a ticket to somewhere to see this exhibit. How many cyclists will be flying in April? Will there be any chance for anybody besides the jet set to be able to see it some other time and place?

Expensive ticket to that show!

I like the idea of the \”jet set\” seeing bikes. Cyclists see bikes all the time. Introducing people who may not think of bikes as objects of art/fine engineering can only result in more acceptance of bikes and more bikes on the road. Maybe instead of renting a car they will rent or buy a bike instead.