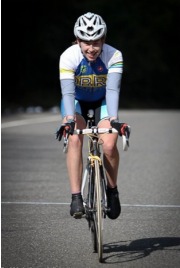 Oregon’s bike racing community is rallying around one of its rising stars, who sustained a serious injury following a crash at a race earlier this month.

21-year old Portland native Leia Tyrrell is recovering from a severe brain injury at her parent’s home in Sellwood after crashing during the criterium stage of the Cherry Blossom Cycling Classic on April 2nd. Friends and supporters have put together a fundraising event on April 28th to help Tyrrell pay for the medical attention during the long recovery that lies ahead. 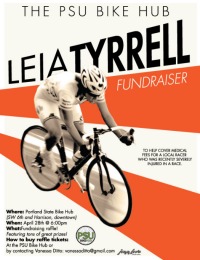 Tyrrell is a student at Oregon State University in Corvallis, where she studies animal science and is president of the OSU Cycling Club. Tyrrell is a rising star in Oregon bike racing after taking up the sport just a few years ago. Last year, she placed 3rd in the Collegiate Nationals criterium, was champion of the Northwest Collegiate Cycling Conference, and was the Oregon Bicycle Racing Association Road Race champion.

According to Tyrrell’s coach Anne Linton, she crashed in a corner during a final lap attack in the Cherry Blossom race and hit her head. “Luckily she was wearing her helmet ,” Linton says, “as it probably saved her life.” Being very healthy and young, Linton says her outlook for recovery is good; but adds, “It is going to be a long haul.”

To help raise money for her rehab, friends have put together a fundraising event that will be held at the Portland State University Bike Hub (SW 6th and Harrison). The event starts at 6pm on April 28th. All proceeds from the event (which features a huge prize raffle) will go to a recovery fund set up by Tyrrell’s team, Sorella Forte.

I’m donating my Showers Pass soft shell trainer jacket (size small) to the raffle (hint hint) and that’s one of the small prizes. Tons of great stuff and you don’t have to be present to win!

Poor kid. It takes huevos to race crit! Hope she makes a full recovery and is back on the bike soon.

Please let us know if there’s a similar fundraising event in the Corvallis area and I’ll pass it along to my business contacts there.

All the best wishes for a speedy and full recovery Leia – get back in the saddle soon!