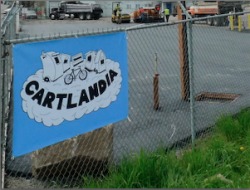 ‘Cartlandia,’ the bike-centric food cart pod on the Springwater Corridor Trail we told you about back in January, is about to open.

I caught up with the man behind the development (who also did the Mississippi Marketplace in North Portland), Roger Goldingay, to get an update and learn more about this exciting project.

Cartlandia is set to open on May 1st, and will have the capacity for around 35 food carts — all accessible directly from the Springwater Corridor Trail through dedicated, paved entrances along the path. 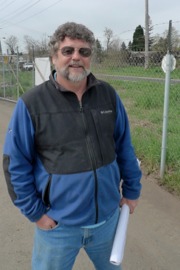 Being on the Springwater Corridor — which connects all the way to downtown Portland — the carts will be easily accessible to an entire region of bicycling customers. People can even take the Green Line MAX train to the Flavel St. Station (just to the east), hop on the Springwater, and be at Cartlandia in just a few pedal strokes.

The location along a biking and walking path was one of Goldingay’s key considerations in purchasing the lot.

The success of his Mississippi Marketplace food cart pod convinced him that bicycle accessibility would play a major role in any future pods he developed. A regular bike rider himself, Roger thinks, “bikes and carts [are] a perfect combination.”

“I want people to be able to go [with their bikes] to the area where they’re going to order and eat. We’re going to have parking for bikes everywhere.”

While bike and MAX access were key considerations for Goldingay, he admits that, “The carts will not survive if it’s just bike and foot traffic.” Cartlandia will have 40 car parking spaces to capture some of the 3,000 or so cars that pass by on SE 82nd every hour.

Regardless of how people get to Cartlandia, Goldingay also sees the project having spillover benefits for the surrounding neighborhoods. The nearby Brentwood-Darlington neighborhood is working-class and diverse (the Thien Quang Buddhist Temple is just across the street) — a much different type of neighborhood than inner Portland.

Goldingay says, “The response from the neighborhood has been amazing.” Answering my question about how nearby businesses were responding to his development, he said he hadn’t had any complaints. He referred to the success of Mississippi Marketplace, where businesses nearby noticed an upswing in customers after his carts became operational. Roger is hoping for a similar outcome with Cartlandia.

Goldingay hopes to attract more than food carts to the development. He is currently looking for bike-centric businesses and has talked with a potential investor about running a small bike shop or repair station. With about 1,000 bikes passing by every day, it seems like an ideal spot for some sort of bike business with a knack for service.

In you’re interested, drop Goldingay a line at Cartlandia.com.

For everyone else, it’s time to start planning some rides. A good chance to visit Cartlandia is the East Portland Sunday Parkways on May 22nd — the route comes within easily pedaling distance.

This is something that strikes me as cool in theory, and I’ll definitely check it out, but I fear it’s all going to go under come next winter.

Rebecca
Reply to  Dr. Something

A cart serving hot coffee, cocoa, and soup would probably do quite well during the winter. For much of the Springwater, you’re hard-pressed to find a convenient spot close to the trail to warm up on a chilly day. I’ll be stopping for sure.

I wonder how many carts will be there on opening day…

I hope there’s some good vegan burritos to be had…

It’s a bummer they put asphalt back down after installing the electricity and water. Other than that, I can’t wait to stop by on my way home and pick up some tasty dinner for hubby and I. Time to get that front basket installed on the bike!

Let’s support this as much as we can–and spread the bike love to Outer SE! Why the Springwater Corridor has never had an amenity like this before is beyond me. Even Ohio has lots of amenities along its trails.

And don’t forget to generously vote with our dollars to support bike-friendly businesses, which means not simply using cafes as changing rooms and parking lots. 🙂

Finally, food carts on my way home! Well, short detour. I’ll drop by for sure. When do we find out what carts will be there?

From what Roger told me, that’s an ongoing process. It also sounded as though someone new comes by every day asking him, “how can I get in on this?” Cartlandia’s got two carts officially signed up. One of these is called the London Pasty Company and will definitely be there by the 1st of May.

In keeping with the a bike friendly theme it would be cool to have an air station and/or if a spot was leased to a mobile bike mechanic/shop…It’s just a thought.

Hi We have set up free air and water for any bikes that stop by Cartlandia. One of hte food Carts – London Pasty Shop – is open now. More to come this week. We are still looking for a great coffee cart and a bike repairs cart! pass along the word Roger at Cartlandia 503-358-7873

I hope there is a cart that can pull a good espresso!

Yes, caffeine is a must! i believe this cart pod will be an unmitigated success, though I don’t know about 35 carts. In any case, I will support this 100%. It would be nice if they had nice clean pit stop public restrooms, even if it has to be for paying customers only, which might be understandable in the general context around there. Pick up a little road-carbs, make a pit-stop, air up the tires, send a postcard…. (hmm, maybe wifi available?)

i have passed there a few times… I think it will attract some interesting people living on the trail.

You raise an interesting point. Roger went on at length that a lot of the “nefarious” activities around the site have dissipated since they started construction. and removed the privacy screen that adorned their chain-linked fence.

there is freshly paved with asphalt. It looks more or less ready for May 1 Grand opening…

I think it’s a good idea, but 35 food carts would be way too many. There’s so many cart pods now that just have too many carts, they all end up suffering because no single cart ends up with as much business as they need to thrive. Start with about 4 to 6 tops and build from there, would seem reasonable.

i just visited today; alas, definitely not open may 01. but the guy said he was slated for -next- weekend (may08?).

Rode by today and it wasn’t open yet but a couple of carts in place. They need banners or something to announce the opening date.The trail was packed today and they could have been generating a lot a buzz! Can’t wait to check it out.

Thanks for the update. Sorry to hear it didn’t open as planned.

I am thinking about starting up a food cart in the next month and would love to see some photos of this cartlandia area. Can people drive up to this area or is it only for people on bikes and walking ? Is there enough traffic to make a living with a cart here ?
Thanks…. and please tell me where I can see some photos of the area.
Thanks everyone,and good luck all !

Mark – you probably answered your own question, but if not this paragraph in the article does:

“While bike and MAX access were key considerations for Goldingay, he admits that, “The carts will not survive if it’s just bike and foot traffic.” Cartlandia will have 40 car parking spaces to capture some of the 3,000 or so cars that pass by on SE 82nd every hour.”

I’m looking forward to stopping here en route to Lolo Pass this weekend with my coffee jar and mess kit.