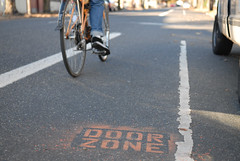 On April 7th, the Portland Police Bureau cited a man for Hit and Run in a dooring incident that occurred back in January.

According to the PPB, on January 23rd a man opened his car door after parking on N. Williams Avenue, just as a 34-year old woman happened to be biking by. The door knocked her off her bike and sent her to the pavement. The woman wasn’t seriously hurt but did have some bumps and bruises and her bicycle was damaged.

The man driving the car asked if she was O.K, but then drove off without leaving any contact information about himself or his insurance. A police officer took a hit-and-run report and then forwarded it to the Traffic Division for follow-up.

Due to a case backlog, it took several months for officers to address this incident. Once they did, the driver was contacted (in Vancouver WA) and cited for violation of ORS 811.700, “Failure to perform duties of driver when property is damaged,” a class A misdemeanor.

Traffic Division Sergeant Todd Davis handles all the hit-and-run cases that come through the PPB. When I contacted him about this case, he said it’s an example of how “We do take these cases very seriously.” “As a rule,” he continued, “I assign just about every hit and run case that comes in when the victim is a pedestrian or a bicyclist, even when there is very little suspect info to work with.”

Hit-and-runs and dooring are a constant source of frustration for many. It’s good to hear that, at least in this case, the PPB followed up and held someone accountable.

— This door-zone bike lane is one of many reasons it’s vital that we improve bicycling conditions on Williams Avenue. Please attend the open house this Saturday to let PBOT know you support better biking on this crucial, two-wheeled thoroughfare.

I had an interesting conversation with a dutch visiting scientist, about how he felt about biking in Boston. He said that it was fine, except the carelessness with which people open their doors. He said that if someone doored a cyclist in the Netherlands, they would immediately be surrounded by a crowd of angry cyclists, and would never do it again (he said it in such a way to suggest that they would be beaten up by the cyclists, but I can’t imagine that actually happening).

Biking in Boston is “fine?” Wow, and coming from a Dutchman. I respectfully disagree 🙂

cycler
I had an interesting conversation with a dutch visiting scientist, about how he felt about biking in Boston. He said that it was fine, except the carelessness with which people open their doors. He said that if someone doored a cyclist in the Netherlands, they would immediately be surrounded by a crowd of angry cyclists, and would never do it again (he said it in such a way to suggest that they would be beaten up by the cyclists, but I can’t imagine that actually happening).

DANG that would never happen here without Police
coming into play I feel. we need more ” door zone ” markers to wake ppl up, ones that fling them open.
becareful downtown PDX, very busy somedays with little bit of everything lets say.

So why do they keep putting bike lanes in door zones?

The real question is “why don’t people look before they open their doors?” Even if the bike lane wasn’t in the door zone, cyclists might still be there – or cars, or buses. Every so often on Hawthorne, someone will open their door in front of the #14 or other cars, with frequently predictable results.

The REAL question is, why aren’t we all paying more attention when we walk/ride/drive?

and perhaps more importantly – what can we do to change that?

I personally believe that infrastructure is nice but what we need is more awareness/thoughtfulness and accountability through better training. I once trained up for a class B drivers license and became a better, more educated driver. I was more aware, more responsible and better prepared. The fact that we have no secondary training for drivers, cyclist and other road users is a big part of the problem, as I see it. What do you remember from your 10th grade classes? Not much, right? I propose that everyone to go back for road/vehicle training at 5- 10 yr intervals- a cert process for all.

Why do doors open out?

All that sliding doors would change is that the actual human would get smooshed instead of the door. Then the biker would be at fault for running down a “ped”.

middle of the road guy
Reply to  Stig

I really dont get people who fling their door open. Forget cyclists….what happens when a bus comes by and takes the door with it?

Matt in comment 14: Yes, absolutely this is the central question. The answer or answers really very much inform every vehicle safety issue. In part I think mindfullness is missing from many components of daily life. Everyone is rushing and trying to do so many things at once. A personal automobile is viewed as a rite of passage into adulthood. Freedom, convenience, speed, ease. There is no measure of the true total cost. There aren’t significant consequences for misbehavior. There is too much tolerance for human error. I think you can tie it all up in a tidy basket by saying there is way too much haste.

I guess there was no PPB “Backlog” in the Joe Santos
incident considering the drivers vehicle was impounded by sundown on the same day, although they did respond which makes me all giddy,it seems that since she was knocked to the pavement vs the “buzz job”(no contact or road rash)it would have moved up the “List” a bit.

I saw someone almost door the Streetcar on SW 11th a couple of weeks ago. Unfortunately, they closed the door in time.

This case is a great precedent for anyone who is unlucky enough to get doored in the future.

Maybe I’m missing something, but from the short write-up above, hit and run sounds a bit harsh. Yeah, he didn’t leave his info at the scene, but he did ask if she was ok.

There are indeed missing details. I doubt the victim simply said she was fine, and the perp waited around to make sure, and then drove off.

Maybe she said she was okay, but was dazed and any reasonable person would wait around at least long enough to see her on her way. Or maybe she actually asked for his ID and then he sped off. The charges imply unreasonable behavior.

I agree with Aaron. There must be more to the story. You ask someone if she’s OK and she says yes. Schrauf, how long would you recommend waiting around to check?

I’ve seen someone crash to avoid getting hit. The motorist stopped and when the cyclist said he was OK, the motorist and the other cyclists who had stopped and I all departed.

Why is there this notion that Dutch people are so “Bikey all the time”. I have ridden extensively throughout that region and have found that the drivers hate cyclists. They’re worse than Toronto. They look for every possible opportunity to park in a bike lane. Bike lanes are where they piss.

The only difference is the cyclists there are used to it.

… And just in time to prove the point … http://www.cyclingnews.com/news/locals-throw-tacks-on-amstel-gold-race-parcours

bike lanes are not a safe option for faster riders…getting doored at 25-35 mph could kill you.

Williams from Beech and Shaver is a bit heavy on conflicts. On that fateful stretch of Williams, I have personally seen the following:

– Doors opened into other roadway user’s path
– Cars pulling out in front of bicycles, and indeed, other motor vehicles, without a signal and in an unsafe manner
– Cars on side streets failing to stop at a stop sign, only to block the bicycle lane, because they cannot see around the parked cars
– Every day I ride it, I see several parked vehicles with two wheels in the bicycle lane
– Once, I saw a car erratically and unpredictably use the bicycle lane as a third travel lane, nearly taking out another car and me in the process. I should note that the car was a fair bit wider than the bicycle lane.

The bicycle lane on Williams between Beech and Shaver meets the criteria of a hazardous condition as set forth in ORS 814.420 (3)(c), and I, therefore, no longer use it. I take one of the travel lanes, instead.

Mike
Reply to  Joe in Wilsonville

I have nothing against cars or bikes; it’s the people piloting them with total disregard for anyone else that I have issue with.

middle of the road guy
Reply to  Joe in Wilsonville

actually, mine is quite useful.

Thank you PPB for following through on this and citing the driver.

As a driver, certain times of day/weather require vigilance in making sure you don’t door someone. Fog on window, rain on window or mirror, dazzling car headlights at night, reflection on side window at night, etc. But none of these make it okay to open your door into a traffic lane without taking all necessary measures to ensure you’re not going to block someone’s way.

This ruling by the PPB is an excellent precedent for ensuring that all drivers need to look carefully before opening their doors, no exceptions.

Side note 1
The “Beech to Shaver” section is going to get worse, they’re building a 4 story commercial/residential building between Fremont and Beech, so the heavy parking zone will soon stretch from Fremont to Shaver.

Side note 2
I always turn my headlight on “blink” when going through high-door-risk zones during the day. I find I get a lot more respect. It’s not legally necessary, but it helps, and probably generally elevates the profile of bicycles to potential doorers. It’s much easier for a blinking headlight to catch a drivers’ eye in their side mirror than just a bicyclist.

Jonathan, any word on what cross street/intersection this was at? Would be helpful to know going in to the open house sessions.

Mike
I have nothing against cars or bikes; it’s the people piloting them with total disregard for anyone else that I have issue with.

I always pay particular attention to whether a parked car has an occupant or not. I never assume they seem me and always give an occupied car a slightly wider berth.

What about when the driver fails to give insurance info when a bike is damaged? Should they be cited? I was doored. The driver attempted to leave the scene, but the accident happened in front of a school during the morning rush and a teacher suggested she wait for the police to arrive. At the scene, the driver actually admitted that she did not look before opening her door. I was injured enough to go to the hospital in an ambulance and the fork on my bike was destroyed. The police didn’t ask the driver for her license or insurance. Lucky for her because she DIDN’T HAVE INSURANCE! Bad for me. Now I’m stuck with $3000 in ambulance/emergency room bills and a mangled bike to fix. I hired a lawyer, but without insurance, he said there isn’t much he can do. I’m still shaking my head.

Sorry to hear of your crash. If you have an auto insurance policy of your own, you have PIP (Personal Injury Protection) which should cover your medical expenses. Nothing for pain & suffering though. If you can get name & address of driver & damage to bike is low, you can go to small claims court & later file garnishment on wages, but that might be more trouble than it’s worth.