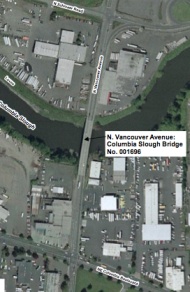 The bridge, a vital north-south
link in the bike network, has been
closed for over 10 months.

The Vancouver Avenue Bridge over the Columbia Slough in North Portland has been closed to all vehicle traffic since last May for a rehabilitation project. PBOT initially planned to have it open by December 2010, but project delays caused them to push back the opening until the end of February.

Unfortunately, the bridge remains closed. After several readers got in touch with us wanting to know an update, we found out that PBOT now plans to have it open by April 16th. Among the reasons for the delayed completion of the project is the wet weather which has made it difficult to do concrete work.

The closure has caused a major headache for people who rely on Vancouver Ave as a connection between Vancouver (WA) and North Portland. Not only does the closure make bike access much more difficult, but the detour options were difficult to follow and put people on roads that are much less comfortable than Vancouver Ave.

Is PBOT doing the work themselves, or is a contractor involved?

Perhaps an out of state contractor that was not aware of local climate like rain?

While on active duty in the US I moved in to some brand new base housing. Great improvement over the previous housing.

Architectural firm was based in California and my posting was in Nebraska. No problems until winter: Upstairs bathrooms of a certain floor layout all had continuous drain clogs. Turns out that in California plumbing drains can be uninsulated and exposed; not so in freeze prone areas.

We’ve had unusually wet weather since last October, only in January did we have below average rainfall, and in March we broke a record.

Too bad…as I have found the ‘bike’ detour routing less than ideal and less safe.

Does the new bridge design allow easy physical connection to the future (proposed) bike path along the dike below? Or will the bridge railing need to be rebuilt?

“closed to all vehicle traffic” – isn’t it also closed to pedestrians? If not, why can’t people walk their bikes across it?

I was about to walk/ride my bike across it a few weeks ago. >:)

Thanks Jonathan for getting the scoop on this, my current detour via Lombard and Interstate is certainly less than ideal….

A fellow commuter and I ‘walked’ our bike across the bridge on Friday. We had to lift our bikes over the fence to one another to get through.

I’ve walked over the bridge a couple times. It looks good. Bikes are up on an extra-wide sidewalks.

My complaint is that the road is “extra-wide” as well, but the lanes are pushed out to the edge of the sidewalks with a wide painted median. They haven’t painted them yet, so there’s still the possibility of redoing the plans and striping a 2′ buffer between the sidewalk and the traffic lane and knocking the painted median from 10′ down to 6′.

Trucks are big, heavy and long. I want a little more space between the trucks and me wherever possible.

If you favor the “buffered sidewalk” plan, send an email to David O’Longaigh at PBOT. David.OLongaigh@portlandoregon.gov ASAP

anyone know if this bridge is open yet? it sounded like it should be by now, but i haven’t seen any updates posted.

I crossed the bridge yesterday (Tuesday the 19th) evening. It is not officially open, but the construction crew was allowing bicycles and pedestrians through. I walked it because of the state of the pavement and having to go around equipment. A jogger was headed across it in the other direction at the same time. I’m not sure if you can get past the chainlink fences after hours, but they are in the process of finishing the asphalt paving. The construction crew claimed it would be open next Monday (the 25th). It really did look like they just had some paving and presumably lane lines to paint at this point.

yeah, any word on if it is open now?

it should be open. I’ll get one final confirmation from PBOT and post it here asap.

It’s not open. They’ve finished paving the bridge itself, but there’s still sections leading to it that need asphalt as of Tuesday (the 26th) evening.

I was able to ride/walk across it tonight. It’s not officially open but it’s easily passable as a pedestrian.

I think the May 3 sign is actually the closure sign from 2010 if you look closely at it. I had the same thought as Anna when I noticed it (going south) yesterday, but then realized that it was actually last year’s notice.
I agree the bridge is passable, and the construction crews don’t seem to mind, but the signs and gates indicate you’re not really supposed to be using it.

Any word on whether it’s officially open?

According to the message boards, it is open now. I haven’t been there since Tuesday myself, at which point it was still officially closed.
http://bikeportland.org/forum/showthread.php?p=26213