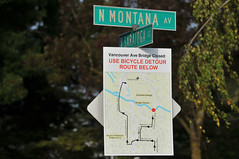 Those detour signs will be up for
another month or so.
(Photo © J. Maus)

A project to repair and rebuild the Vancouver Avenue Bridge in North Portland has been delayed and isn’t expected to be completed until the end of February. The bridge — which crosses the Columbia Slough just west of Martin Luther King Jr. Blvd — is an important north-south connection; and even though a detour is available, the routes are not as convenient or safe for people using bicycles.

The project started eight months ago and the Bureau of Transportation (PBOT) initially said it would be completed by the end of December 2010. According to PBOT’s Bridges and Structures Section Leader David O’Longaigh, delays at the beginning of the project have pushed the completion date back.

O’Longaigh told BikePortland reader Ian Wigger via email that, “We did have some set backs at the start of the project with utilities. We are now hitting the home stretch and expect the bridge to be open for public use by end of February at latest.”

Tim Adams lives in Vancouver and works in the Lloyd District. For him, the bridge was a direct and safe route into work. He called me yesterday asking for an update. “Getting over to Interstate [the suggested detour route] isn’t too handy,” he said, “I’d rather be on Vancouver going through neighborhoods where there’s less traffic…. I’ll be thrilled when it’s done.”

We’ll keep you posted if there are any more delays. But at this point, expect it to re-open late next month.

I wish ODOT would put up some “BIKES ON BRIDGE ROADWAY” signs on the MLK bridge over Columba Slough, or even those push-button activated flashing yellow lights like they use on tunnels on Highway 101 on the coast. ODOT was progressive back in the day, too bad it hasn’t translated to better facilities in Portland.

The MLK bridge, if you’ve never ridden it, is 55 mph, no shoulder either side, no sidewalk northbound.

Too bad. Nice sign – though I did not see this one – perhaps it was placed too far ahead of the intersection (and due to downhill speeds) perhaps another one is needed at the intersection.

I tried to cross this route back in October and found the signed detour to the east (signed at the intersection barricade ) along the north sidewalk to be poorly thought out and implemented. The sidewalk had a barrier or gap on the north side. It made me wonder what level of workzone planning is actually done for vulnerable road users. And with this route being as important as it is why no marked temp in street detour bike lanes/ sharrows on Columbia?

I ask PBoT Director Tom Miller and the BAC to look into this topic. If Portland is really platinum level serious about growing bike mobility and safety then such workzone mitigations can be done. There are many good models out there if we choose not to ignore them. Perhaps we need zhar of workzones!?

I thought this was supposed to be finished last spring.

I’ve road this detour a month ago and enjoyed my time.

Look forward to the completion of the Vancouver ave bridge.

huh, any chance of a green light activator where we meet Columbia at Vancouver after this project is finally done.

in the dark that is very very dangerous there to cross and Columbia traffic moves fast. the light never goes to green unless i park my bike and walk over to the crosswalk signal.

Went by the site on Wednesday. Still blocked off. 🙁

Any updates to this? Planning to get back on the saddle and this bridge is a pretty key crossover point for my commute.

Still closed. Looks like they are in the paving stage of things, though. This will cut so much time out of my commute and make it much safer.

is there a new estimate for when it will open?