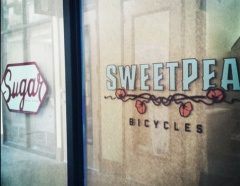 Scroll down for several bits of news from local bike businesses, all wrapped up into one post for your reading convenience… 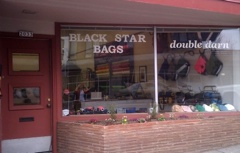 Dave Stoops’ Black Star Bags has moved from Alberta Street in Northeast to Hawthorne Blvd. Stoops has made quite a name for himself by making bomb-proof, custom, and highly functional messenger bags, hip pouches, backpacks, and more. Previously located at NE 10th and Alberta, Black Star’s new location is 2033 SE Hawthorne. The space is shared with another handmade bike accessory and apparel maker, Double Darn Clothing. Check out the Black Star Bags blog for more. 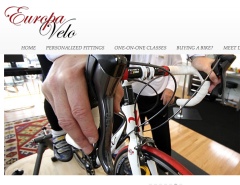 Veloce Bicycles owner Demetri Macrigeanis has sold his well-known shop on SE Hawthorne Blvd and has opened a new bicycle fitting business called Europa Velo. I heard some rumors about this and then read a story about it in The Oregonian on Tuesday.
Europa Velo is located at 1836 NW Overton and will focus on one-on-one bicycle buying consultations and fittings.

Ruckus Components hires new employee, expands service
Ruckus Components is a thriving business that has carved a strong niche for their expertise in carbon fiber repairs and products. Owner Shawn Small (who’s also our Bike Science columnist), says they’ve expanded their repair services nationally and have a lot of interesting projects in the works (including a bike modified for a Paralympic athlete). Ruckus is also now the official, authorized factory repair center for SCOTT, a major bike brand.

BicyclingHub.com nabs “Silver” Bicycle Friendly Business award
Online and bricks-and-mortar bike apparel retailer BicyclingHub.com has earned a Silver designation from the League of American Bicyclists for its bike-friendly business practices. The award was announced at the recent National Bike Summit in Washington, D.C. For 2011, BicyclingHub.com says they plan to launch a mini-grant program for community groups that promote bicycling and sponsor a cyclocross team in the coming Cross Crusade series.

cool deal on the expansion of these businesses. now I just need to convince Portland to buy our mountain bikes and our St0p Cycles commuting bikes so we can afford to expand!

Another upcoming change is Universal Cycles – currently in NW Portland, but headed to the eastside within a few weeks. E Burn at 22nd if I’m not mistaken.

I was saddened when I learned that Demetri sold Veloce Bicycles. I think it actually happened some time around Christmas. He gave me an awesome deal on a Felt F4 a few years ago and it’s the best bike I’ll ever want. The new owner seems like a nice guy though.

Good luck to both of them!

The Community Cycling Center also just expanded! We added 1250 square feet next to our shop on NE Alberta Street so we can build more bikes for programs. We are developing a workforce/worksite program in our new space to create employment pathways for young people. While we were at it we remodeled our bike shop to make it more welcoming. Come see what our shop staff and a cadre of volunteers did (it took five days).

Or check out this video…
http://www.communitycyclingcenter.org/index.php/check-out-the-bike-shops-new-look/

Come by and see the progress!

I don’t think it’s any coincidence that bike stores are doing better. With a large portion of people realizing that 1 – it’s absolutely ludicrous to be paying the fuel prices we do and 2 – bikes are a great method of short range transportation that keeps you healthy and provide great exercise it’s really a no brainer to at least use a bicycle for some methods of transportation. And here’s to more of it! Cheers from Canada.

Wow..weird to see big players moving down to S.E. from North Port-Francisco instead of the other way around. Can it be Hawthorn property is on the cheap now that the gentrification is almost complete in our northern neighborhoods?

As a son of Tasty I was very excited to see that Sugar and Sweetpea are moving into the HUB building.

Rumor has it that “A Better Cycle” PDX’s most user-friendly worker-owned bike collective (2324 SE Division) might be expanding their space as well. Check their blog http://abettercycle.blogspot.com/

Disclaimer: I’m just a satisfied customer of these hardworking fellows.

River City Bicycles Outlet has been open for just about 2 months now. 534 SE Belmont St. Just 3 blocks from the flagship store at 706 SE MLK Jr Blvd.
14 different brand, so far, under one roof.