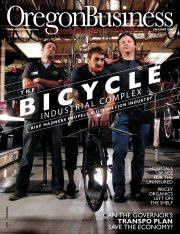 The Portland (and Oregon-wide) bike industry is the cover story in the January 2009 issue of Oregon Business magazine. Titled, The Bicycle Industrial Complex: Bike Madness Fuels $150 Million Industry, the lengthy story touches on many facets of Portland’s bike scene to paint a picture of how growing numbers of bikers are helping create a healthy niche economy.

Here’s a snip from one of the opening paragraphs:

The market for anything connected to bicycles in Portland runs rich and deep, and entrepreneurs are sprinting to create new ways to tap into it. About 50 new bike-related businesses have sprung up over the past two years here, and while some are destined to remain forever fringe if they survive the downturn at all, others have tremendous potential.

Written by Ben Jacklet, the piece describes our region’s bike economy as “yet another Oregon niche industry with a dreamy upside, in the tradition of solar power, craft brewing and organic farming.”

“…while the ongoing collapse of the nation’s auto industry is delivering a painful blow to the U.S. economy, it’s not hurting the outlook for Oregon’s bicycle industrial complex.”
— Journalist Ben Jacklet in Oregon Business magazine

Cycle Oregon ride director and bike industry veteran Jerry Norquist is quoted in the story. He tells Jacklet that he’d like to see the industry in Portland “get to the next level”. Norquist admits that attracting a “top-tier” manufacturer like Trek to Oregon would a “long shot”, but then adds,

“At the same time, the next Trek is out there, and we have a good opportunity to attract the next big thing, with all that’s going on in Portland and in Oregon.”

Check out the full article at OregonBusiness.com.

The Trek comment is interesting. With our location on the Pacific Rim, it would seem natural to have a major manufacturer based here, from a brand, R&D, talent, and logistics standpoint.

Great article Jonathan. I loved reading this story.
Natalie’s quote was amazing:
“We want the Oregon bike to be like the Maine lobster or the California avocado. We want to make Portland the place to go if you want to buy a custom bike.”
So true.

Ironically, many of those “Maine Lobsters” over the years have come from Nova Scotia and New Brunswick 😉

The next level? Ask for a piece of the Obama Stimulus. You guys got a better chance than Tulsa, OK.

Trek has a distribution center in Ontario California to handle the incoming product from the Pacific Rim.

Maintaining their domestic manufacturing in Wisconsin makes sense since it is centrally located for the US market. The majority of their product isn’t manufactured domestically so this is not a huge logistics problem to ship the high end products world wide.

As for design that can be done anywhere. There’s no need with today’s technology to co-locate designers with manufacturing. Look at Specialized and Nike. Everything is designed domestically and manufactured overseas.

If Oregon and Portland has or is truly becoming a “brand” in the bike industry, it would be great to see our commercial embrace of that brand be vertical as well as horizontal (i.e. design more things and MAKE more things). Thus the impact on the local economy can be at all levels.

We have the designers and the craftsmen, why not have a new player (or players) in the bike industry that is fully Oregon based and bred? Or the expansion of an existing brand into new territory…e.g. a “general consumer line” of Vanilla bikes?

Beyond the jobs, the creation of opportunities for a wider variety of skills would concretely expand the role of the bike industry as a point of local pride: to a point where it can move it beyond marginal terms like “niche” and “fringe”.

Wouldn’t it be great to have the streets of Portland filled with bikes and accessories made in Oregon? (And yes I would settle or “Assembled in Oregon” at the outset, I can be somewhat pragmatic when needed)

Arguably, an expansion of the bike industry to include broader-based local manufacturing would also provide fuel for expanding bike infrastructure as means for showcasing and supporting a local industry.

Look a bit further north… there are some very successful mountain bike companies in the Pacific Northwest: Kona, Transition, Cove, Rocky, Evil, Corsair… ever wonder why they are in northern WA/BC and not in OR? We already manufacturer a ton of high end frames here in Portland (via SAPA) but why are there no MTB manufacturers based here (aside from King)? Limited availability of MTB trails? Why isn’t mountain biking popular here?

The next TREK?
Oregon’s cycling economy,which is substantial, is not waiting for the “next big thing.” I mean, come on!!- there’s over 2doz. listings in the “Bike Builders” column alone.

Check out this morning’s NY Times article entitled “A Surge in Bicyclists Appears to Be Waiting.” Is Oregon’s bicycle industry really doing that well?