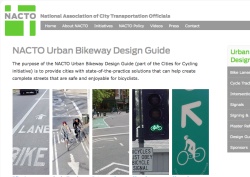 The National Association of City Transportation Officials (NACTO) — a coalition of 15 major U.S. cities — announced the official launch of their long-awaited Urban Bikeway Design Guide today. The guide is a product of NACTO’s ‘Cities for Cycling’ initiative that debuted back in December 2009.

In a press release, New York City Transportation Commissioner and NACTO President Janette Sadik-Khan encouraged transportation engineers in cities across America to adopt the standards, saying the new design guide, “gives planners and designers the tools they need to get to the next level.” “These guidelines represent the state of the art and should be adopted as the new standard around the country.”

“The Guide offers substantive guidance for cities and towns in the U.S., where existing guidance has failed to move forward as quickly as international experience and growth in cycling would warrant.”

The impetus behind the Guide came from city transportation officials (engineer Rob Burchfield and planner Mia Birk, both from Portland) who were frustrated that the Federal Highway Administration’s Manual on Uniform Traffic Control Devices (MUTCD) and the American Association of State Highway and Transportation Officials’ (AASHTO) Guide to the Development of Bicycle Facilities, both considered the bible for traffic engineers, had failed to keep pace with innovative bikeway treatments being successfully used in Europe and some American cities.

Tired of waiting for official adoption into those influential guide books, they decided to make their own.

[We explained this frustration and detailed the tension between city transportation officials and federal regulations in a post from November 2009 titled, Cities for Cycling could have huge impact on bikeway innovation.] 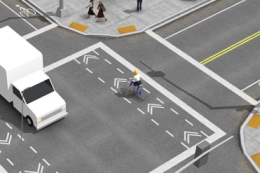 Here’s more about the Guide from NACTO:

“The Guide offers substantive guidance for cities and towns in the U.S., where existing guidance has failed to move forward as quickly as international experience and growth in cycling would warrant. The focus of the guide is on-street facilities, including cycle tracks, which provide protection for cyclists in high-traffic environments. Guide users can view detailed plan drawings, three dimension renderings of the designs, and pictures of actual projects from around the country.”

The importance of a new design guide that specifically focuses on urban bikeway treatments cannot be overstated. Without official standards to adopt and expert guidance to refer to, city transportation officials who wanted to install things like bike signals, bike-specific pavement markings, and separated bikeways, were at the mercy of FHWA and AASHTO guidelines — both of which have become dirty words to many planners and engineers in America’s largest cities. If you went against the federal standards, you’d be taking a big risk.

“The feds are in a tough position, they’re almost in a regulatory role instead of being in a leadership role… Their agenda is highways, but this is an urban issue, a city issue. We want them [the FHWA] to get out of the way.”

Back in August, we reported that the US Department of Transportation might consider interim approval of some of the design treatments detailed in this new guide. No update on that yet, but with this new guide being launched during the National Bike Summit and with NACTO President Janette Sadik-Khan set for a keynote speech Wednesday morning, we wouldn’t be surprised to hear an announcement on that front.

The launch of the Urban Bikeway Design Guide also comes with a companion website that includes 3-D drawings and photos and detailed design guidance showing how to implement the various treatments. You can browse the new guide at C4CGuide.org.

Last night as I was riding home up Williams dodging the bus as it entered and exited through the bike lane to get to the bus stop I had a thought: has there been any discussion of moving the bike lanes to the left of the road on these one way streets?

Also, not sure if you saw a cool video posted on ecovelo site about moving bike lanes to the curb and then parked cars on the outside. Looked pretty smart and safe.

It could work, though.

specs for conventional bike lanes:
http://nacto.org/wp-content/uploads/2010/08/Conventional-Bike-Lanes_Annotation.jpg
not difficult to think of examples where existing facilities in portland do not comply with even these modest requirements.

On Outer SE Division (around SE 122nd) the bike lanes seem to be closer to 3′ wide – half the minimum recommended width on those specs!

SE 122nd & Division gets my vote for the worst bike lane integration, due to narrow lanes for everyone involved (4 auto lanes plus center lane, bike lanes and parking on both sides of the street). Division just isn’t wide enough to give everyone the space they need.

Ravenna in Seattle has been like that for a long time as well. It can be a little tricky though, as Ravenna has a full lane bike lane not marked very well. Cars drive in it A LOT!

Paulie, you have clearly not riden from Naito to Barbur transition from downtown in the SW! That is worst bike lane integration or lack there of.

Then again I’m sure there are spots that need improving all over town, right?

The 12 ft (7ft parking/5ft lane) minimum recommendation for standard bike lanes is disappointing. It’s essentially an unsafe condition, because the majority of the bike lane is in the door zone. I’d be happier if cities would stop installing bike lanes in those situations entirely and switch to sharrows placed out of the door zone.

Or, and here’s the crazy part, take out the parking, since streets are intended for the movement of people, not the storage of private vehicles. 🙂

Hey Hart… I have switched back to this comment format because I was annoyed w/ a few things about the new format… mostly the persistent complaint that it was hard to follow threads because it was hard to quick see new comments.

I am bummed to see the comments focus on specific facilities instead of the much broader and more important impact of this document: to fast-track the creation of truly bike-friendly facilities in US cities. This manual is incredibly important and I think we’ll see some truly impressive on-the-ground projects that flow directly from this. I’m sure there are specific details that can be criticized, but let’s not lose sight of the forest for the trees…

And Alexis #8, I’ve been thinking about the policy you propose lately (‘streets are for movement of people, not storage of private vehicles’) and wondering if/how that might impact our bike corral installation in Portland. As long as our streets do currently store private vehicles, I’d like to see the balance shift towards storing non-motorized vehicles…

are
Reply to  Jessica Roberts

i will take responsibility for some of this and will suggest that if someone wants to “fast track truly bike-friendly facilities” they ought to think more carefully about what exactly constitutes a “bike friendly facility.” the so-called “conventional bike lane” is almost always an inadequate facility, and the minimum specs provided in this document will simply perpetuate that problem.

Dangit, I loved the updated format. Consider a combo of the two, maybe? Like new comments are the cream color and replies are white. Just liked seeing my Peugeot up there…

This guide is a very big deal and should significantly increase the rate of implementation of urban bikeways in America… As for specific gripes about standards; remember, the whole idea of this effort vs. the AASHTO/MUTCD is that changes and revisions can be made more quickly.

And Hart,
Please hang with us on the comment format. It’s very easy to switch back to the newer style w/ gravatars and threaded comments. I wanted to see how this old format was.

This is a big improvement over what had been available previously. Design professionals now have another took in their tool box.

Having bike lanes on the right of parked cars has to be the worst idea ever. There is almost no visibility when turning a car right or going through one of these. SW Broadway is a mess since they did this. Cyclists better watch out because drivers cannot see you through all the parked cars even with lights. There is just no visibility in this design.

You’re welcome to your opinion of course, but according to a just-released report, most people like the new cycletrack:

“The evaluation has some fascinating nuggets of information:

Cyclists expressed support for the cycle track. Over 70% of survey respondents indicated that the cycle track made cycling on SW Broadway safer and easier…

As for the concern about the visibility, I think I would feel less at risk for being right-hooked (which would be the major concern when discussing visibility) in the Broadway cycletrack than in a traditional bike lane.

For one thing, where a traditional bike lane is right next to the auto travel lane, and allows you very little time to react to a right-hook, the cycletrack gives you eleven feet of buffer zone (8′ of parking and 3′ of shy zone) between a car that is about to turn and bike travel lane: http://bikeportland.org/wp-content/uploads/2009/04/cycletrack_bway.jpg

And the City further addressed this concern by removing two parking places just before the intersection. You can see what I mean here: http://boomhower.com/cycletrack_intersection_birdseye.png. (That’s a bird’s-eye view I just rendered out from a 3D scene that was part of an animation I did for this video about the cycletrack: http://www.vimeo.com/10559007.)

So I don’t think it’s accurate to say, “There is just no visibility in this design.”

There are potential problems with the cycletrack, but they have solutions, some of which have already been implemented.

are
Reply to  Spencer Boomhower

the broadway cycletrack does not go through any right turn scenarios, so the right hook risk is zero with or without the track. in any event, the right hook is entirely an artifact of the far to right rule and the mandatory sidepath law — and of the miseducation of cyclists, reinforced by these laws and the lane striping, to ride to the right of motor traffic. on broadway, and on pretty much every downtown street, where bikes are moving at roughly the same speed as motor traffic, it is not at all difficult to assert a travel lane and not ride to the right.

This is great to see. Reading through Mia Birk’s book, it was striking how often the MUTCD stood in the way of innovative bicycle infrastructure. Something like this new guide (and its vivid illustrations!) is sorely needed.

Now, where is the stuff about storm drain catchbasins? I didn’t see a thing about it when I searched the site.

Go here and click on the “Recommended” tab; it’s the third item down. They pretty much just quote the AASHTO language on this topic.