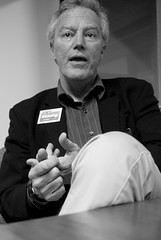 Bob Stacey, the former director of land-use non-profit 1000 Friends of Oregon and candidate for Metro President, has withdrawn his application for a vacant spot on Metro council.

Stacey — who has become a favorite of many bike advocates in Portland for his positions on transportation issues — says he made the decision because it is clear to him that he wouldn’t win a majority of Metro Council votes and that former Oregon Governor Barbara Roberts looks to be a shoe-in. Not wanting to “waste the time” of his supporters, Stacey says he’ll bow out of this race to focus all efforts on the May 2012 Metro election.

He published a statement with more details on his website. Read the statement below:

Today, I’m withdrawing my application for appointment to the vacant District 6 position on the Metro Council. Last Wednesday, Governor Barbara Roberts filed her application for that seat, and graciously called me immediately to give me the news.

Governor Roberts told me that several members of the Metro Council had phoned her that day, the deadline for applying for appointment to the District 6 vacancy. The first phone call came at 8:30 in the morning, from a councilor who told her that none of the applicants for the vacancy—including me—could get majority support from the Council. This councilor asked Governor Roberts to apply, so that the Council logjam could be broken. During the day more councilors called her, urging her to fill out the application form and submit it by day’s end.

It’s clear that there’s no reason for me to continue to seek the appointment. I certainly don’t want to waste the time and effort of the many friends who planned to appear and testify on my behalf at this week’s hearing before the Metro Council. Accordingly, I’m withdrawing, and I’m shifting my efforts from the members of the Council to the ultimate decision makers: the voters of District 6.

I’m reaffirming my intention to campaign for election to the Metro Council on the May 2012 ballot. I received strong support from voters in this part of Metro in the 2010 election, and I’m eager to ask for their votes again.

Governor Roberts has announced she won’t be a candidate for election in 2012. However, she won’t simply be a “caretaker” councilor. She’ll be called upon to participate in important decisions facing Metro over the next two years, involving economic recovery, land use, transportation, and investment in public facilities, among many others. I’m very pleased that her deep leadership experience in state and local government—and her passionate support of sound land use planning, social justice, and prudent public budgeting—will help guide Metro decision making for the balance of Robert Liberty’s term.

Last week we shared the list of eight candidates vying for the position left vacant by the resignation of Robert Liberty. Current Metro councilors will pick Liberty’s replacement (after a public hearing and possibly a debate) by the end of this month.

I figured Roberts would be the obvious choice. I bet she will do a swell job.

“…none of the applicants for the vacancy—including me—could get majority support from the Council. This councilor asked Governor Roberts to apply, so that the Council logjam could be broken.”

I am amazed by the honesty of this statement because it openly speaks to a staggering reality — that this is often how politics really works, behind the scenes and away from the ballot box. I’m not sure how I feel about this reality, because interpreted one way it’s an example of startling honesty; but interpreted another way it could be seen as somewhat invalidating voters’ opinions. This is a tough one for me.

It’s particularly problematic that where the votes were is secret.

In other words, we don’t know who the three councilors are who wouldn’t support the person who won that district in the Metro Presidency race in November, and who is very similar to Robert Liberty’s background and values (the twice-elected councilor who is being replaced.)

On to 2012. Stacey won this district before, he can win it again – with your help.

It’s particularly problematic that where the votes were is secret.

The public (who *all* voted in secret) also didn’t want Stacey. Do you find those “particularly problematic”?

I’m genuinely curious why Stacey is going to try a *third* time (or even more, perhaps) to insert himself into Metro. I’m not seeing much honest interest in that–instead, I’m hearing and reading a host of conspiracy theories and “they just don’t get it, Stacey’s the man” laments. Is it just that readers feel that no matter what happens, Stacey must be in Metro?

Actually, the voters in the district in question wanted Stacey to be Metro President – 58% of those voters voted for him in November.

Stacey is planning on running again, after being one of two people to make it through a challenging primary and losing the general race by about 1,000 votes out of 400,000 cast.

Remember, elected officials often run many races, and lose some of them (especially at the beginning of their careers). Barack Obama lost his US House race in 2000. Earl Blumenauer lost his race for Portland Mayor in 1992.

The best of us, when we fall short at something we want, dust ourselves up and try again.

As far as secret ballots, the appointment process is different than the electoral process. For example, the Multnomah County Commissioners had to say who they were supporting when they were appointing now-Senator Chip Shields and Rep. Lew Frederick. I don’t know if the Metro appointment process is similarly open, but clearly the votes were already counted (pre-public hearing) and secret.

Nope. The voters who were eligible to vote for the Metro candidate elected someone other than Stacey. Unequivocally, fairly, and with lots of time and information with which to make their decision. Waxing wonkish about the President and districting and other such abstractions doesn’t make it less true, or only partly true.

And, because anything other less than black and white seems to confuse many folks, let me clarify–I didn’t find either candidate (Hughes or Stacey) thrilling. They both have the same fundamental beliefs about using nature and developing land, and the evening promises about “bikes” and “sustainability” are weak excuses for meaningful relationships between citizens and the place they live.

I’m happy to bet you a beer that we pick ten random people in the phone book and fewer than half can tell you what Metro does. Double or nothing that less than one can tell you the amount of farmland proposed to be developed under one candidate’s policies versus the other.

It was a fair election, and Hughes won. Congrats to Tom!

As far as “trying to insert himself” that’s really strange language to describe someone who’s announcing to run to be elected by the voters.

My phone-dialing hands and canvassing feet stand at the ready.

I was surprised to see Roberts downplayed so much in the first Bike Portland article. Former (relatively popular) Gov vs. former friend on 1000 trees. Hmmmmmm… tough choice.

You guys are acting like this was stolen from Stacey. Had Roberts run in the first place she would have probably won on name recognition alone.

Where do you find that she was relatively popular? I’m not disputing it; I just don’t have a sense that she was nearly as popular as either her predecessor or her successor (“relatively”).

And it’s not Roberts’ candidacy I take issue with. It’s the smoke-filled room deal-making that has plagued Portland politics for too long. They don’t want to work with Bob Stacey because of petty personal issues and couldn’t in good conscience appoint Bob “Build Big Stuff for Jobs” Shiprack to replace former 1000 Friends of Oregon director Robert Liberty on the council.

Therefore they went recruiting for a compromise candidate that wouldn’t have otherwise run. It seems like a truly childish avoidance of working with someone they’re not particularly fond of on a personal level. You know what? Sometimes you have to work with people you don’t like, and sometimes those people are good at what they do. I also am of the opinion that an adversarial Metro councilor willing to hold other councilors’ feet to the fire would be a very good thing at an agency that seems content to not make the most of its mission.

Again, I’ll be ready to campaign for Bob in 2012, and I am disappointed in Governor Roberts for not recognizing this as the backroom power play it was.

Feels like maybe METRO is interested in the prestige of having a former governor on board, but since Roberts endorsed Bob in the election, I’m sure she’s on the right side. But come 2012, I’ll be back volunteering for Bob’s campaign.