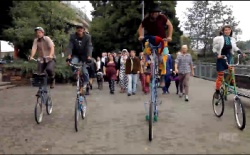 The new, six-part IFC mini-series Portlandia is proving to be a draw for a local bike tour operator. Evan Ross, owner of Portland Bicycle Tours, says the new show has spurred a group of tourists to request a special, Portlandia-themed route that takes them to locations they saw in the show.

Ross, a “big fan” of the show himself, says a recent tour on the Eastbank Esplanade (where the “Dream of 90s” sketch was filmed) got folks talking about the show. A few days later, Ross got a phone call from a couple in Maine who were planning a trip to Portland and wondered if he might be able to put together a “Portlandia Show Tour.” Always looking for new routes that give visitors “cultural experiences,” Ross obliged.

On the Portland Tour, Ross and his clients visited The Gilt Club in northwest, then rolled over to the Esplanade and then to a small, independent bookstore on SE Division. They also visited a local farm that provides produce for restaurants downtown and a food cart pod in southeast.

“I’m hoping that we’ll see a food cart scene in an upcoming episode or a Santacon reference,” Ross says, “I love this city.”

I thought the bookstore in episode 1 was “In Other Words” on Killingsworth and Vancouver across from Ethos. Obviously I am not a fan of Portlandia! LOL

Yes, it was that bookstore… I’m sure Evan knows that too… but he had paying customers and riding all the way up to NoPo wouldn’t have been as fun of a loop!

That’s odd – the NPR story about Portlandia that was on at the end of last week said it was Reading Frenzy.

i think in the thunderant skits from a while back they used reading frenzy at times. but it’s been a while since i’ve seen those.

The funny thing is that there are a NUMBER of bookstores/farms/restaurants it could have been about!

Well, looks like Portlandia nailed the stereotype – everyone can think of a possible identity for this bookstore. But which one servers complimentary kambuchuchujuji tea?

It’s true, I like to switch it up. We’ll be visiting the Killingsworth store soon, but the participants had heard about Longfellow’s and requested a stop there. Thanks to all the locals who tell their friends about us when they visit!

@Evan, you can “put a bird on it” at Land Gallery. They also sell BTA gear there 🙂 just sayin…