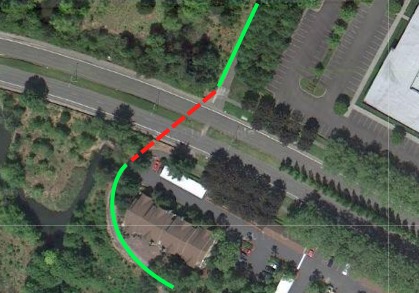 This image shows the existing gap in the Rock Creek Trail (green) where it intersects with Evergreen Parkway.

The City of Hillsboro has something to be thankful for today. They’ve just been awarded $426,275 to construct a mid-block crossing for the Rock Creek Trail at Evergreen Parkway. The grant comes from the Oregon Department of Transportation’s (ODOT) Bicycle and Pedestrian Grant Program. 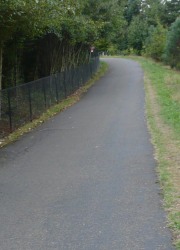 The City of Hillsboro and Washington County were co-applicants on the grant. They applied for a total of $852,000 so they could also fix the existing gap at Cornell Road. They didn’t get the full amount, but they’re certainly happy for what they did get. The money will help them get closer to their dream of making the Rock Creek Trail a major, north-south trail corridor. Currently, the trail extends from Rock Creek Blvd north of US Highway 26 south to Orchard Park, a distance of only 1.5 miles. When complete, the trail will extend nearly 8 miles — all the way south to the Tualatin River.

The project has been identified as a Active Transportation Demonstration Project by Metro with the goal to link housing in southern Hillsboro with employment centers and Light Rail stations to the north via “direct, accessible, comfortable, enjoyable, and safe bicycle and pedestrian connections.”

Evergreen Parkway is a high-speed, multi-lane arterial at this location. Plans for the new crossing call for removal of a 10 foot by 16 foot portion of the existing center median, sidewalk ramps, high-visibility crosswalks, new signage, and a new traffic signal. Construction is due by October 2012, but could be completed sooner.

Reader Matt Picio is familiar with the trail and this crossing. He writes via a comment below that “this is great news”:

“… Currently riders are forced to go 1/4 mile over to a fairly high-traffic intersection in order to cross Evergreen. Not very pleasant. Joggers have been cutting across the median for some time, at some risk depending on time of day. This will be a welcome improvement to that trail.”

ODOT received 90 applications worth over $37 million in this round of funding. The funds were extremely competitive as only $5 million total was available. The money comes from a mix of sources including the gas tax, vehicle registration fees, and weight mile taxes

Hopefully they do better than Tualatin Hills Park & Recreation District did with the Fanno Creek fence at SW Hall.

The fence in question was originally part of the idea to connect the trail to the corner (SW Hall @ the Albertson’s/Arby’s parking lot) but the people who put it in didn’t consult w/the public first.

I’ve been informed by THPRD’s Superintendent of Natural Resources and Trails Management that the fence posts will be removed as part of the project to connect the trail with the corner.

The completion of the project is currently being held up by weather.

THPRD has learned a lot from this fiasco, and I’m certain that situations like this will not happen again.

As someone who rides in this area somewhat regularly, the crossings of Cornell and Evergreen on this trail have always seemed super-sketchy and unnecessarily complex. Perhaps highway/transpo departments will think about these things when building the roads instead of having to spend hundreds of thousands of dollars later to make these connections. I see us advocates as important in keeping these things in their mind when projects are getting done

This is wonderful news!! I ride this every day, and it’s frustrating that there is this concrete barrier in between where the trail ends on one side of Evergreen and picks up on the other side. These improvements are great news for the Intel and Hi-Tech folks who work in this area and take the Rock Creek Trail home.

This is great news – currently riders are forced to go 1/4 mile over to a fairly high-traffic intersection in order to cross Evergreen. Not very pleasant. Joggers have been cutting across the median for some time, at some risk depending on time of day. This will be a welcome improvement to that trail.

Thanks for covering this Jonathan. Rock Creek Trail rocks and is particularly good for Washington County’s weak bike-pedestrian connectivity. However, there is a persistent problem in Washington County and elsewhere wherein multi-use trails get placed in environmentally sensitive riparian areas because there has been insufficient trail right-of-way dedication. After the developer has made is buck and is long gone, the stream corridor becomes the only available route for a trail. Thus, stream riparian areas (secured through hard fought battles by conservationists, often against short-sighted developers or politicians) become the desired trail right-of-way for many trail advocates. The protection of our most environmentally sensitive lands is pitted against the legitimate need for pedestrian connectivity. Rock Creek is not the worst case and this is a problem in other parts of the region. We need to figure out a way to make sure greenways are wide enough for people, water quality, and wildlife. Our greatest opportunities are in new urban communities like Damascus, North Bethany, Pleasant Valley, and Springwater that are building from scratch, but unfortunately this is where trail and conservation advocates are weakest. Regardless we as a region need to address this issue… and hopefully that will not involve trail advocates and conservationists fighting it out over the crumbs left in the wake of poorly planned development.

excellent! I always hated having to go around to cross to the eastbound side of Evergreen!

Evergreen Highway is WA-14 and doesn’t go anywhere near Hillsboro. Also, I hope they can afford to mark the shoulders and centerlines, that’s an impossible cycleway at night.

Technically, that area does fall within Hillsboro. The boundary is somewhat tricky, but that area falls into the Hillsboro School District in some places. But, you’re right, it doesn’t really come close to Hillsboro, but I live near there and have a Portland address. Go figure.

I’m quite aware of where the Hillsboro boundary is, I’ve ridden the Rock Creek Trail many times and I’m an active contributor to http://www.opencyclemap.org/

My point was that Evergreen Highway is Washington State Route 14. Evergreen Parkway (and further west, Evergreen Road) are in Hillsboro and have the airport, Intel, Lattice, etc…

to see a boundary map of Hillsboro.

Tualatin Hills Parks & Rec Dept was just awarded a grant by ODOT to create a mid-block crossing on Walker Rd in Beaverton for the Waterhouse Trail.

JM, would you please fix the first paragraph to correctly label the road in question? As Paul Johnson has pointed out, Evergreen HIGHWAY is in the state of Washington; the road that’s getting the new crossing is Evergreen Parkway/Evergreen Road.

This is great news (assuming they do a good job of it). This is on my daily commute as well & I hate the turn from E-bound Evergreen onto N-bound Trail.

“….removal of a 10 foot by 16 foot portion of the existing center median, sidewalk ramps, high-visibility crosswalks, new signage, and a new traffic signal. ”

I’d be very curious to know what the “new traffic signal” will be. I went to a CPO meeting a few months ago, where one of the tranportation planner folks indicated that it would be an activator that managed the timing of traffic signals at John Olsen & Aloclek, to create a period of no traffic at the cross walk (ie. a time window in which someone could cross safely). That, as opposed to an actual signal AT the crosswalk.