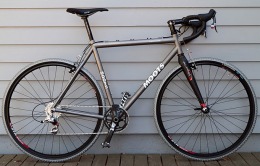 This (or a 29er MTB version) could
be yours for just $20. Seriously.
(Photo: Cyclepath)

Cyclepath, a bike shop in Northeast Portland, has stepped up to support bike advocacy in Portland. They’re currently holding a raffle with a very tempting prize to bike lovers — the Grand Prize winner will choose from a Moots cyclocross or 29-inch mountain bike fully decked-out with high-end parts and worth about $7,000.

Only 1,000 tickets will be sold and 100% of the proceeds will be evenly split between the Bicycle Transportation Alliance and the Northwest Trail Alliance. There are also several very nice runner-up prizes.

I asked Cyclepath co-owner Bill Larson why they decided to do the raffle. He said he hopes it inspires other local bike shops to get more involved with local advocacy efforts. “I think it’s very important for shops and the community to support the BTA and the NWTA,” he said, “It’s not luck that we have such an incredible bike transportation system here in Portland. It’s been a collaborative effort of community groups, individuals, progressive politicians and businesses.”

Larson credits the BTA for being a “rock solid group” for over 20 years and says, even though new off-road biking trails in Forest Park are on hold for now, the NWTA has been working on trails (literally) and access issues throughout the region. 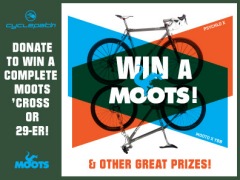 The raffle isn’t just the work of Cyclepath. Moots, based in Steamboat Springs, Colorado, also wanted to give something back to Portland in recognition of the support our city has given their brand over the years. You might not realize this, but Cyclepath is a largest Moots dealer in the country.

Larson says Moots’ President Rob Mitchell got in touch with them earlier this year to brainstorm ideas. When Larson proposed the raffle Mitchell said he’d offer up a free frame, stem and seatpost. Cyclepath has worked with component vendors for the rest of the parts. In addition to the Grand Prize, other raffle winners will get to choose from prizes donated by SRAM, Light N’ Motion, Hopworks Brewery, Rapha, Laughing Planet, Continental, Blue Gardenia Coffee, Chris King, and several other brands.

More details on the raffle, and a link to purchase tickets online, can be found on the BTA Blog.

I’m in for a couple tickets. Don’t live in, or near, Portland, but I do visit and get to enjoy the community, so its worth it.

Stand-up guys at a stand-up shop.

Other shops should take note to the level of customer service Bill, Josh, Cody and Michael provide.