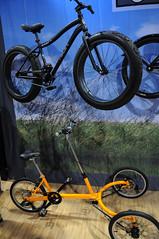 These two bikes show the range of
bikes made by Sun Bicycles.
(Photos © J. Maus)

Day Two here at Interbike and I’ve got lots of new product information and photos to share. I’ll start with Sun Bicycles, which was one of the more memorable booths I visited today in part because of their $550 (estimated retail) longtail “Atlas” cargo bike. In addition to that low-priced longtail, they’ve also got a sand bike and some interesting tadpole trikes and a handcycle.

At a show filled with lots of carbon fiber race machines, it’s great to see a company serving folks who want to ride but have special needs (the City of Portland purchased trikes from Sun for their Senior Cycling program).

Sun is a Miami-based brand that is owned and distributed by JB Importers whose headquarters are in Kent, Washington. They’ve made a niche out of making bikes for underserved niches. Brand new this year is their Atlas Cargo longtail bike. At just $550 retail, it seems like an amazing bargain for a lot of bike (I say it “seems” because I did not ride it and can’t fully attest to the quality). The Atlas is a steel beast with 21-speeds thanks to Shimavo Revo twist shifters and an Xtracycle compatible rear end (meaning it will work with all Xtracycle accessories). 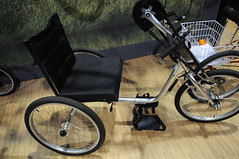 Sun also debuted a new “Spider” model which the rep called a sand bike. It’s a basic single speed with a coaster brake and immense tires for rolling over anything. It retails for $675.

Their tadpole trike (with two wheels in front) is still just a concept but it’s easy to dream up myriad uses. Their “ht-3” model is a conventional tricycle that’s powered with a hand crank. It’s designed for people who use wheelchairs.

You can find Sun Bicycles in shops throughout Portland, although I’ve specifically seen them at Coventry Cycle Works (2025 SE Hawthorne). See more photos from the Sun booth in our photo gallery.

Yeah, that yellow bike would be a great errand-runner, especially with a basket mounted in the middle.

Are those quick releases on the back of the Sun Atlas Cargo long-tail? It’s tough to tell from the photos. Would the metal plate on the rear rack prohibit comparability with the Peapod?

It took me a sec, but now I understand that the “sand bike” has a coaster brake because it’s being targeted at beach community rental fleets. The last time I renteda bike from such a place I wished for a pugsly, and this is it.

It took me a sec, but now I understand that the “sand bike” has a coaster brake because it’s being targeted at beach community rental fleets. The last time I renteda bike from such a place I wished for a pugsly, and this is it.

The Atlas Cargo should be a very well riding bike. I had input in the front end geometry. Here is a comparison http://tinyurl.com/2dh8s76
It will ride very easy at slow speeds making easy to turn for the typical “moms with kids”. Using Xtracycle’s open-source was very wise as was adding a Yuba Mundo style removable rear rack. (yes it is QR mounted, easily replaceable with bolts)